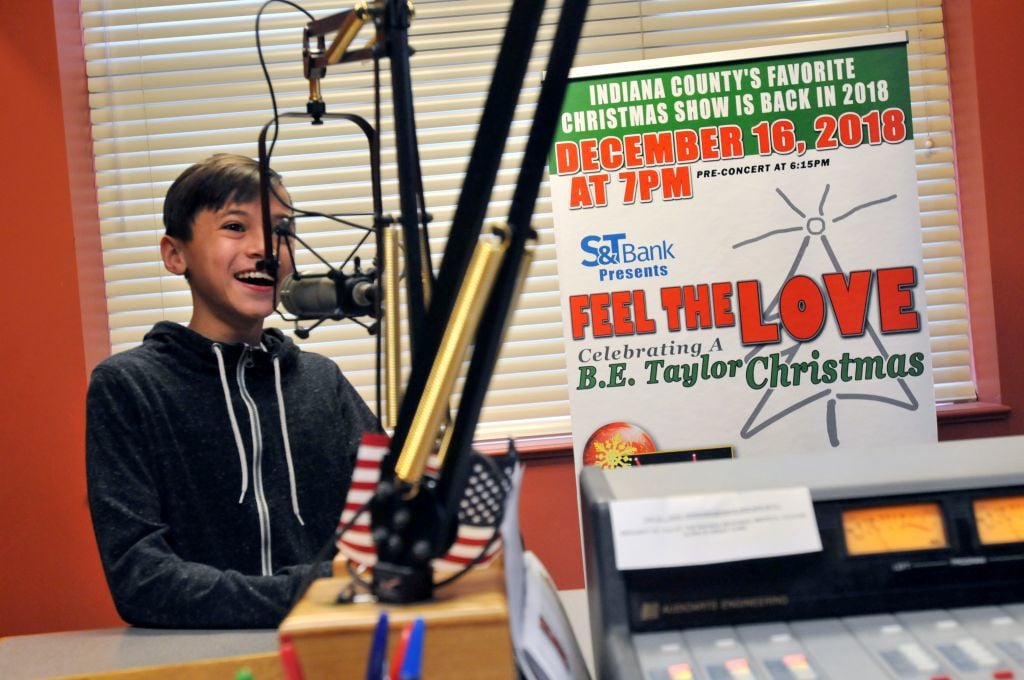 Adrian Escalona, a ninth-grader at Blairsville High School, joined Todd Marino live on air this morning at the Renda Broadcasting studio in Indiana. 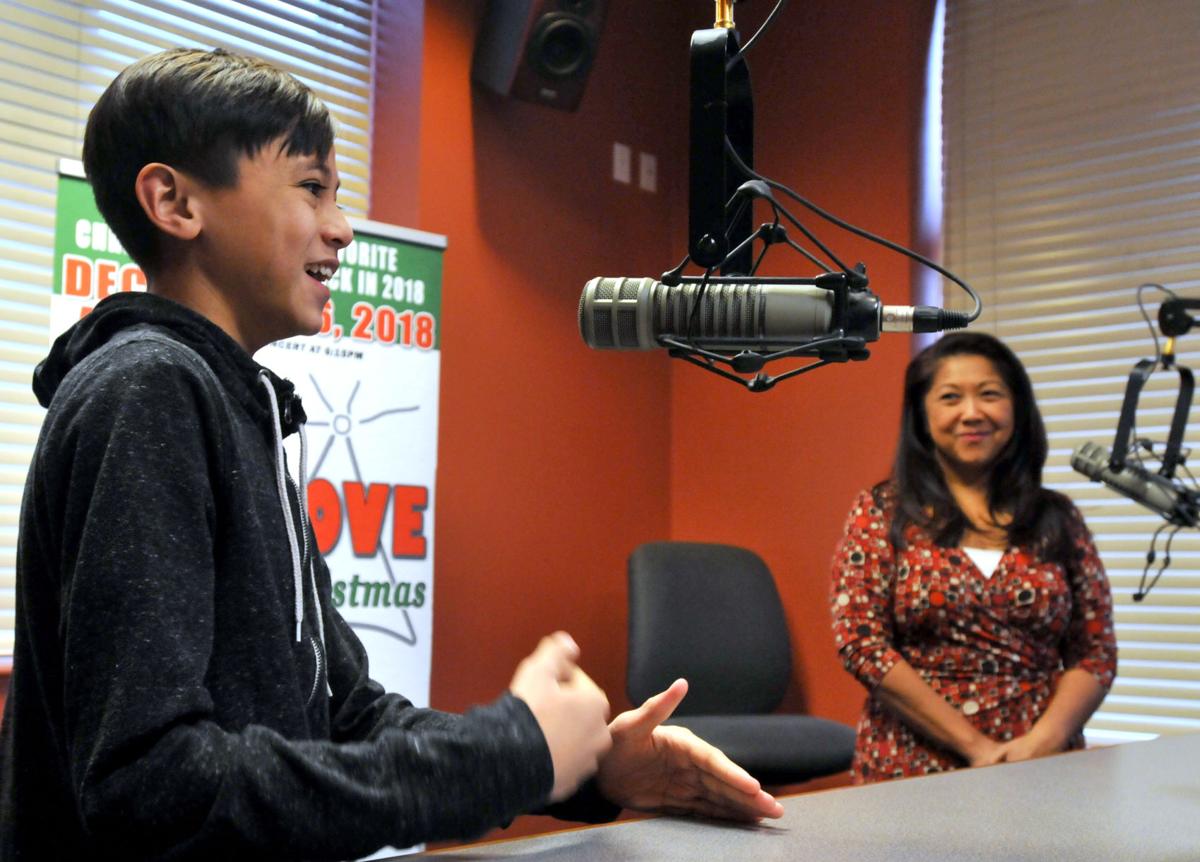 Adrian Escalona was on "Indiana in the Morning" today with his vocal music instructor, Kye-Won Choi.

Adrian Escalona, a ninth-grader at Blairsville High School, joined Todd Marino live on air this morning at the Renda Broadcasting studio in Indiana.

Adrian Escalona was on "Indiana in the Morning" today with his vocal music instructor, Kye-Won Choi.

Area music fans couldn’t ask for much more for Christmas than what the Kovalchick Complex plans to deliver to Indiana on Dec. 16.

It’s the scheduled date for a revival of the “Feel the Love” Christmas show by Pittsburgh’s B.E. Taylor Band, an annual concert that earned “tradition” status until Taylor’s death in 2016.

But the big red ribbon being wrapped around that package, announced this morning by concert promoters, is the addition of Adrian Escalona, a Blairsville student who emerged this year as an online singing sensation, as the warm-up act for the Taylor band.

It’s a combination certain to touch an emotional chord for concertgoers.

Going by the stage name Adrian Matthew, the Blairsville High School freshman gained national attention in just the last two months —  not just from the 3.2 million Facebook viewers (as of today), but from music industry leaders and world-known stars — after a casual cellphone video of Adrian singing “She Used to be Mine” from the musical “Waitresses” was shared among 45,000 viewers and earned him invitations to a Broadway production and the “Today” show on NBC.

Adrian and his vocal music instructor, Kye-Won Choi, of the Indiana University of Pennsylvania Community Music School, joined the morning show at Renda Broadcasting station WCCS to talk about his rocketing to fame during a segment to promote the upcoming Christmas concert.

“This young phenom … ” WCCS General Manager Mark Bertig introduced him on the air. “You’re going to be blown away.”

With the video rampant on social media, “She Used to be Mine” writer/singer Sara Barielles and other celebrities tweeted praise of the performance. Adrian said actor-producer Zach Braff invited him to New York City for networking with star after star, and leading to a call from Al Roker to sing live on the national “Today” broadcast.

The tour included a chance to sing with Barielles on a Broadway stage.

Nerves? Only for a minute, Adrian said.

“I was very, very nervous, I feel like anybody would be,” he told show host Todd Marino. “But as soon as I got on stage, like with anything I do on stage, I jumped right into character and I just sang the song.”

Choi said Adrian has remained remarkably grounded in his rise to fame, and still tries to keep the kind of schedule that most other 14-year-olds do: playing video games, keeping up his grades in school and throwing himself into rehearsals for the school musical.

There’s no telling where Adrian’s talent can take him, Choi said.

“He was amazing from the second I met him,” she said. “This kid, he has ‘it,’ whatever that is, and I’ve only seen it a couple of times in my life. … There’s an ‘it’ factor and Adrian has it, and I said (to his mother), ‘if he wants to do this for his life, you should foster it because he has it.’”

The plans for Adrian to join the “Feel the Love” Christmas show materialized within the past few days. Adrian said he hasn’t yet talked with B.C. Taylor — the 33-year-old son of the late band founder — to plan out the performance, but has been assembling his own set list. Marino coaxed a secret from Adrian: He plans to sing Mariah Carey’s perennial “All I Want for Christmas” in his set.

“It’s one of my favorites, just because it’s so catchy and upbeat,” Adrian said. “It’s not sad, or a quiet Christmas carol.

“I felt very overwhelmed and very honored (to be booked for the concert). I know the community is very involved, and I know this concert means a lot to a lot of people,” Adrian said. “And with the Teddy Bear Fund Drive, it’s amazing how it supports the kids. I’m very honored.”

Renda Broadcasting is the major organizer and promoter of the concert that annually raises money for the fund drive that benefits the Indiana Regional Medical Center pediatrics department and the Free Care Fund at Children’s’ Hospital of Pittsburgh. S&T Bank is a lead sponsor of the “Feel the Love” concert.

B.C. Taylor said the Dec. 16 show will amount to a reunion of most of the musicians who sat in for the past Christmas tours that his father inaugurated.

Jeff Jimerson, Rick Witkowski, Hermie Granati and a slate of western Pennsylvania talent have all signed on for the show.

Taking his dad’s role in the show is going to be a mix of emotions, Taylor said.

“I do have huge shoes to fill. Every time I set up to sing one of his songs, I am definitely reminded of that,” Taylor said. “You took for granted how unbelievably talented he was. But because of the personality he had, he was so welcoming, so inviting and so humble, that you just saw him as Dad, or Bill, or a friend. But he easily is one of the best vocalists I ever heard and that most people have heard.”

The spirit of the show that B.E. Taylor cultivated over the years makes the planned reunion show a positive emotional experience, B.C. Taylor said.

“I am so confident that I know where my father is. I am not worried about that, I know I will see him again,” he said. “And so moving forward with the show was not a sad endeavor. It’s very positive and uplifting, from the standpoint of trying to put the show on, and seeing the excitement of everybody who wants to see the show happen, and who is coming to the show.

“So it was very much a no-brainer. And on a very personal side, it enables me to perform with my dad again, because we’re using audio and video from the last shows.”