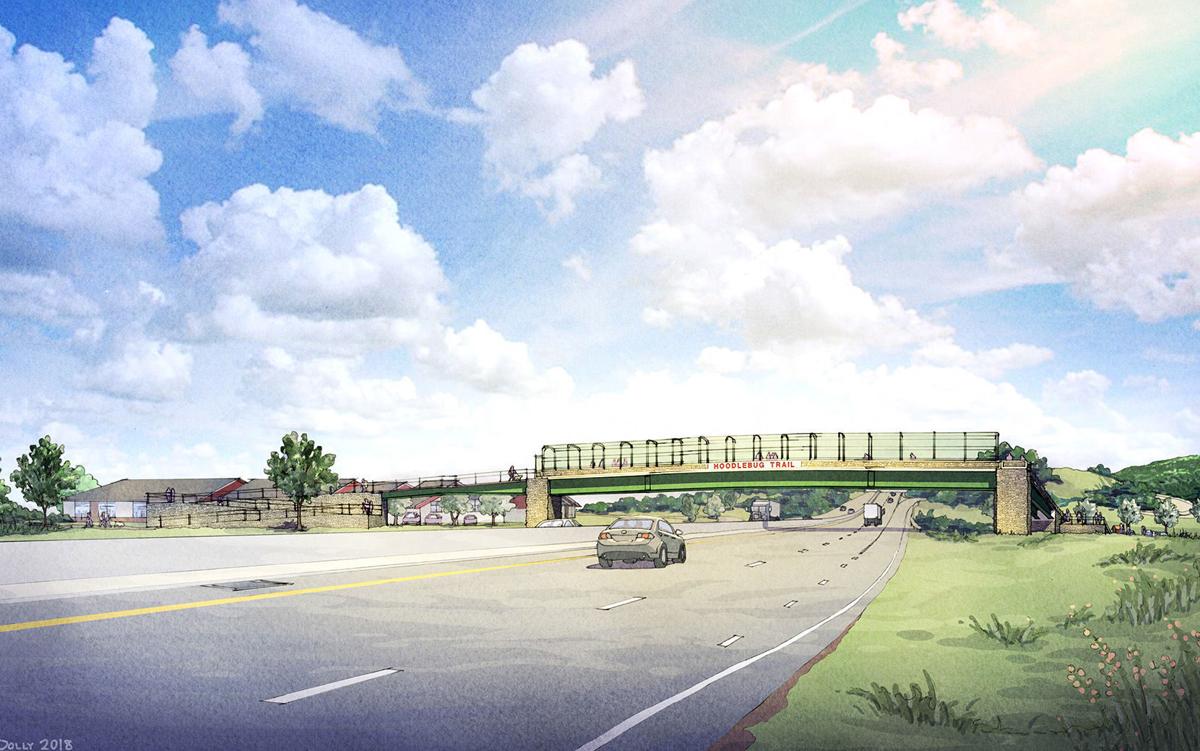 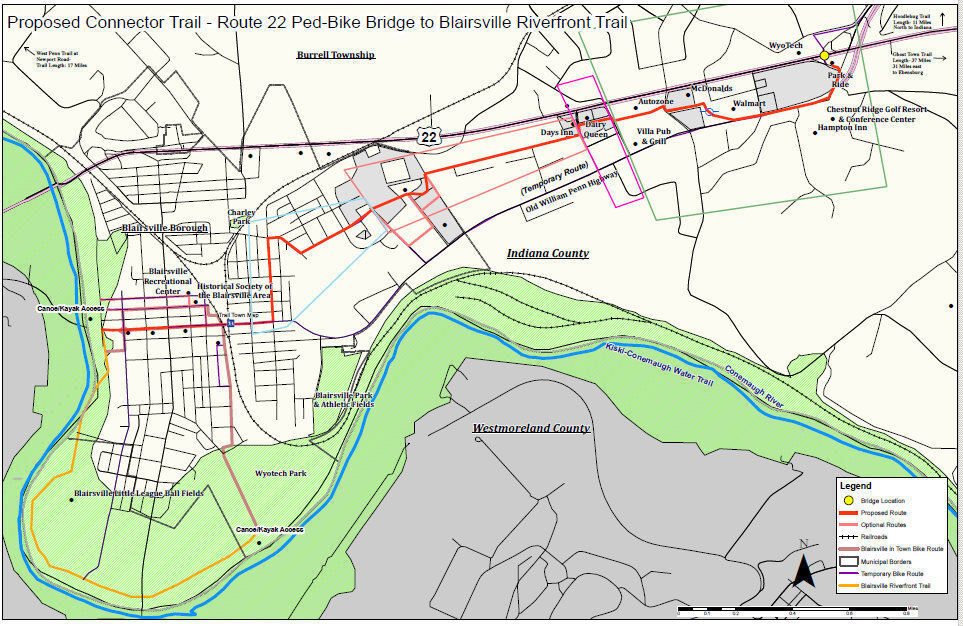 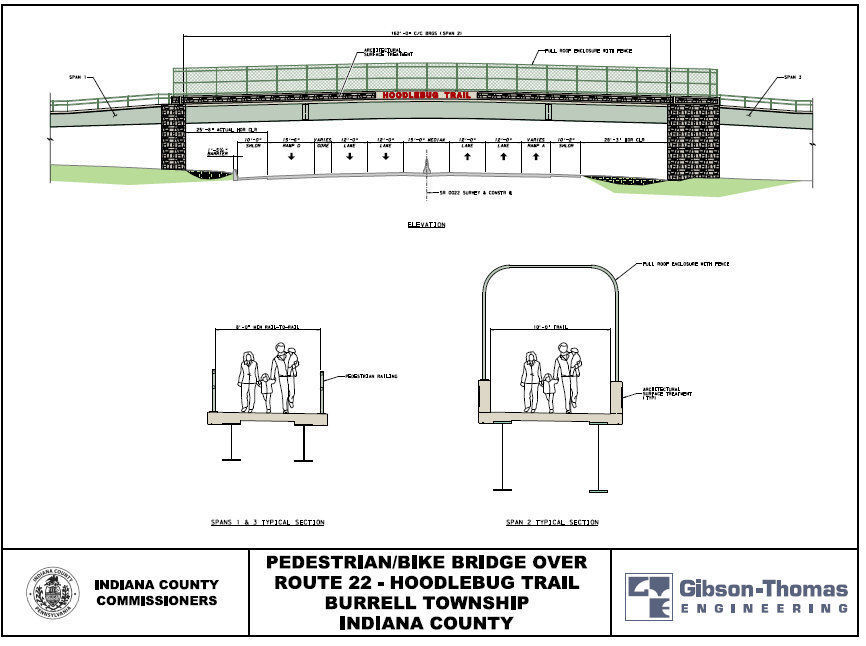 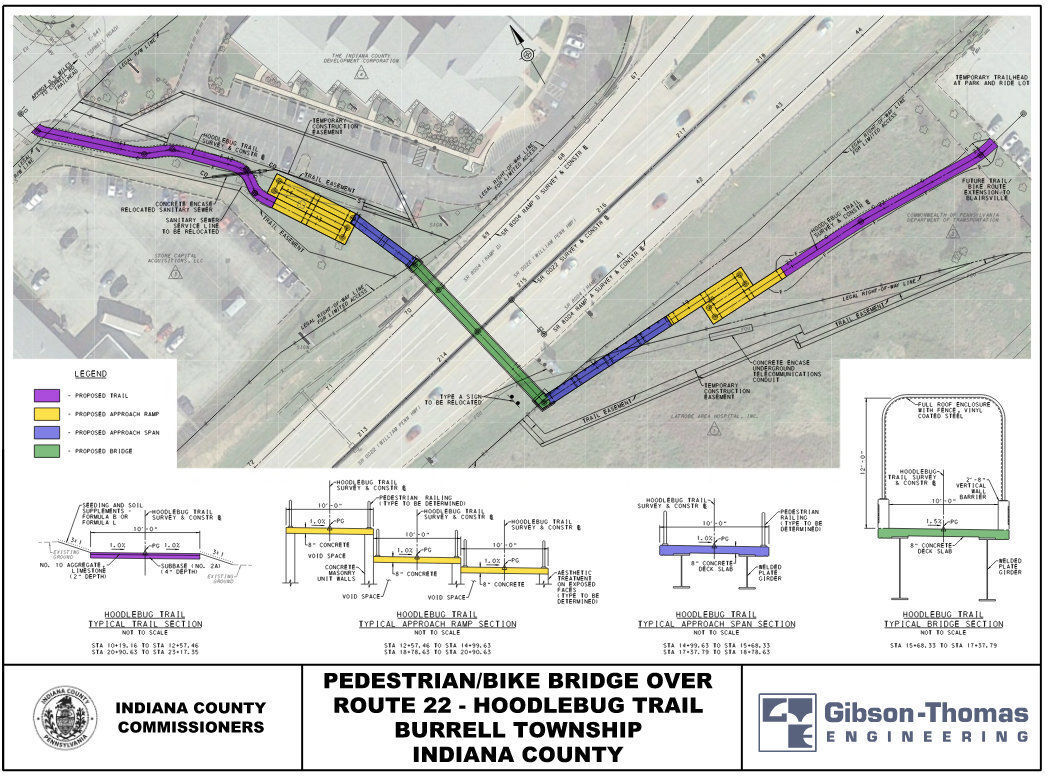 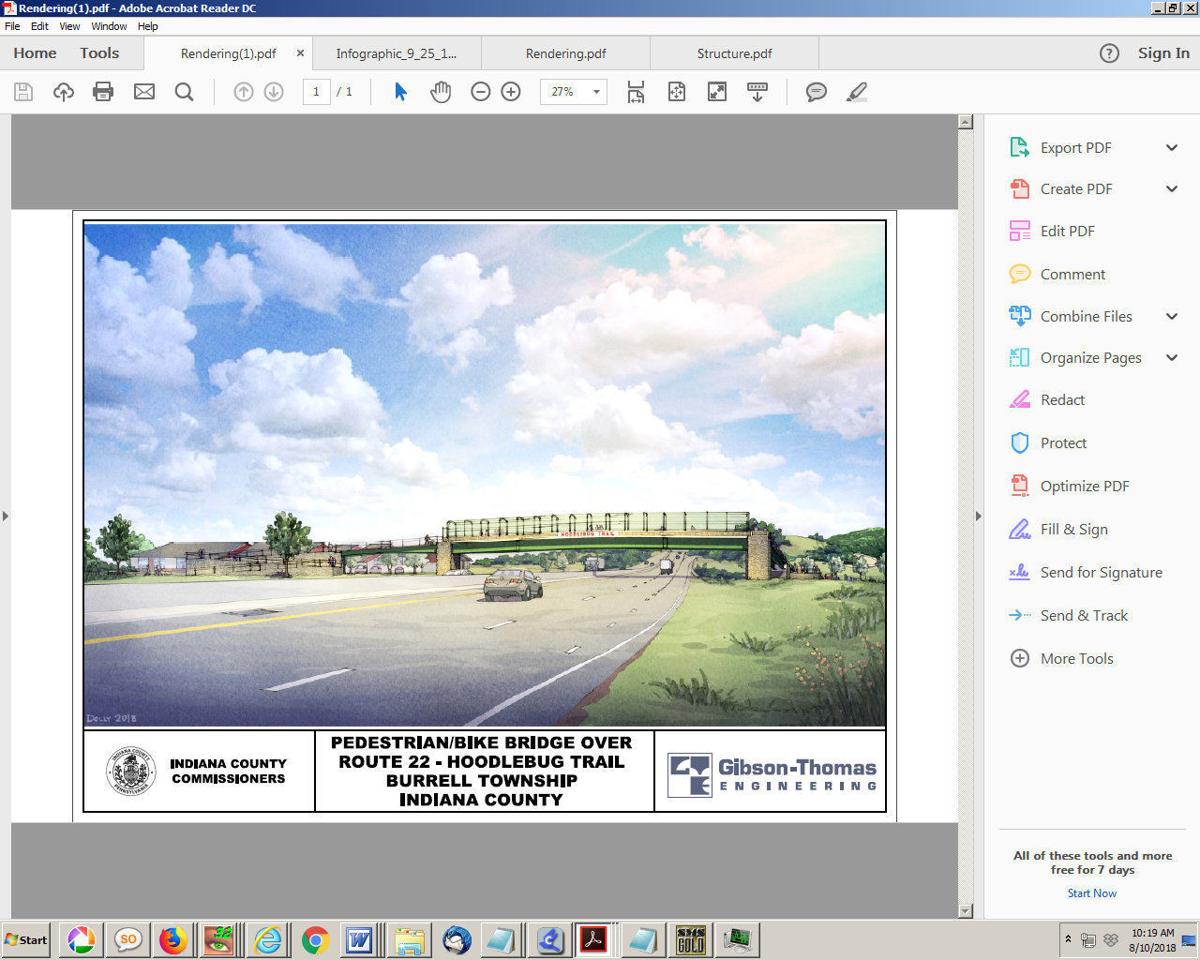 The talk of building a bridge over Route 22 west of Blairsville for exclusive use of pedestrians and people on bicycles resurrected Wednesday at the semi-monthly meeting of the Indiana County board of commissioners.

County leaders have tipped their hand to a new impetus for the $3.3 million project: it would serve as a connection from the Corporate Campus industrial park area to Pine Ridge County Park for hikers and bikers.

By their action, the commissioners authorized Indiana County Office of Planning and Development to ask the state for $230,000 toward construction of the project. And the commissioners promised that the county would put up $230,000 of its own money, “to be secured through administration of state, local and private funding sources” as a required match for the grant application.

Since its inception several years ago, the bridge has been promoted as a way to connect the popular Hoodlebug, Ghost Town and West Penn hiking and biking trails that all have paths north of Route 22 and the Riverfront Trail south of the highway in Blairsville.

The project has long faced opposition from a faction of residents of Burrell Township, led by the township board of supervisors, who rejected the county’s proposed site plans for the project in May 2019 and October 2019.

The commissioners, through county Solicitor Matthew Budash, filed an appeal to Indiana County Common Pleas Court in November 2019, seeking an order from a judge to direct the township to approve the plan and grant a construction permit. Budash withdrew the appeal in August and county officials renewed their effort to present a site plan that would meet the township’s approval.

Little has been heard of the project since October, when commissioners Mike Keith and Robin Gorman attended two public hearings held at the Black Lick fire station to take county residents’ pro and con views of the bridge plan.

No proponents of the plan spoke. A strong contingent of opponents voiced their disapproval at the second of the hearings.

Keith and Gorman, who were elected in November 2019 and took office in the midst of the controversy, said they were undecided on the proposal and wanted to weigh all opinions.

On Wednesday, Joshua Krug of the planning office said the county is going for money from Pennsylvania Department of Community and Economic Development.

“Once constructed, the bridge will increase safety through the corridor for pedestrians and bicyclists and link together business, educational and employment centers along the Route 22 corridor,” he told the commissioners. “The project will connect more than 38 miles of trail in Indiana County, allowing for future potential connections as well, such as a connection to Pine Ridge Park.”

Krug mentioned the plan to tie Hoodlebug and Ghost Town trails, which meet at Saylor Park in Burrell Township, but said nothing of West Penn Trail or the Blairsville trail.

The Burrell Township supervisors on Friday were unmoved by the county’s pursuit of construction money and repeated long held objections to the plan.

Extension of the West Penn Trail from its end point east of Blairsville is improbable because of the unlikelihood of being permitted a way across, over or under the CNX railroad, supervisors Larry Henry and Dan Shacreaw said.

“You can’t touch the CNX right of way to do anything,” Henry said. “They don’t even return phone calls.”

The Blairsville trail along the Conemaugh River has no committed path into Burrell Township to reach the park-and-ride lot near the interchange of Routes 22 and 119, where the bridge would be anchored on the south side of the highway, the supervisors said.

Their understanding was that the county has placed priority on the idea of a link to Pine Ridge Park as a revenue generating venture.

Commissioners Keith and Gorman told the township officials that creating a hunting, fishing, camping destination in Pine Ridge Park could increase revenue for the county Department of Parks and Trails, Shacreaw said.

“I can’t see that happening without destroying Pine Ridge,” Henry said. He questioned whether campers staying at Pine Ridge Park would ride their bikes three miles on the road to reach the bridge or simply leave their bikes on their vehicles to get to the existing trail head.

Henry and Shacreaw said the plans still don’t address the idea of formally extending the Hoodlebug and Ghost Town trails from the top of Mile Hill along Route 199 to Corporate Campus, the proposed north end of the bridge. They believe it would be cost-prohibitive for the county to meet right-of-way and safety requirements demanded by Pennsylvania Department of Transportation.

The only commissioners’ only comment on Krug’s request Wednesday was a clarification by Gorman that Pine Ridge Park is a county property, “not a state park. I want to make sure everyone is sure that we have interest in it,”

In tandem with the application to DCNR, the commissioners approved Krug’s request to also designate $1.7 million that had been awarded to the county in December 2014 from the Pennsylvania Department of Transportation Multimodal Transportation Fund for the construction of the hiking and biking bridge.