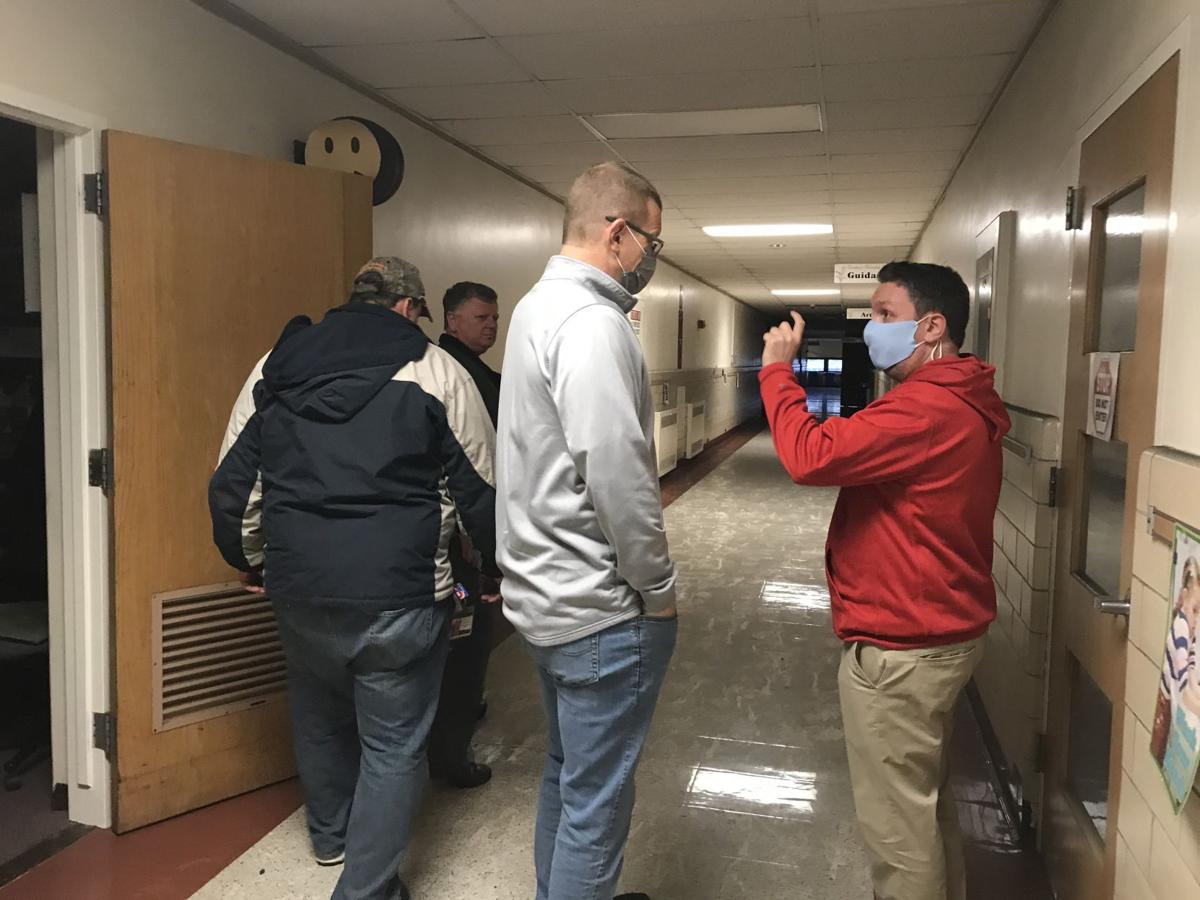 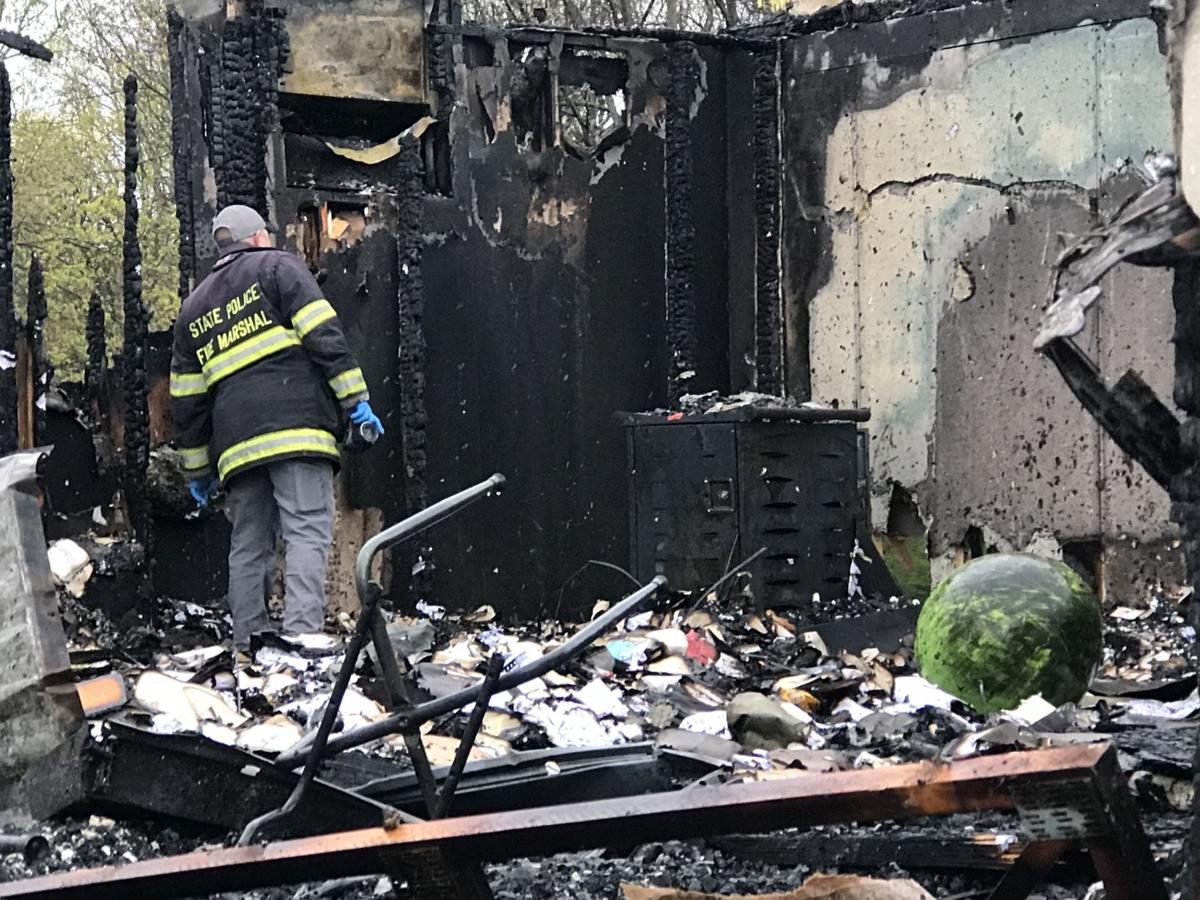 Trooper Chet Bell, a fire marshal from the state police Troop A headquarters in Greensburg, inspected the rubble of a modular classroom that burned early Friday in Indiana. 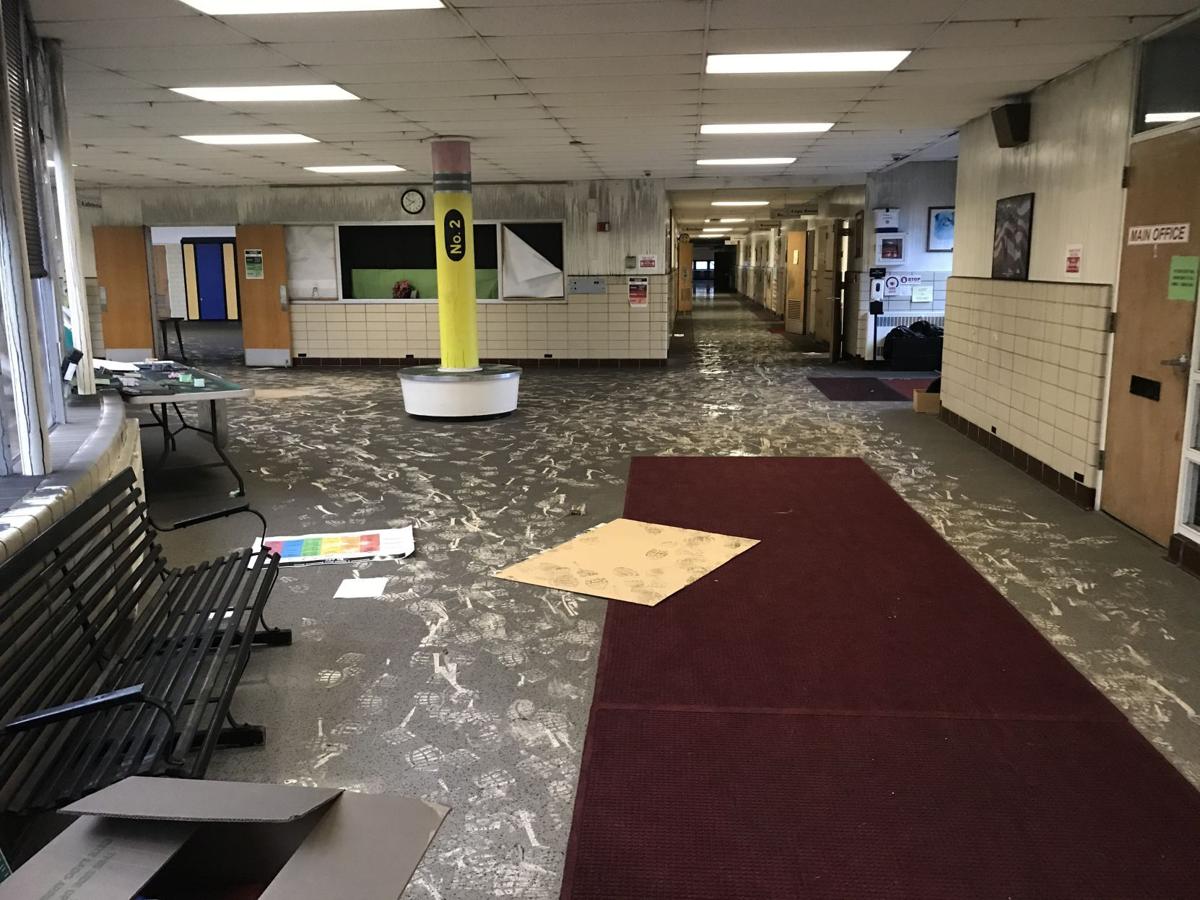 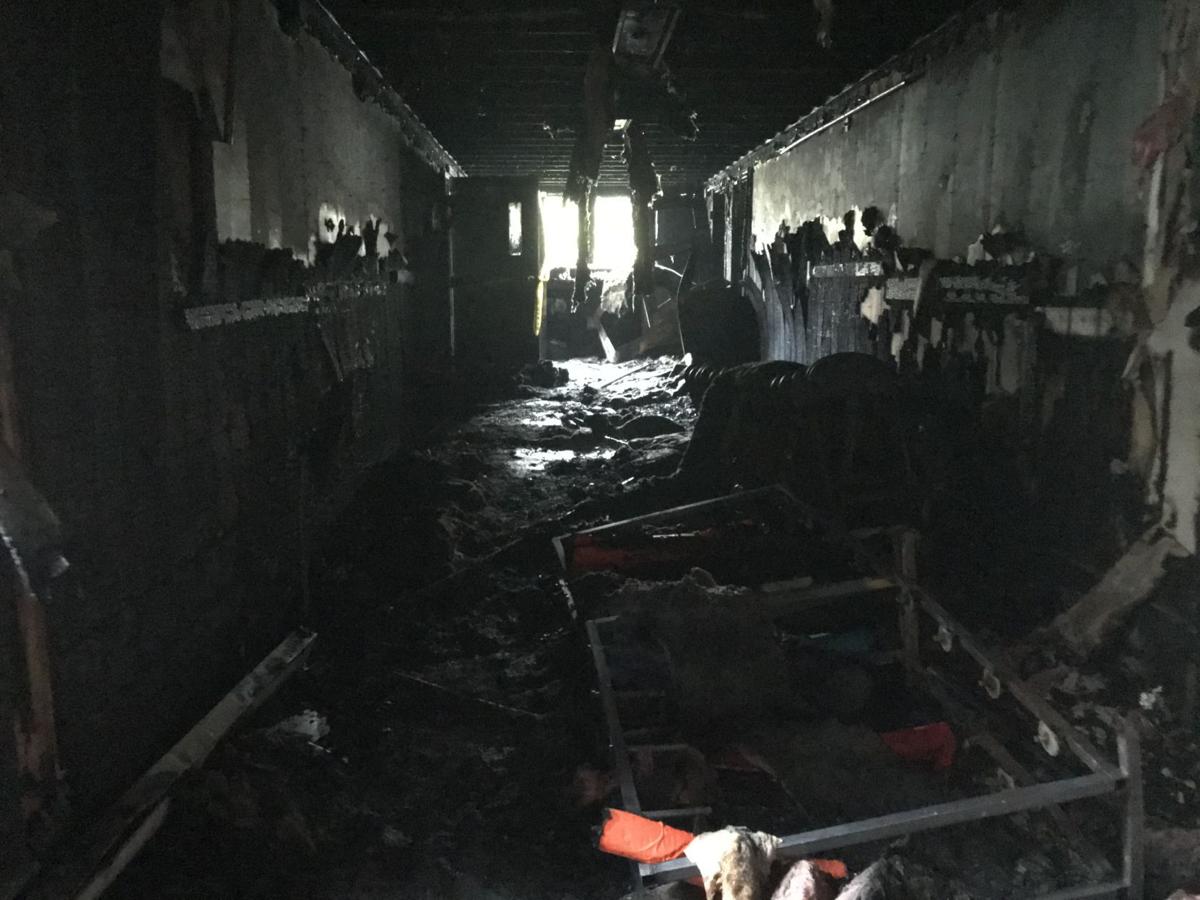 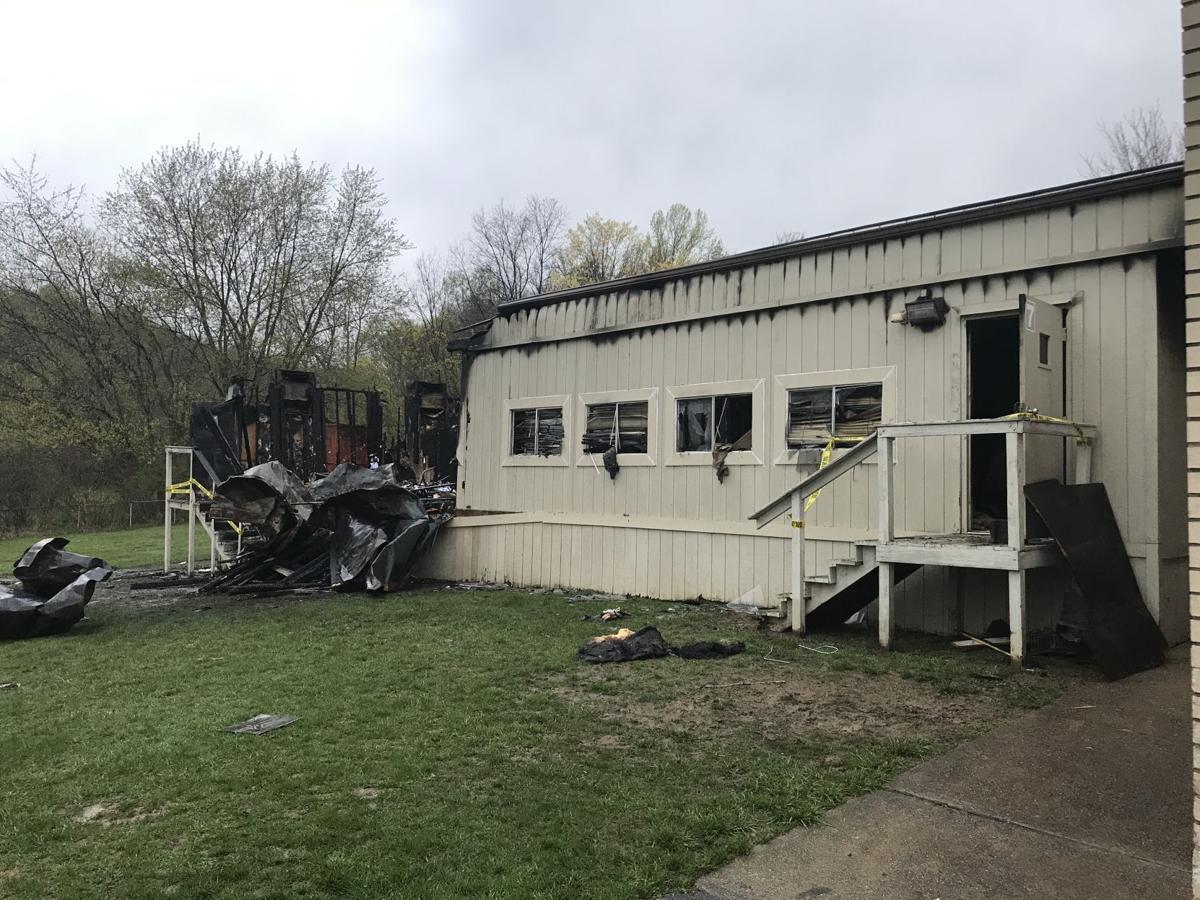 Fire destroyed the modular classrooms attached to the west side of Eisenhower Elementary School early Friday. No one was reported to have been injured.

Trooper Chet Bell, a fire marshal from the state police Troop A headquarters in Greensburg, inspected the rubble of a modular classroom that burned early Friday in Indiana.

Fire destroyed the modular classrooms attached to the west side of Eisenhower Elementary School early Friday. No one was reported to have been injured.

Clearly there was a level of anxiety for Indiana Area school administrators who were told at 2 a.m. Friday that Eisenhower Elementary School had caught on fire. The blaze broke out in a modular classroom and spread to another on the end of the west wing of the 1950s vintage school in Indiana’s Third Ward.

Some smoke got into the main building, they were told.

It was immediately evident, when they actually entered the school after sunrise Friday, that this wasn’t the kind of smoke that some fans and some cans of Glade air freshener would solve.

It rose to the level of a catastrophe for the people of the district, Vuckovich said later.

The early morning call for students and teachers to revert to online classes for the day would have to be extended, but by day’s end Vuckovich and his administrative team said Eisenhower students’ days of stay-at-home learning would only last a few more days.

But instead of returning to “Ike,” the school’s students will be split up among two other district buildings.

Beginning Wednesday, the 70 fourth-graders will move into Horace Mann Elementary School and the 83 fifth-graders and their teachers will have classes at Indiana Area Junior High School.

Vuckovich laid out the plan in an open letter to district families published Friday evening.

“Due to the damage and process necessary to restore the facility, the building will have to be closed for the remainder of the school year,” Vuckovich wrote.

He noted the blessing that the fire broke out when no one was in the school and that the losses were material — things “that for the most part can be replaced.”

Neighbors were the first to discover the glow of the fire just before 2 a.m. Friday.

The two “trailer” classrooms had been installed at the school in the 1990s and as recently as February had been under discussion by the Indiana school board for replacement with brick-and-mortar classrooms.

One was fully engulfed and the flames spread to the second and destroyed it as well.

Indiana volunteer firefighters concentrated their efforts on stopping the fire from spreading to the main structure, but the flames gutted the connecting corridor and spewed sooty smoke into the west wing corridor.

Suspended ceiling tiles collapsed in the main building classroom closest to the modular rooms. Grimy soot covered the walls and floors for the length of the corridor. Doors to the classrooms were open, and the windows of some rooms had been opened to help in ventilation.

The administrators brainstormed on the fly. The extent of the grime to the main entrance of the school, the front office area, and down the south wing made it clear that the school couldn’t be ready for classroom teaching soon.

Vuckovich and Heinrich said they would take on the logistics of getting the students back to in-person learning, their top priority. Vuckovich asked Trout and Travis to look into the property restoration issues. They expected Business Manager Jared Cronauer to work with the insurance agencies.

And they expected the smoked-out school to top the agenda for the Monday evening meeting of the school board’s Buildings Grounds & Transportation Committee.

Community sentiment quickly unfolded on social media. Many residents praised the firefighters for preventing a greater disaster. Others rallied to the support of the teachers, who already endured the trial of the lengthy pandemic closure and helped to assure health and safety during the reopening of the classes only to now face the return to at-home learning.

Some Facebook groups, including Indiana County Adopt-A-Teacher, took promises of support from those willing to help replace uninsured losses such as learning supplies contaminated by smoke in the classrooms.

State Trooper Chet Bell, a fire marshal based at Greensburg, explored the rubble of the ruined classrooms after daybreak and said Indiana Borough police would take the lead in the investigation. He said he didn’t expect to release much information from his probe.

“Chances are, the insurance company will have to get here and see what they want to do with it,” he said. “Unless there’s evidence of a crime, I’ll stay out of it for the most part.”

Bell offered no immediate theory on how the fire began.

The borough police reported late Friday that the cause still was unknown.

Vuckovich said one of the modular classrooms served as a computer lab, and small group sessions were held in the other.

Eisenhower has an enrollment of 200 students in fourth and fifth grades, including 10 who take cyber classes in the IDEAL system and 32 who log in from home for synchronous learning with 158 classmates in the building.

Eisenhower School is laid out in an “L” shape with all classrooms, offices, the kitchen and multi-purpose room on one floor. Its wings meet at the corner of School Street and Wine Avenue.

“Our team has been hard at work assisting the insurance company, investigators and restoration crew in response to the fire, and developing a plan to get the students from Eisenhower back in front of their teachers as soon as humanly possible,” Vuckovich explained in his letter. He said he was optimistic that the back-to-school plan would begin as planned.

“Due to COVID-19 restrictions, it will be necessary for us to divide the students and staff up between two locations as we work through the last seven weeks of the school year.”

While the students and staff at the three other elementary schools and two secondary schools will hold to their normal schedules Monday and Tuesday, Vuckovich said the Eisenhower teachers would post their day’s assignments by 9:30 a.m. on those days.

“We understand that remote learning days are a burden to our families, but these synchronous days are necessary to give our teachers and staff the time they need to prepare the rooms at Horace Mann and the junior high so they can be student-ready by Wednesday.”

On the Indiana Fire Association’s Facebook page, fire officials said crews from the Latrobe and Greensburg fire departments were summoned with heavy-duty ventilation equipment to blow heavy smoke from the school.

“They are true heroes,” Vuckovich wrote to the parents. They “put themselves at risk for our community, and we are so thankful for their dedication, courage and expertise.”

The Commodore, Brush Valley, Plumville and Coral-Graceton fire departments were put on standby.

There were no reports of injuries.