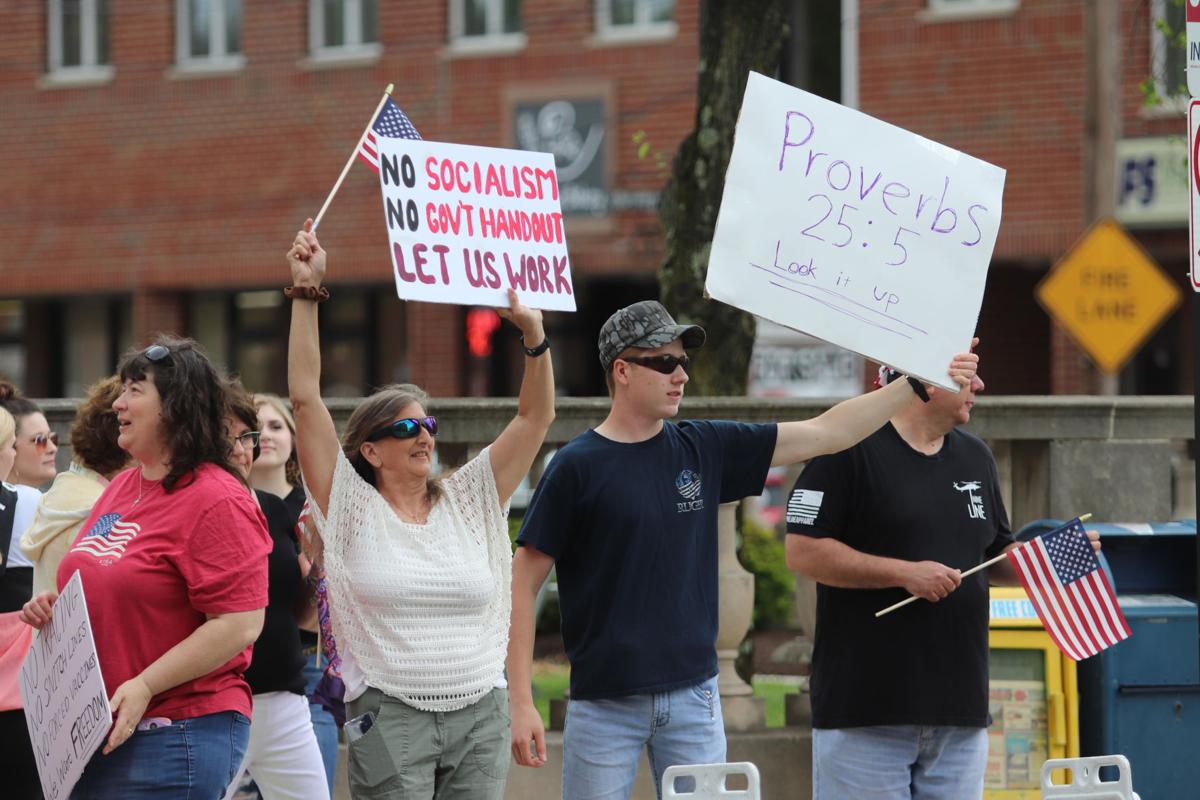 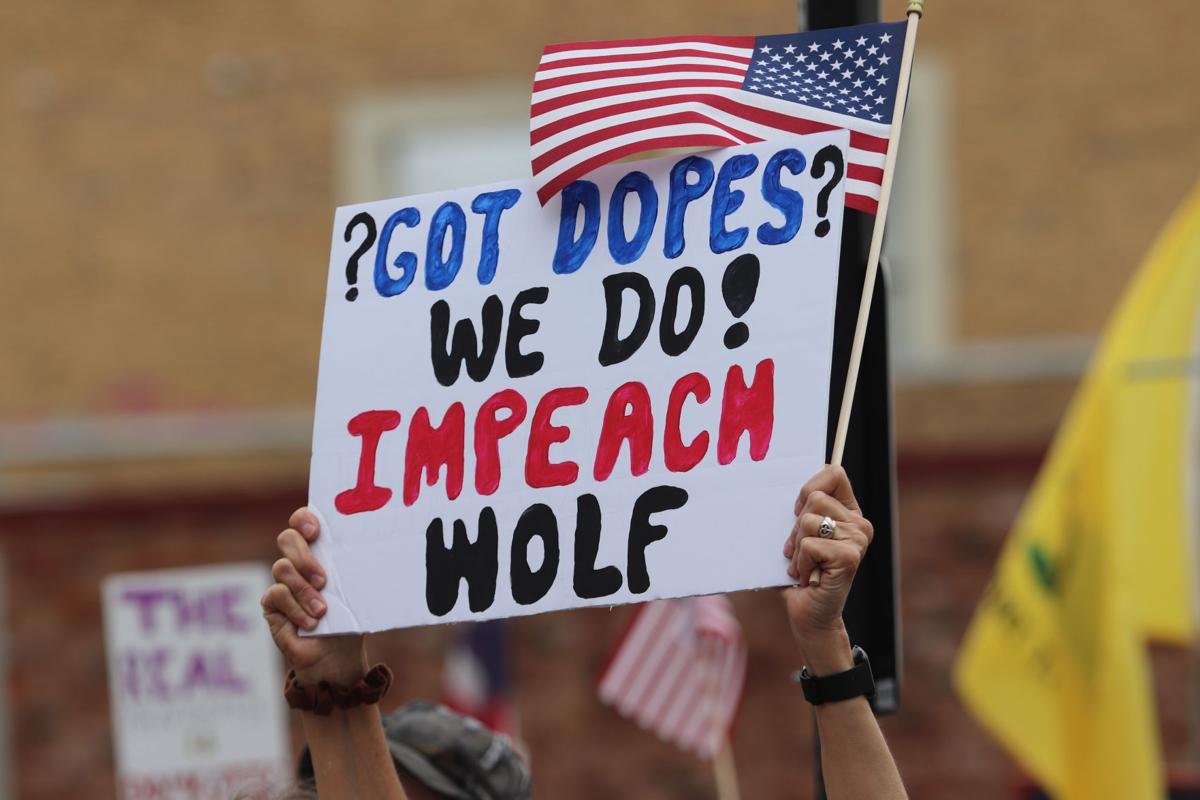 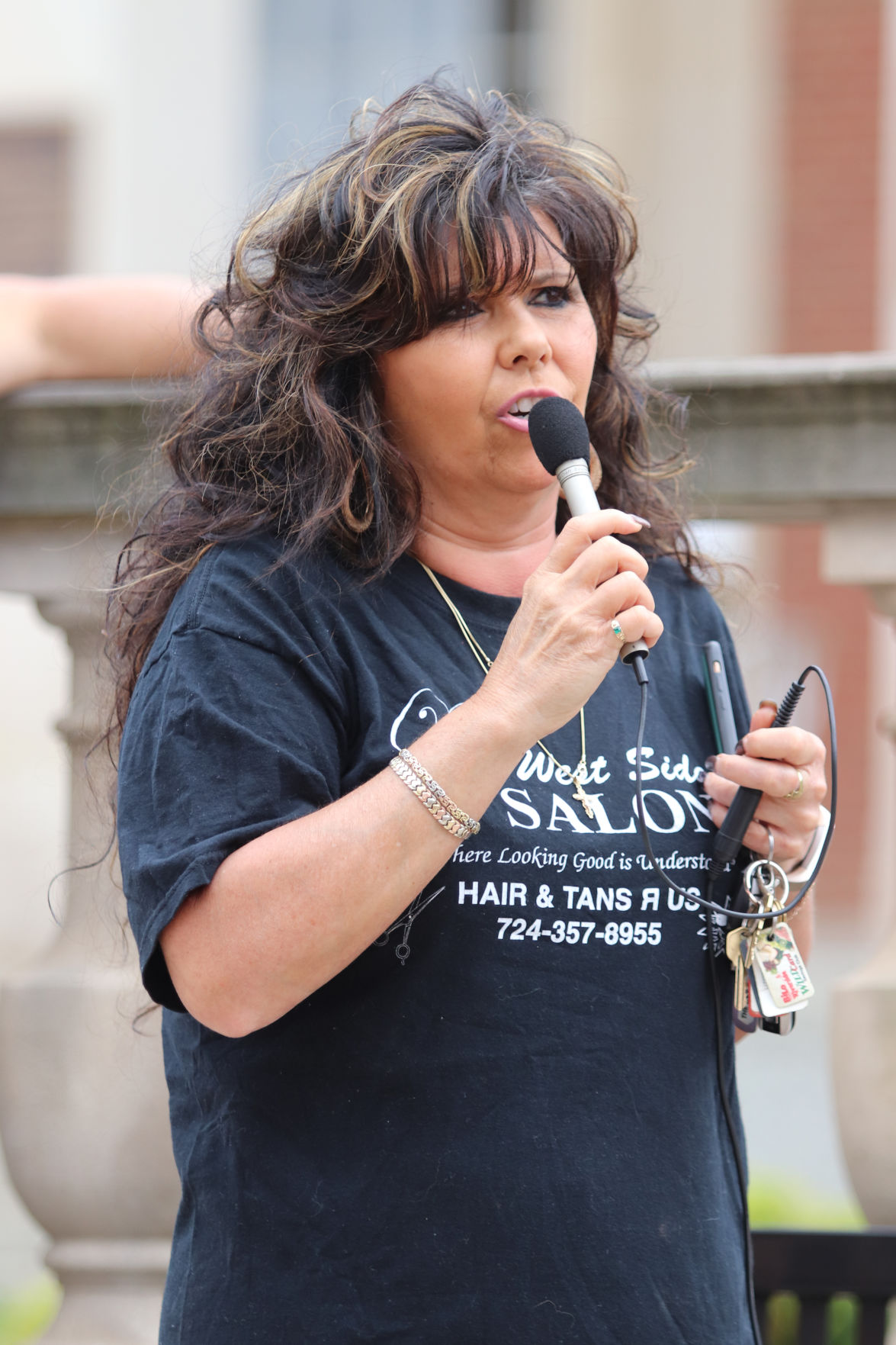 Approximately 50 people of all ages gathered on the sidewalk outside the Indiana County Court House on Thursday for a rally in favor of opening up shops and stores now ordered closed as nonessential in Pennsylvania.

“There is no reason we can’t be open as salon owners and stylists,” said Michelle Stewart of D’s 422 West Side Salon along West Pike, White Township. “Get us back to work, we want to take care of you.”

Salon owner Diane Dalessio joined her in addressing the gathering of about 50 along Philadelphia Street.

“I started my salon in 2002 with a $1,000 bond that I cashed in to get my business going,” Dalessio told the rally. “This isn’t fair that day cares can be opened and little kids are running along, playing with the same toys, no one is masked at day cares, but hair salons are not allowed to operate where you can’t pass Lowe’s up without you seeing a hundred cars over there on a daily basis, or by the hour.”

Pennsylvania Gov. Tom Wolf was a principal target of the rally. Signs ranged from calls for his impeachment to Scripture such as Psalm 33:12 (“Blessed is the nation whose God is the Lord”), and from opposition to “forced vaccines” to a boy’s “Tom, stop wolfing down small businesses.”

But elected officials also were criticized by a speaker whose wife and daughter are hairstylists, unable to work since Wolf imposed COVID-19-related restrictions in March. Those restrictions included the listing of many businesses, such as beauty salons and barber shops, as nonessential.

“(State Rep.) Jim Struzzi actually had to go to bat for my daughter,” former county commissioner candidate Bob Colgan said. “In that courthouse are elected officials that ought to have their cans out here supporting you. But they sit up there. Some of them even have spouses that are hairstylists. They should know what you’re going through.”

One elected official, county Auditor Donna Cupp, did leave the courthouse to address the demonstrators, citing historic events including the American Revolution and the aftermath of the 19th century battle at the Alamo.

“Those people had to have courage, and this nation was built by people who had courage, not by people who sat back in fear,” Cupp said. “We’re a nation of risk-takers. All of you who started a business, you took a risk. No one paid you to start your salons, you started them yourselves, and this government wants to quash you and say, ‘you can’t work.’”

“The restrictions and mandated closures in Pennsylvania over the past two months handed down by executive order from the governor and secretary of health (Dr. Rachel Levine) have been confusing and frustrating for all of us, to say the least,” Sheiness read. “The inconsistencies in Gov. Wolf’s policies and seemingly haphazard ways in which he selected who could remain (open) and who must close have lacked reason and clarity.”

Struzzi said he has pressed for reversal of Wolf’s policies, both in legislation that Wolf vetoed, and in letters he has sent the governor. Colgan read Pittman’s email.

“Respectful advocacy and protest are a cornerstone of our republic and I appreciate your efforts to highlight the real life consequences of Gov. Wolf eliminating your ability to sustain your livelihood,” Colgan read. “Over these past several months our commonwealth has been strained like never before.  And while I respect Gov. Wolf’s efforts to keep people safe, there clearly have been errors in judgment. The notion a small town barbershop or salon cannot operate safely, yet big box retailers can, just doesn’t make sense.”

Thursday’s rally was the latest exercise of community support in the Indiana area for lifting the COVID-19 restrictions.

Tammy Graham Curry, an organizer of the May 1 “We-Care/avan Cruise to Support Small Business in Indiana,” urged participation in a “FUNdraising Small Business Rally” Sunday from 1 to 4 p.m. at the Indiana County Fox and Coon Hunters Association along Ramsey Run Road in White Township.

She also shared stories of two men who tried to reopen barber shops, Rick Anderson in Indiana and Joe Kosmack in Homer City, focusing on Anderson.

She said a “community activist” and perhaps another salon operator turned Anderson in to the state board that regulates barber shops.

“This man has been devastated,” Curry said. “That was his dad’s legacy. His dad used to cut my hair in the summer.”

At least one teacher found common cause with others at the rally.

“William Penn would be rolling in his grave,” said Greg Hartnett, a Homer-Center teacher who hoisted a “Don’t Tread On Me” flag. He added, “I believe in liberty.”

The rally included a spontaneous recitation of the Pledge of Allegiance, as well as a singing of “God Bless America” by Rodney Allhouse, who was born in Indiana in 1945 but still runs an online business “so I go to work every morning,” he told the crowd.

The governor has said barber shops and hair salons cannot reopen before counties move from red and yellow phases into the green phase of recovery. Indiana is among counties in the yellow phase.

Meanwhile, as Colgan read to the crowd outside the courthouse, Pittman promised that the Senate would continue “to pursue common-sense policies to responsibly reopen our economy and I am hopeful the governor will move even faster to get the livelihoods of so many back on track.” The senator asked the gathering to “keep the faith and please pray for all of your elected officials.”