A growing wave of concern over the undermining of firearms owners’ Constitutional rights reached the Indiana County Court House on Wednesday, when representatives of the Indiana County Second Amendment Sanctuary group asked the county commissioners to stand with them.

The talk among the residents and the commissioners was not confrontational but concluded with Commissioners Robin Gorman and Sherene Hess — in the absence of Chairman Michael Keith — making clear that they would not hastily commit the county to a formal position on the issue.

Greg Cornman, of Blairsville, led off the contingent of gun owners, who had been among scores of sportsmen and others who attended the Second Amendment Sanctuary group’s meeting over the weekend at an outdoorsmen’s club in White Township.

Tom Short and Frank Renosky followed Cornman in asking the commissioners to adopt an ordinance that would prohibit the county from taking part in, or especially expending public money on, any restriction of firearms that would violate the Second Amendment.

To an extent, the commissioners — Gorman, a Republican who promoted her position as a sportsman and firearm owner in her campaign for election last year, and Hess, a Democrat — carefully worded their basic agreement with the residents that the Second Amendment and its corresponding provision in the Pennsylvania Constitution are indeed the law of the land.

“The ordinance would just defend our legal rights as law-abiding citizens who have guns — and we don’t want to be the only county that doesn’t say that,” Cornman told the commissioners. “We’re not going to be unique in this. It’s a big movement and I’d rather do it calmly.”

“And I very much appreciate you bringing his forward,” Hess said. “But I honestly don’t know much about the particular issues that affect this. I think it’s important for us to deliberate as a body, all three commissioners.”

Renosky asked Gorman and Hess whether they had received and reviewed a copy of the generic text of an ordinance that the gun owners want the commissioners to consider, and said he would be pleased if that proposal had at least gained the board’s attention, “for you to say yes or no and go forward from there.”

The six-page draft ordinance has language that both strikes down any effort to infringe on the Second Amendment and comes short of expanding the protections that the amendment currently affords. 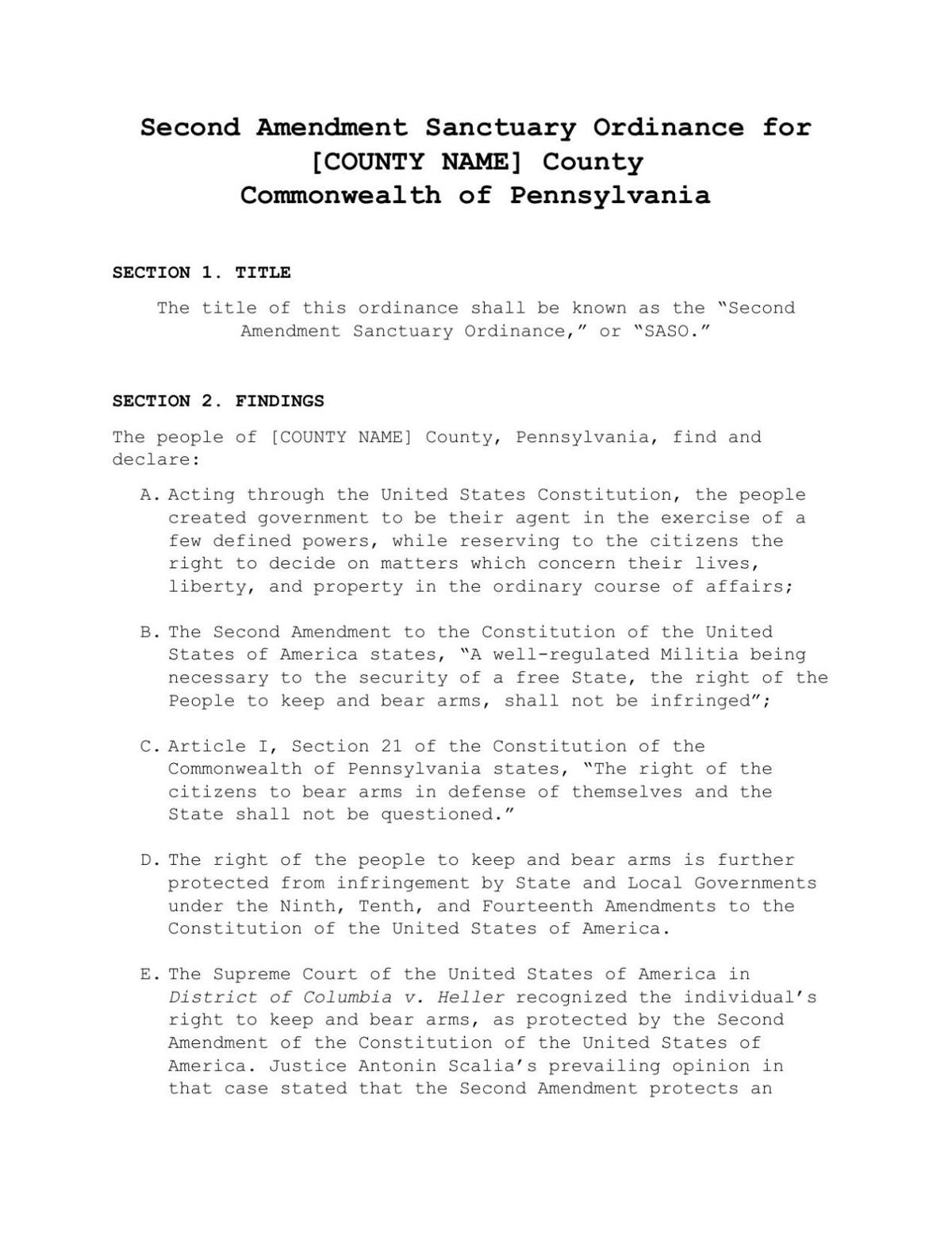 “The protections provided to citizens by this ordinance do not apply to persons who are prohibited from possessing firearms under federal law; or permanently prohibited from possessing firearms under the laws of this Commonwealth pursuant to conviction in a criminal court,” it reads. And, “This ordinance is not intended to prohibit or affect in any way the prosecution of any crime for which the use of, or possession of, a firearm is an aggregating factor or enhancement to an otherwise independent crime.”

“I just got involved not too long ago … but it’s a sample of what we feel should be voted on and we’ll go from there. We’ll make it very amicable,” Renosky said.

“Any template of something that you’re thinking about would be very helpful to us,” Gorman said. “And I can’t thank you enough for coming out today.”

“We’ve gotten along all his time with both sides having pretty equal balance,” Short told the commissioners. “But some people get excited, they see a gun and they’re in panic mode, but that’s not what it’s about. … I believe that this, if done properly, is a great thing. I hope that we can all work together on this.

“The gun people are never going to give anything up. None of us have hurt anybody and we wouldn’t be sitting here if we did. But there are two sides to every story and I expect to be up to my chin in the whole thing,” Short said.

“I do agree that the majority are law-abiding people, and I appreciate that you’re working hard on this,” Hess said.

“I believe, too, in what you said, but we have a lot of other important issues that we need to focus on and we certainly don’t need to go back and fine tune our Second Amendment rights,” Gorman said. “Our constitutional rights are not debatable.”

The Indiana County Second Amendment Sanctuary group is headed up by Deborah Shreckengost, the county coordinator for SASO, who manages and promotes its philosophies, chiefly on Facebook.

According to the social media page, the sanctuary group plans on holding at least two more organizational sessions in northern and southern sections of Indiana County and is planning an event at the courthouse on March 6.