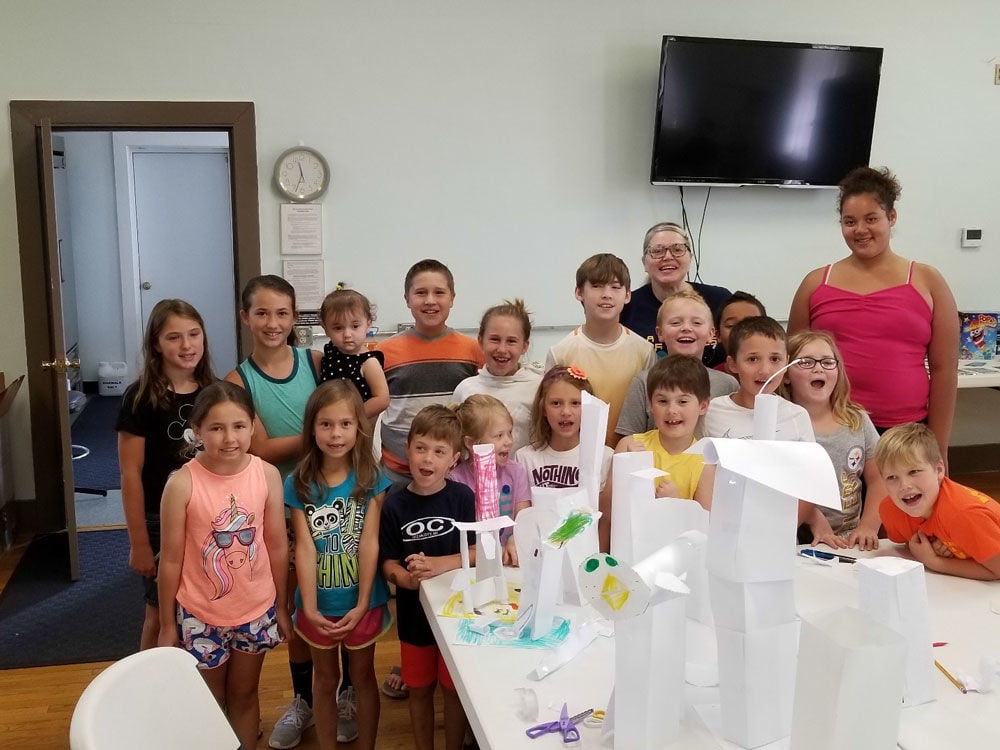 The Burrell Township Library presented Summer Quest 2019 “Universe of Stories” from July 11 through Aug. 15. The summer children’s program was supported by The Indiana County Endowment grant. The program, titled “Build an Alien City,” encouraged the children to work together to establish a city with several required elements such as a free-standing, 12-inch-tall structure, a designated area such as a park and other three-dimensional structures. 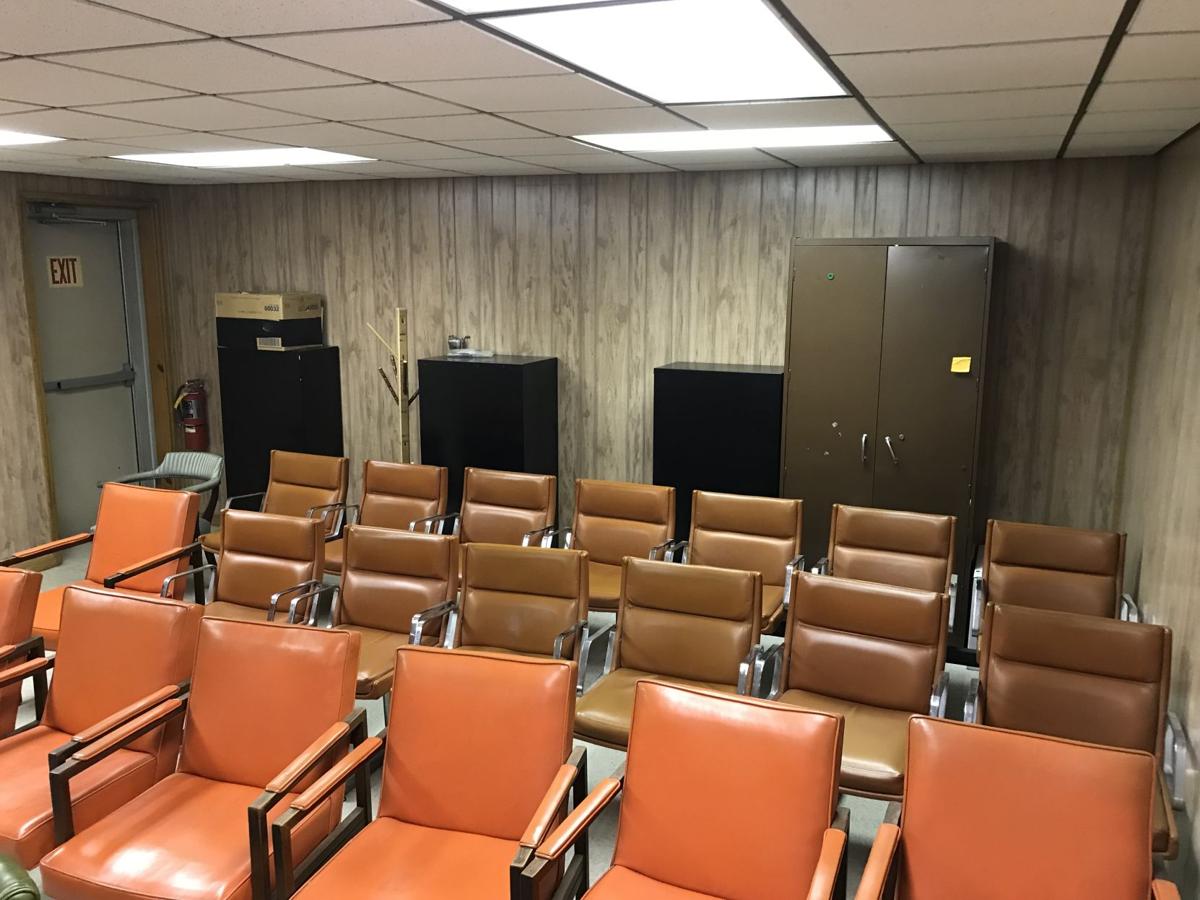 The last two rows of spectator seating will be removed from the township meeting room to make room for the interim home of the Burrell Township Librar. 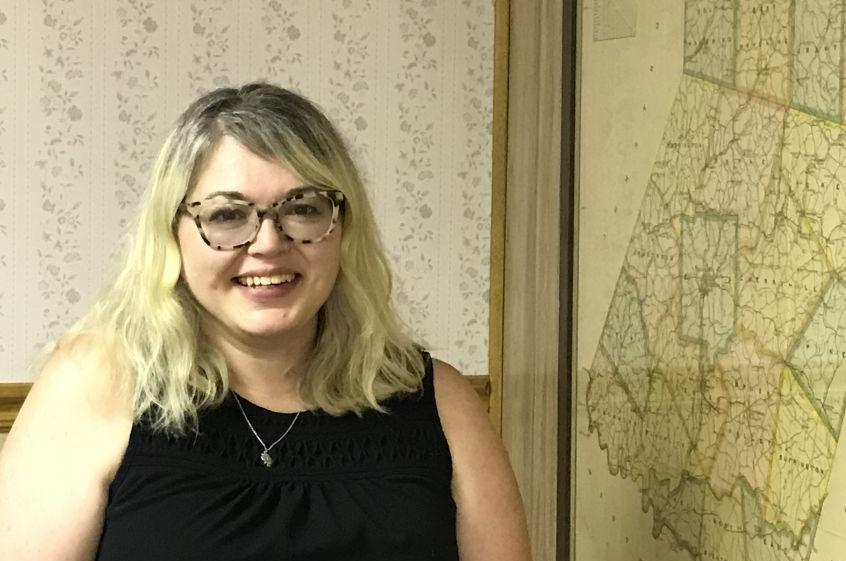 BLACK LICK — For the first time since the doors closed 19 months ago, the Burrell Township Library has found new floor space — and tabletop and bookshelf space –– and will resume regular hours of operation next month.

Library Director Jan Van Hannak said Wednesday that the library will set up to serve township readers, although at a fraction of its past size, in the meeting room of the township office, under an agreement with the board of supervisors.

Opening day is set for Sept. 5. The plan is to operate about eight hours a week on Thursdays and Saturdays, with a portion of the book collection available for circulation and time set aside for children’s story hours and other programs.

Significant in the plan, Van Hannak said, is the intent to provide laptop computers, internet access and Wi-Fi hotspots for community use.

The library’s longtime home was condemned and vacated in January 2018 after a water leak developed on a winter weekend and showered the office with a continuous stream of water until the staff came in on a Monday morning. The water ruined the flooring, and a damage inspection revealed further damage from drainage problems in the crawl space.

Plans for relocating and reopening the library have led to a proposal for a single larger building on the site to house the library and the township, with separate offices and a shared community room. Of several applications for state grant assistance to return the library to operation, some have been denied, one was approved and others are pending.

Van Hannak said the library and township agreeing on the makeshift library space — earmarked to take the place of the last two rows of seating and several file cabinets at the rear of the supervisors’ meeting room — was necessary at this time to maintain the library’s recognition by state Office of Commonwealth Libraries.

In other business, the supervisors:

• Reported that they attended a meeting to discuss a Florida group’s interest in reviving the shuttered WyoTech campus in the Corporate Campus industrial park and the student housing complex along Wyoming Drive.

“There is somebody looking at it,” Shields said. “It’s our understanding that they purchased the school but not the buildings yet.”

“Basically they bought it for $15 million,” Henry said. New Village Initiative is the prospective developer, he said.

“The problem is that ‘A’ owns the buildings, ‘B’ owns the property and ‘C’ has a lease on it,” supervisor Dan Shacreaw said. “Same with the apartments.”

They didn’t discuss the prospects of the plan being completed soon.

“We don’t see that happening because there’s nothing going on yet,” Shields said.

• Tabled their planned vote to adopt an ordinance requiring property owners to mow their lawns.

The ordinance puts the onus on residents to cut the grass so it’s less than eight inches high, and a provision that came under question makes them responsible to cut the grass all the way to the edge of the street, including land they don’t own on the township right-of-way.

Former township supervisor Anthony Distefano praised the board for bringing the ordinance to a vote but said, logistically, that some parts are unenforceable.

“I agree with it, it’s a good idea and it’s been a long time in coming,” Distefano said. “I don’t have a problem mowing the township right-of-way because it’s the right thing to do. But what part of Pennsylvania law allows a township to force owners to maintain property that is not theirs?”

The wording was almost copied and pasted from the tall grass ordinance in place in White Township, said Supervisor Chairman John Shields.

Distefano also suggested reconsideration of the provision that owners “shall remove said cuttings or mowing from the said premises.” Raking up the clippings from the three lawns he mows, including the steep, 16-foot wide township-owned embankment along the road, is not his priority, he said.

Supervisor Larry Henry agreed: “I’m not going to pick up the clippings.”

The supervisors unanimously voted to rewrite the ordinance and advertise it for public review.

• Offered for public review two audit reports, both of which were “clean” reviews of the township finances: one, the municipal annual audit and financial report for the year ending Dec. 31, 2018, by Rennie & Associates CPA, and the other, the independent report of the Pennsylvania Auditor General’s review of the township Highway Transfer Program and Turnback Account for the year ending Nov. 13, 2017.