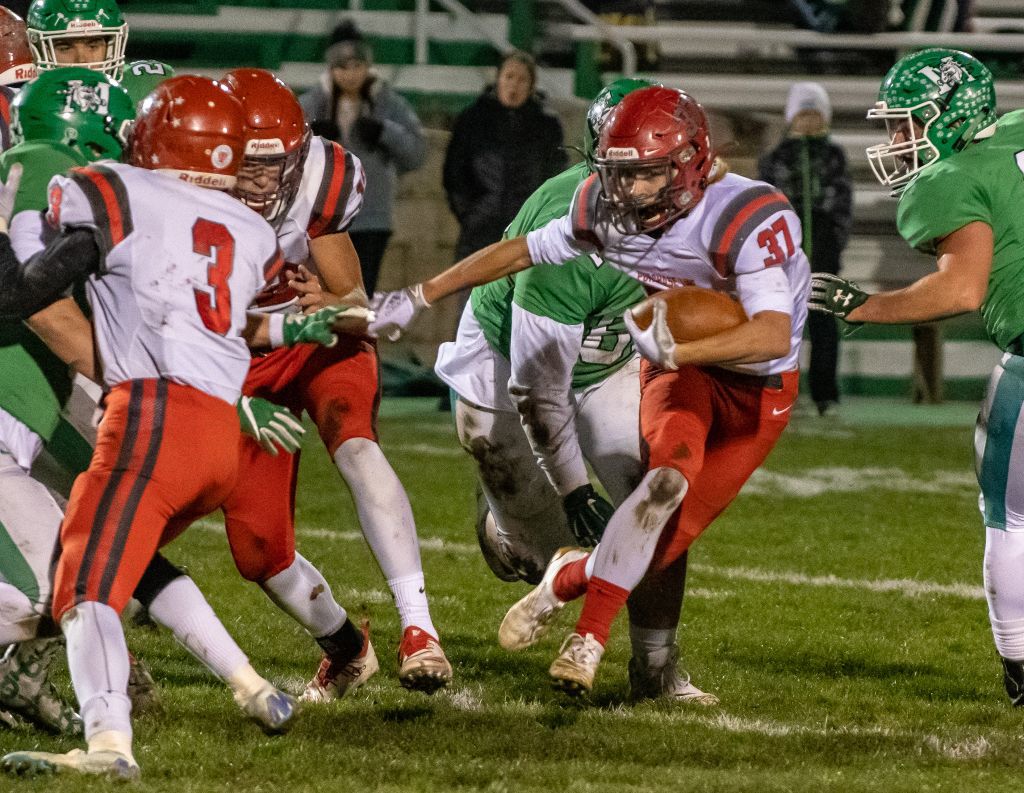 Kyle Day rushed for a game-high 124 yards in Purchase Line’s victory in the District 6 Class 1A quarterfinals Friday night. 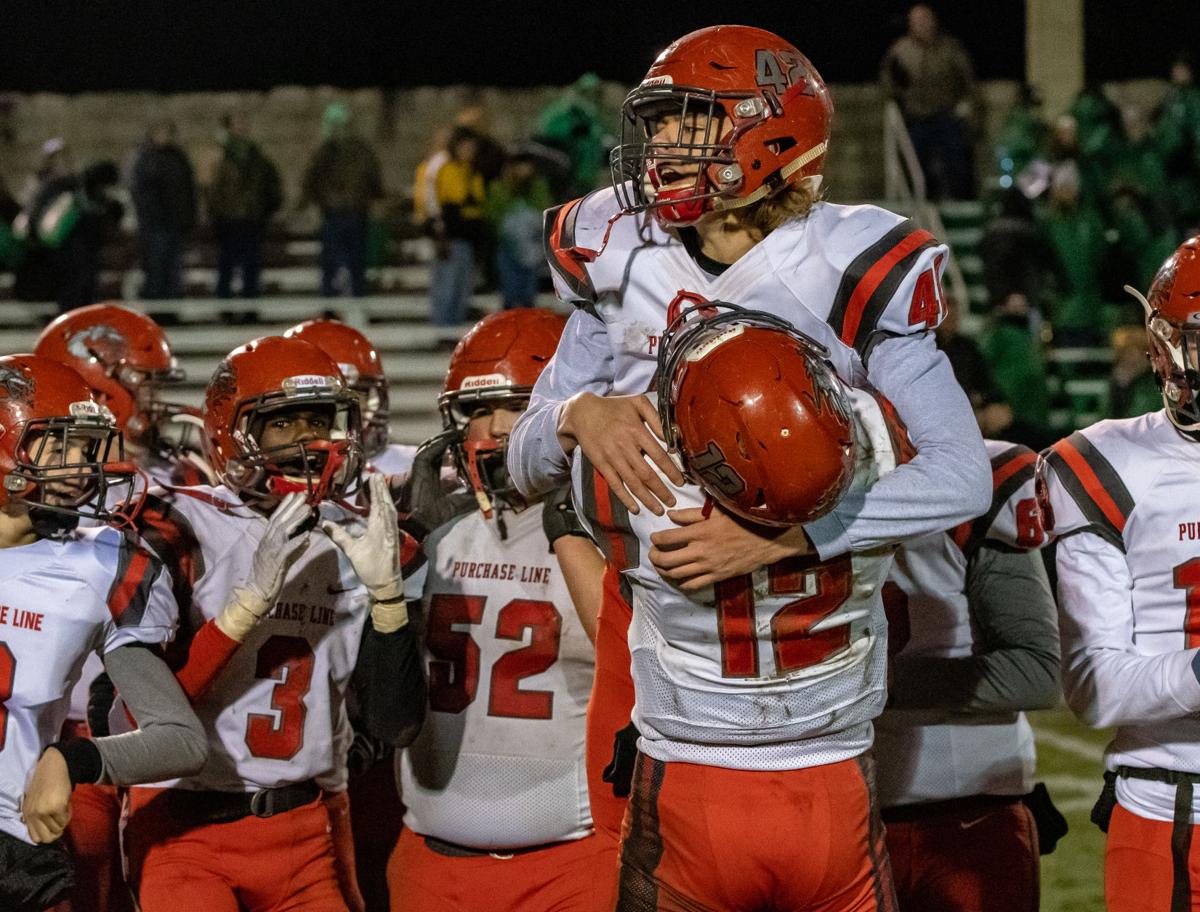 Now the red-hot Red Dragons appear to be taking their best into a position that they haven’t held in more than a decade: a spot in the Final Four.

Despite hitting the road without the team’s leading running back, Purchase Line racked up more than 300 rushing yards behind the senior trio of Kyle Day, Cullen Goncher and Jacob Barnett against No. 2-seeded Portage. And the seventh-seeded Red Dragons came within one offensive miscue of pitching a shutout as they parlayed a fast start and an early 19-0 lead into a 25-6 victory over the host Mustangs in a District 6 Class 1A quarterfinal football game Friday night.

After scoring touchdowns on each of its first three possessions and holding a team fresh off of a first-round bye to three first downs in the first half, Purchase Line all but cruised to its first semifinal playoff berth since 2008.

“We thought it was going to be a close game, a battle throughout,” Day said. “And that first quarter, it put something into our heads. I can’t even explain what happened. We just played amazing all-around, everywhere. … Our defense is playing amazing and we’re just getting started on what we’re doing on defense.”

Purchase Line (8-4) will visit the winner of tonight’s game between sixth-seeded Homer-Center and third-seeded Juniata Valley in the semifinals next weekend.

The trek will not only signify the steady improvement of the team under third-year coach Matt Falisec, but also a long-overdue return for a program that hasn’t had a championship berth within sight since before its current players had finished kindergarten.

And Friday night’s victory over Portage certainly helped erase some of that stigma considering the Mustangs dealt the visiting Red Dragons that 26-7 loss in the semifinals 11 years ago, one year after Purchase Line’s last district title game appearance.

Portage (8-3) entered the playoffs with just one loss since mid-September — against Purchase Line’s Heritage Conference foe Ligonier Valley in the Appalachian Bowl in the Mustangs’ regular-season finale — and scored a conference-best 356 points in WestPAC play.

Of course, that meant little when the Red Dragons’ ball-control offense and stingy defense took the field on this frigid night. And with a trip to the semifinals now on the docket, Purchase Line is one step away from securing a chance for a district championship on the artificial surface at Mansion Park in Altoona.

“I think we are a better than what our record showed all year and we’re starting to peak at the right time,” Falisec said. “And we get to play another week of football in November. And that’s all you want all year, is to get these kids to the turf and see what happens. We have one more ladder to climb.

“We’ve got 11 seniors and they keep pushing us all week. And every day we’re out there, it’s freezing cold, but we love it. That’s how you know you’re in playoff football.”

Playing without senior running back Josh Syster — a 1,370-yard rusher who exited last week’s 20-12 first-round win over Blairsville with a knee injury that could cost him the rest of the season — Purchase Line never sputtered as its rushing offense, which ranks second in the area, flattened Portage’s defense.

Day capped Purchase Line’s opening 71-yard drive with a 6-yard touchdown, and Barnett scored on runs of 16 and 13 yards from his quarterback position to give the Red Dragons a three-score lead less than five minutes into the second quarter.

With its three-headed rushing attack in sync, the Red Dragons did not attempt a pass in the first half.

“We were all clicking,” senior two-way starting lineman Andre Wray said. “There was no confusion. We were just working together and getting stuff done. It feels great.”

Portage finally halted the visitors’ onslaught on the first play of the Red Dragons’ fourth possession. The Mustangs returned a Barnett fumble 44 yards for a touchdown that cut the score to 13 before halftime, 19-6, although Falisec said he believed his quarterback was already down on the run.

“The kids played tremendously,” Falisec said. “The first quarter was probably the best football we’ve ever played all season, 19-0, and the one touchdown they do get was by our offense fumbling the ball, supposedly.”

And after Purchase Line forced a three-and-out to begin the second half, the Red Dragons responded as Barnett completed his first of only two pass attempts, a screen that Day took 22 yards to forge the final score.

Day led the Red Dragons with 124 rushing yards on just 10 attempts, including four that spanned at least 20 yards.