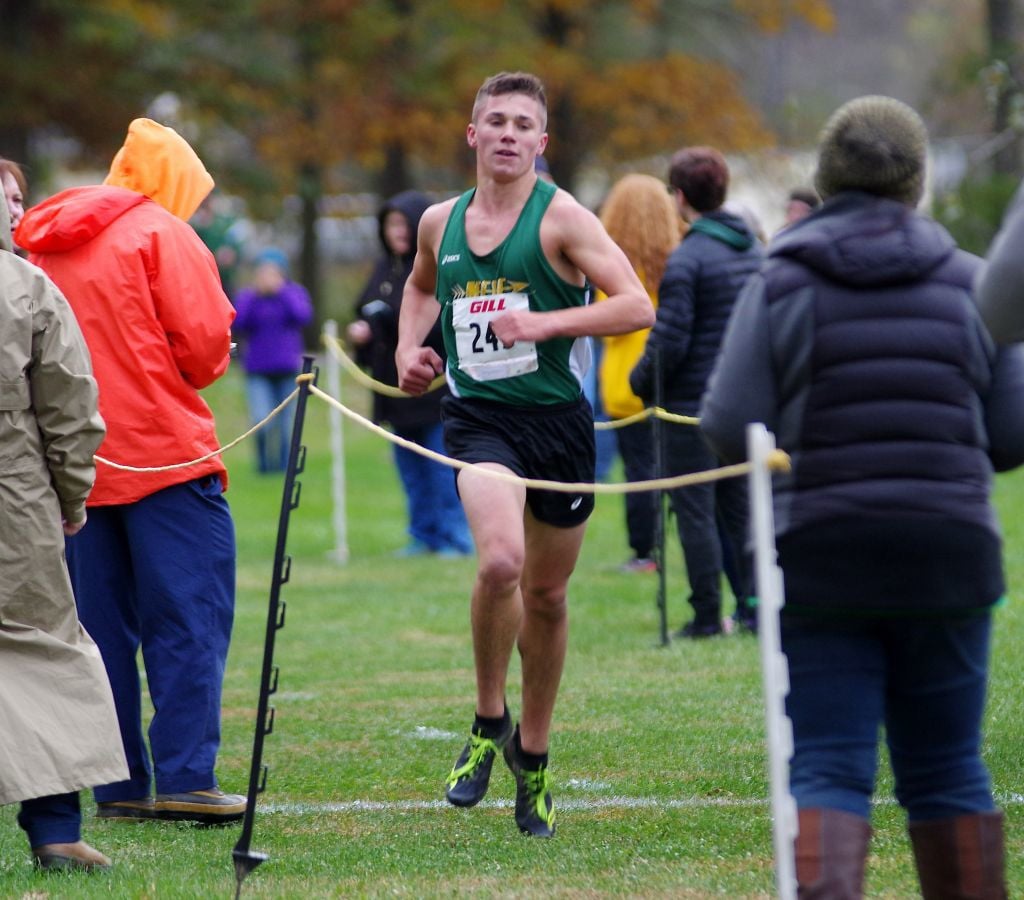 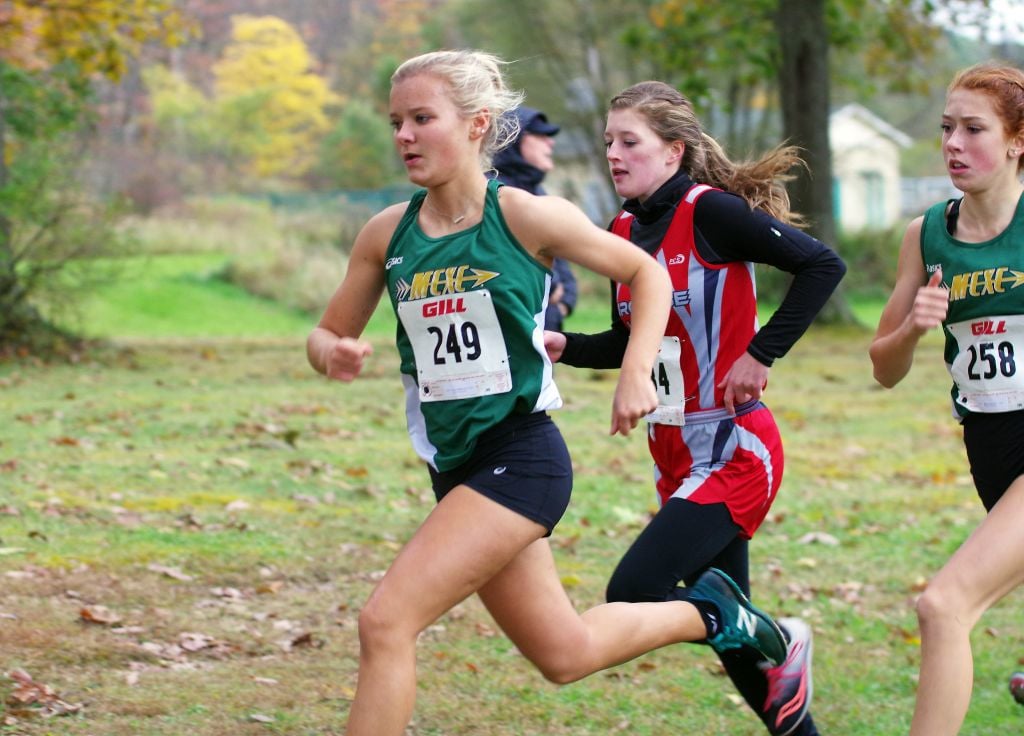 MARION CENTER — Hunter Armstrong couldn’t have scripted it any better.

Running on his home course for the final time, the Marion Center senior had a day he won’t soon forget. Not only did Armstrong win the boys’ individual title for the third straight year at the Heritage Conference Cross Country Championships on Thursday, he broke a pair of records along the way while also leading the Stingers to the team title for the third consecutive season.

Armstrong set the meet and course records at the Marion Center Park Course with a time of 16 minutes, 32.5 seconds, breaking the mark set by another former Marion Center standout, Alex Woodrow, whose record time of 16:38.0 had stood since 2010.

“I really could not have imagined a better day today,” Armstrong said. “I’m glad I beat the record. This was my last chance to beat it.”

“That’s huge,” Marion Center coach Chris Peters said. “Alex Woodrow won three years in a row, and Hunter met Alex when he was in eighth grade and sort of had a little bit of contact here or there, and Hunter has been chasing Woody’s three wins at conference and chasing the meet record. He got that today.”

While Marion Center became the first boys’ team in the 20-year history of the Heritage Conference to win three straight team titles, the Marion Center girls’ team continued its sheer dominance of the meet.

“We did pretty good, came here to do what we wanted to do,” Cornetto said. “For me just being able to win all four Heritage meets my whole career at MCXC, this last home meet makes it so much more special. Being able to win this one last time as a senior just feels really, really nice.”

From the moment the starting gun sounded, Armstrong admittedly had one thing on his mind and one thing only: breaking the record time. He sprinted to the lead at the outset of the 3.1-mile race, and by the time the runners reached the 1-mile mark, it was clear nobody was going to keep up with him.

“I finished the race, and the first thing I said was, ‘Hunter, did you get it?’” teammate Tyler Sacco said. “He said, ‘Yeah,’ and I was like, ‘Holy cow!’ That was crazy. That was his goal. His goal was to beat that time.”

The Stingers’ top five runners all finished in the top 10, and Marion Center won with 26 points. For the second straight season, United finished second.

“This means a lot because, one, it’s my senior year,” Sacco said. “This was my last home meet ever so it’s kind of emotional. Two, we’ve never done this before so it’s a pretty big deal, three in a row. ... And it’s just an accomplishment for me because I’ve never run this fast before so it’s like I actually helped out with it.”

“The boys’ victory is big for us because we’ve been trying to develop the same consistency with the boys’ team as the girls have enjoyed for all these years,” Peters said, “and winning three years in a row, that’s a mark that we set three years ago whenever we saw that we had the tools, the resources to do that, and the boys achieved it, so that’s nice.”

For United’s Cameron, seeing one Marion Center jersey in front of him was enough. He was determined to keep another one from getting ahead of him.

“I was shooting for second and that’s what I got,” Cameron said. “That Sacco kid, he was behind me the whole time, and the only way that I could beat him was just to keep going. To get him off my back, I just had to keep going.”

Much like Armstrong, Cornetto assumed control of the girls’ race early and she didn’t let up. But she didn’t run away with it, either. Freshman teammate Reagen Ryen finished less than 10 seconds behind her, crossing the line in 20:23.4 to take second place.

The Stingers’ Cherise Schultz was third (20:39.3) and Lilly Ryer was fourth (20:57.2) as Marion Center bunched its top five runners among the top six finishers. The lone non-Marion Center runner in the top six was Purchase Line senior Addaleia Beer, who placed fifth (21:07.3). The Stingers won with 16 points.

“For me, personally, this is the first time I’ve placed,” Schultz said, “but it’s really special too for the team. ... We were really tight today. We were tight at (the) county (meet) last week too, but I felt like everybody on the team was just really tight. ... And it was my last race on the course. My coach yelled it out to me, she was like, ‘This is the last race, let’s make it a good one.’ It’s just really special because it’s the last one.”

While Cornetto and Schultz finished their careers 4-for-4 at the conference meet, Ryen got her first taste of winning.

“It’s been our focus all week and we had a good mindset going into it,” Ryen said. “I was nervous but I trusted myself and the results were good.”

The scary thought for the rest of the conference is that there is seemingly no end in sight to the Stingers’ dominance. Only two of their eight runners Thursday were seniors.

“Another thing that stands out for this team is the freshman contribution,” Peters said. “We’re a young team. Everybody sees Alyx Cornetto and Cherise Schultz, seniors, and they’re huge contributors, and we’re going to really miss them next year, but if you look at our team, we have sophomores and freshmen, that’s who’s getting it done.”

One of those freshman is Ryen, who has solidified her spot as the Stingers’ No. 2 runner even though she started running cross country just a year ago. Admittedly, her immediate success has come as a surprise.

Not to her teammates and coaches, though.

“It wasn’t a surprise to any of us just because she works so hard,” Schultz said. “I think once she, her first race, once she found out that she could stay with us, she has stayed with us since.”

“I would not have been surprised if she would have won today,” Peters said. “I’m not surprised with Reagan at all. She’s a heck of a runner. She was very good in junior high, and now that we have that junior high program, I don’t know that she could have done it had she not run junior high.”