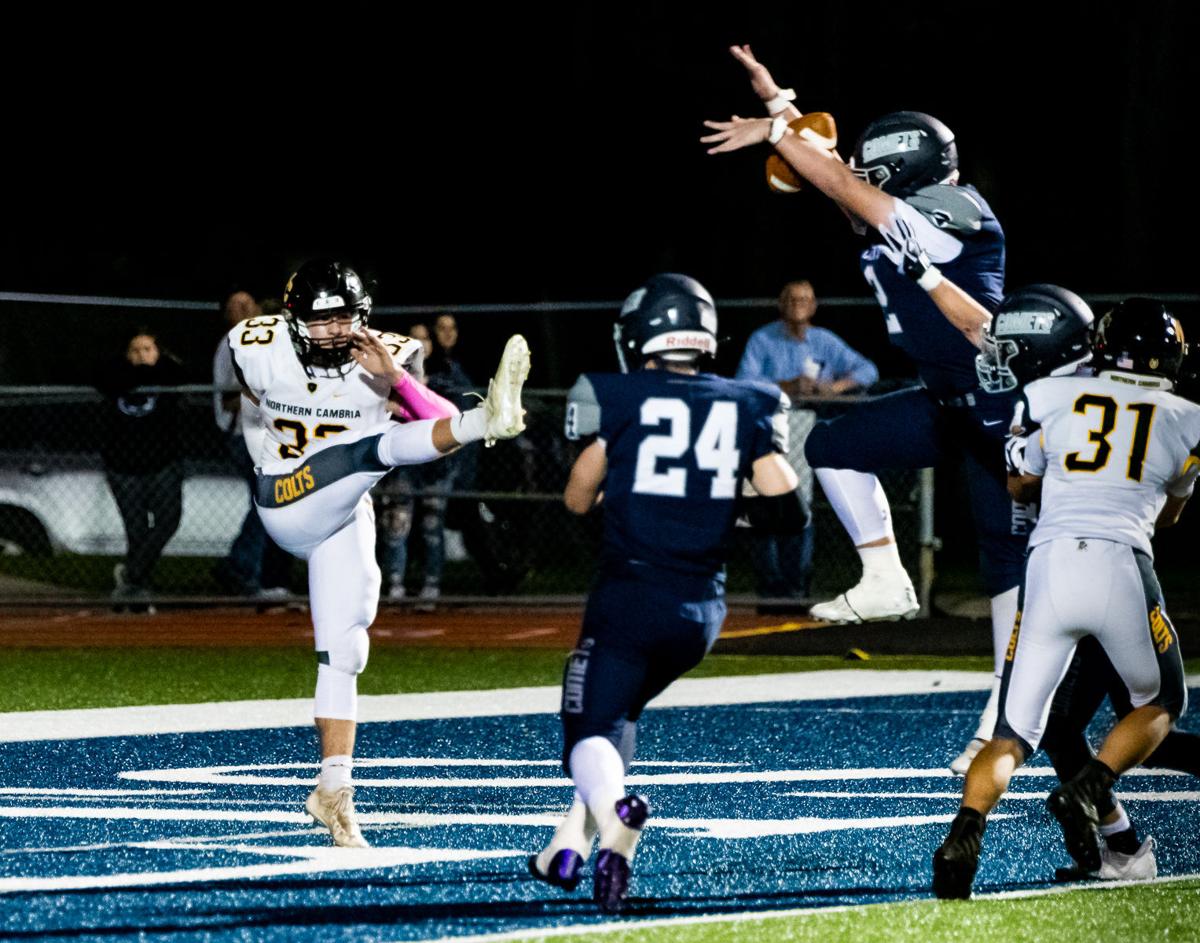 Penns Manor’s Amin Lieb blocked a punt off the foot of Northern Cambria’s Cody Dumm and recovered in the end zone for a touchdown in the Comets' win Friday night. 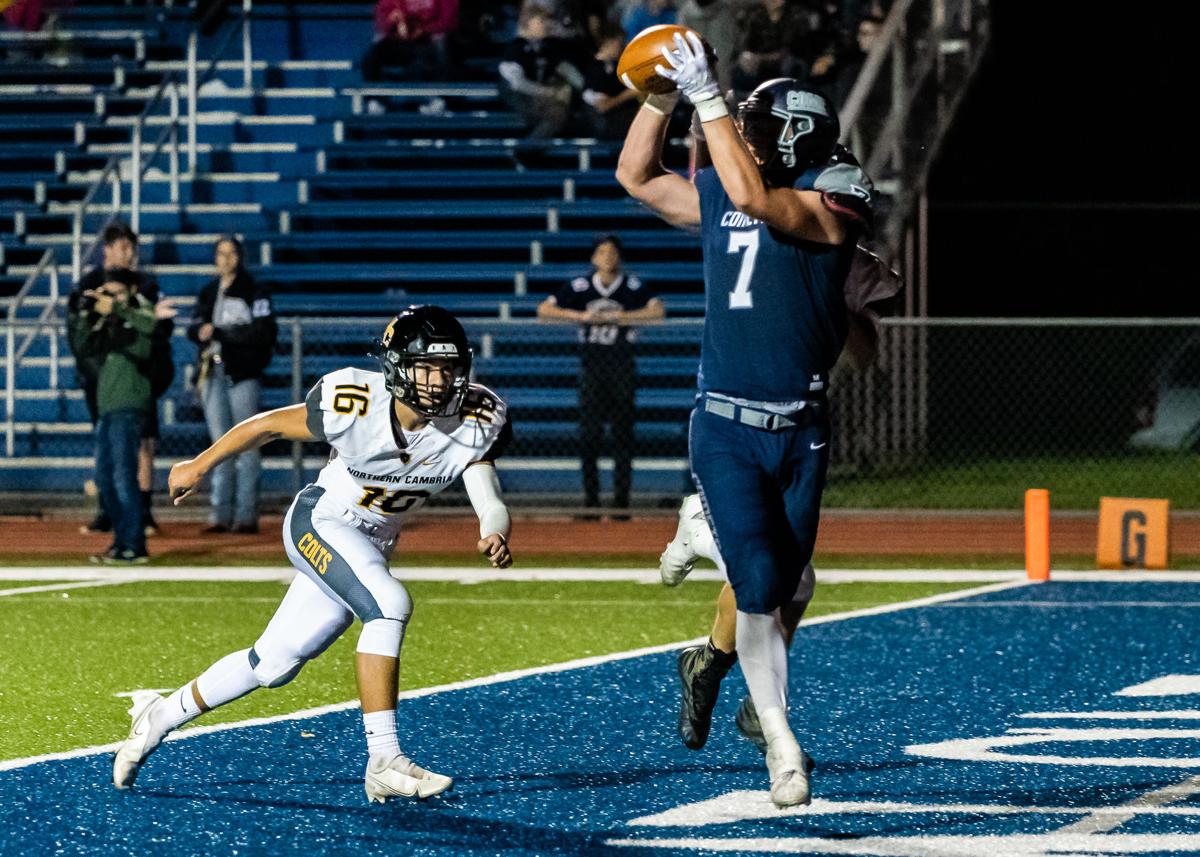 Penns Manor’s Amin Lieb blocked a punt off the foot of Northern Cambria’s Cody Dumm and recovered in the end zone for a touchdown in the Comets' win Friday night.

KENWOOD — In what has been a brutal season for Northern Cambria and Penns Manor, it was ultimately the homestanding Comets who remedied some of the damage done in previous weeks.

With both teams entering the game at 1-6, Penns Manor emerged with a 32-8 win for its first in-conference victory of 2021.

Prior to Friday night, Penns Manor’s only win came in Week 3 against Southern Huntingdon in overtime, and the Comets were outscored 327-102 throughout the season.

Their win came largely as a result of Northern Cambria’s continuous struggles to take advantage of scoring opportunities, which inlcuded three consecutive fumbles in the first half, with two of them occurring inside Penns Manor’s 20-yard line. The turnovers transpired in the aftermath of a punt that was blocked by the Comets and recovered for a touchdown.

“(Mistakes) were what has been usually happening to us,” Comets coach Bill Packer said. “But we worked on blocking the punt all week, and it worked out perfectly for us. Turnovers went our way tonight, and when the turnovers go your way, you usually have a good chance to win.”

The Comets won the coin toss and deferred to Northern Cambria. Both teams exchanged punts, but Justin Marshall’s kick for the Comets backed the Colts at their own 8-yard line. They were forced to punt from their end zone, and the awkward position was more than enough for freshman Amin Lieb to easily block the punt.

He recovered his own block, and the Comets moved to a 7-0 lead.

The mishap on special teams carried over to the Colts’ offense. After gradually moving into Penns Manor’s territory, junior running back Cody Dumm fumbled at the 10-yard line and Carter Smith recovered for the Comets.

Penns Manor punted again, but the Colts’ possession was short-lived. On the opening play, Xander Dolansky fumbled after catching a pass from Owen Bougher. Penns Manor made the recovery at the 34-yard line, only to fumble away its possession.

Led by four carries and 46 yards from Jack Sheredy, the Colts quickly moved downfield and reached goal-to-go territory. On second down, the same ailment that killed their previous drives struck once again. Sheredy fumbled at the 4-yard line, awarding Penns Manor another possession midway through the second quarter.

Penns Manor punted again, but Northern Cambria failed to extend its drive when it faced fourth-and-3. Dolansky was stopped short of the first down to give the Comets possession with 1:40 remaining before halftime.

The Comets immediately faced third-and-10 after quarterback Max Hill threw a pair of incompletions, but Hill ran for an 18-yard gain to keep the possession alive. An 18-yard completion to Marshall following advanced them to the Colts’ 25-yard line. They soon faced fourth-and-5, but also converted on the play with a 7-yard run by Smith.

One play later, and with 24.3 seconds to go, the Comets scored their second touchdown on a pass to Smith for 15 yards. A failed extra point attempt kept their lead at 13-0 entering the third quarter.

Penns Manor’s decision to defer served the Comets handsomely after halftime. Hill added to his team’s lead on a breakaway run for 57 yards, compounding the deficit for Northern Cambria.

Trailing 19-0, Northern Cambria’s situation grew increasingly dire. A penalty pushed the Colts to the 10-yard line on their next drive, and it again presented a prime opportunity for Penns Manor to capitalize on special teams.

Before Cody Dumm could execute his punt, he was greeted by an army of on-rushers from the Comets. He held the ball and tried improvising by running but had no chance of escaping and was tackled in the backfield. It subsequently set up another rushing touchdown for Hill on a 2-yard run.

The Colts and Comets each punted, but Northern Cambria finally scored its first points by squeezing in a touchdown with 0.3 seconds left in the third quarter. Dumm scored on a 5-yard run, and quarterback Ethan Donatelli threw to Jack Sheredy to narrow the lead to 25-8.

Searching for a late-game comeback, Ben Janasko intercepted a pass by Hill in the end zone, returning it to the Colts’ 14-yard line with nine minutes to go. Their effort was thwarted early into the possession once junior cornerback Adam Altemus intercepted Donatelli’s pass at the 37-yard line. After tight-roping along the sideline, he was tackled across the goal line for the touchdown.

“He’s a good kid,” Packer said. “The ball was tipped, and he caught it and made a heck of a run. He had some helpful blocks on the edge, but it was a nice job by Adam.”

The win marks the end of an enervating stint for the Comets, and Packer is hopeful it will provide his team with a new life as the playoffs are quickly approaching.

“I’m proud of the team tonight,” he said, “and I’m especially grateful for our two seniors, Alec Johnson and Ty Fennell, on their Senior Night. We’re going to have to win again next week, but we know that it’s playoff time now.”

Meanwhile, missed opportunities and costly mistakes for the Colts made their loss especially frustrating for coach Sam Shutty.

“I thought we had the upper hand in the beginning, but we couldn’t finish drives,” Shutty said.

“Special teams killed us again, even though we worked on that all week. We knew they were going to be aggressive with that because we were exposed last week. We also didn’t make the adjustments we needed to. It just came down to not a lack of preparation, but just a lack of awareness.”

Next week, Northern Cambria plays host to 6-2 River Valley Panthers, while the Comets visit the winless United Lions in pursuit of their third win of the season.