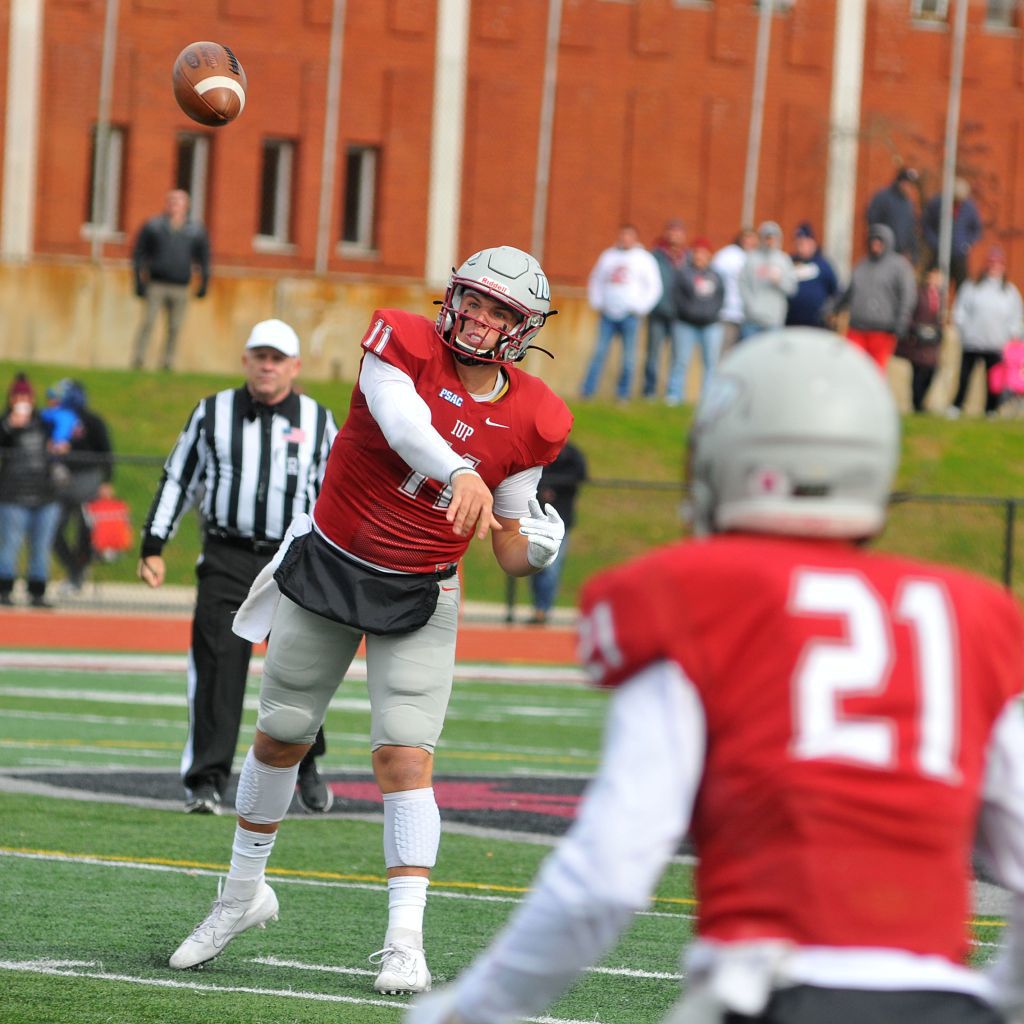 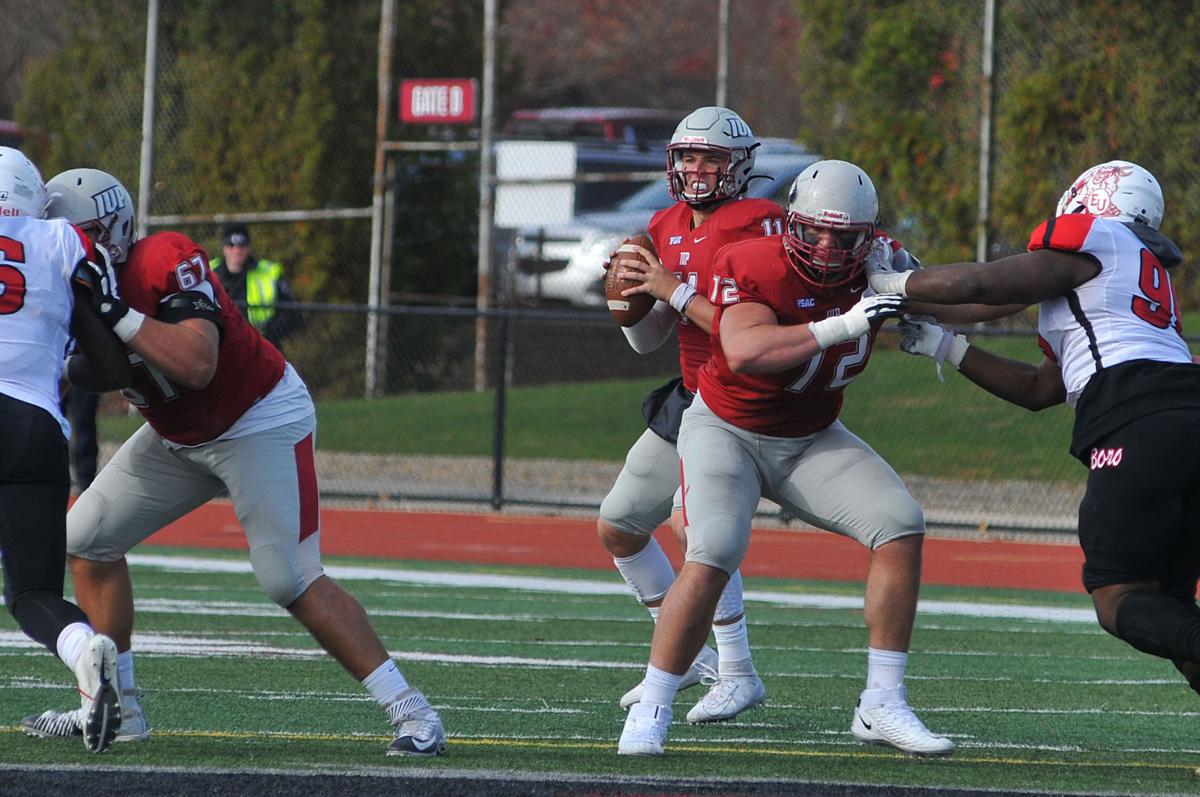 But guess what? It didn’t matter.

Quinton Maxwell threw three touchdown passes, JoJo Gause had his second 100-yard receiving game of the season, and the IUP defense kept Edinboro out of the end zone as the 19th-ranked Crimson Hawks overcame their worst rushing day in more than 30 years as it rolled to a 35-6 win in a PSAC West game at Frank Cignetti Field.

“We’re at a point now in the season where you do what you’ve got to do to win a game,” said IUP coach Paul Tortorella.

IUP (9-1 overall, 6-1 PSAC West) outgained the Fighting Scots (3-7, 3-4) and overcame another sluggish first quarter to beat Edinboro for the sixth straight time and ninth time in the past 10 meetings.

But unlike many of the previous matchups, when IUP oftentimes used its ground game to bludgeon the Fighting Scots, the Crimson Hawks went to the air to win this one. Maxwell completed 18 of 31 attempts for 277 yards and touchdowns to JoJo Gause (4 and 47 yards) and Dom McNeil (7). Duane Brown caught four passes for 98 yards before leaving the game with an ankle injury in the fourth quarter.

“That speaks volumes about the guys we have catching passes,” Maxwell said. “We’ve got guys like Dom and JoJo and Duane out there, and they just make plays. That’s what they do. And, the O-line did a great job protecting me.”

“As long as we do our job up front, you see what we can do on offense,” said Colin McAllister, who made his first start of the season at center, replacing the injured Jeff Arnold. “We’ve got a lot of guys who can make plays, and that’s what they did today.”

Edinboro often put eight men in the box to stop the Crimson Hawks from running the ball. But that left IUP’s receivers single-covered, and that’s a matchup IUP will take any day — even if it means having the fewest rushing yards in a game since at least 1990. The IUP record for fewest rushing yards is minus-28, set against Hillsdale (Mich.) in 1983.

To be fair, the IUP offense did gain some yardage on the ground. Samir Bullock, Malik Anderson, Justice Evans, Jalen Reese and Brown teamed up for 39 yards, but Maxwell was sacked three times for minus-36 yards, and IUP also took a knee three times at the end of the game, losing another 3 yards.

All of that adds up to nothing.

“They would put seven or eight in the box and have another guy back there just waiting for the run,” Tortorella said. “So, you can pound your head against the wall and keep trying (to run) or you can just start throwing the ball downfield, and that’s what we did.”

Maxwell and the passing attack helped IUP overcome a slow start in which it didn’t score in the first quarter and seemed to be lacking any spark against the struggling Scots, who didn’t have the necessary firepower to jump on the Crimson Hawks.

After Edinboro took a 3-0 lead on Vicente Arriagada’s 30-yard field goal, Maxwell connected with McNeil for a touchdown, and then the IUP defense forced a punt. Maxwell hit Brown for a 36-yard gain on first down, and then two plays later Brown dived in on a run from the Wildcat formation to put IUP ahead 14-3.

Edinboro came out of the break with hopes of getting back into the game, but Levi Becker’s first pass of the second half was intercepted by IUP’s Nazir Streater. That set the tone for the second half, as the IUP defense allowed next-to-nothing in the third and fourth quarters.

“Even though we were winning at halftime, it didn’t feel like we were winning,” said Streater, who added a second interception later in the half. “We weren’t doing what we were supposed to be doing. We just needed to keep our foot on the gas and do what we do.”

The Fighting Scots ran 36 plays in the second half, gained just 102 yards and reached the red zone once, where they settled for another Arriagada field goal.

“One thing we did do defensively is keep them out of the end zone,” Tortorella said. “They didn’t run it very well, and we knew that if they couldn’t run it, they would have some issues. We got the lead and made their quarterback throw it. All in all, the body of work is pretty good because they didn’t get into the end zone.”

The win marked the fourth time this season IUP held an opponent without a touchdown. California and Edinboro had two field goals apiece; Millersville and Gannon didn’t score at all.

Linebackers Nick Amendola and Damon Lloyd led the IUP defense with 10 tackles apiece. Streater had nine, in addition to his two picks and three pass breakups, and Harrison Dreher had an interception. Dondrea Tillman had two tackles for loss, including his team’s only sack.

Other than the lack of rushing yardage, which really didn’t mean anything, the only other negative for the Crimson Hawks was a familiar issue. IUP was penalized 10 times for 105 yards, with three of those resulting in Edinboro first downs.

It was the fifth time in the past six games that IUP was called for 10 or more penalties.

The good news is that the yellow flags had little to do with the outcome. IUP won the game going away, and the Crimson Hawks are one step closer to the playoffs.

“We started out slow and didn’t really do much in the last 10 minutes,” Tortorella said, “so if you score 35 points in about two-and-a-half quarters, you should win, and we did.”