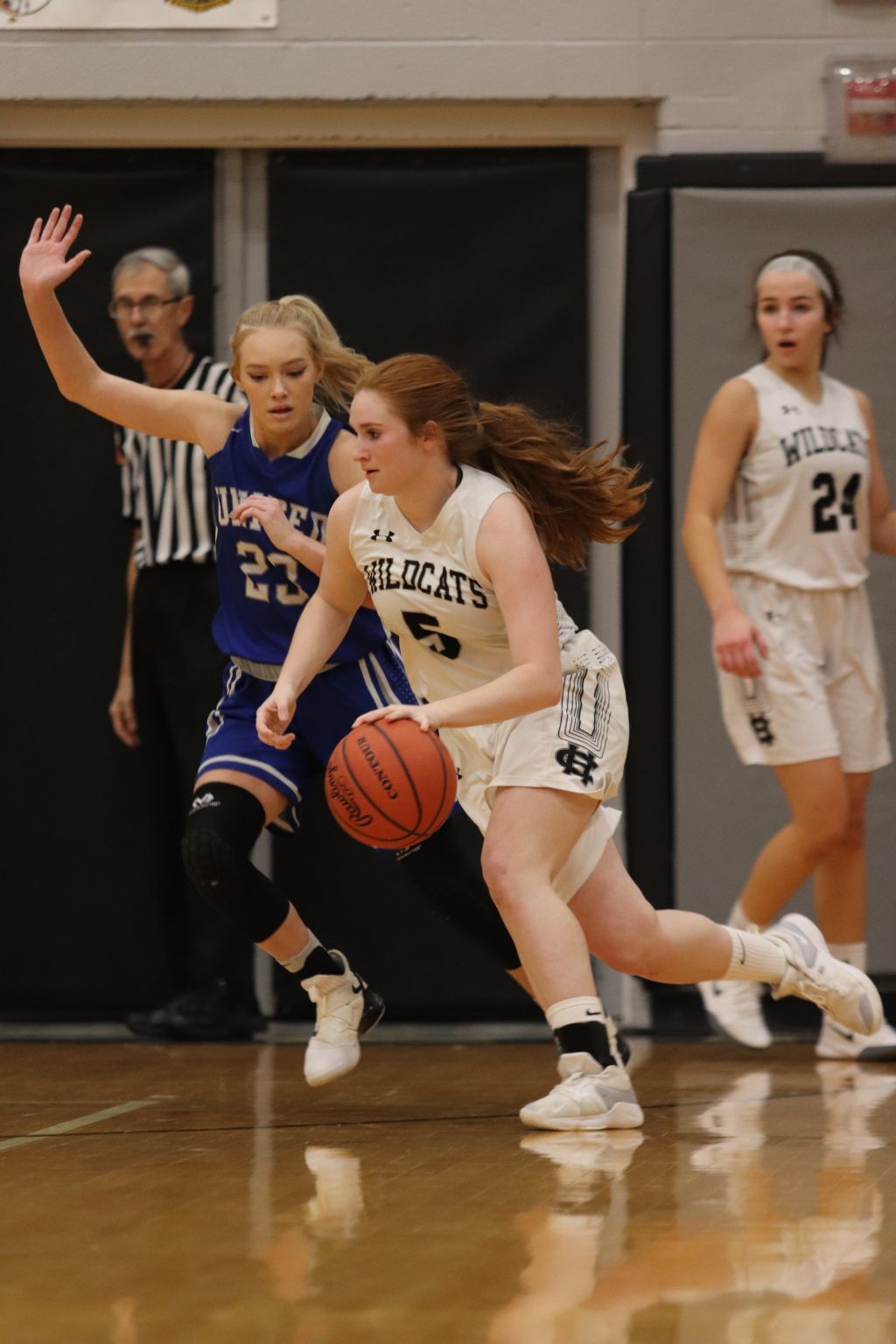 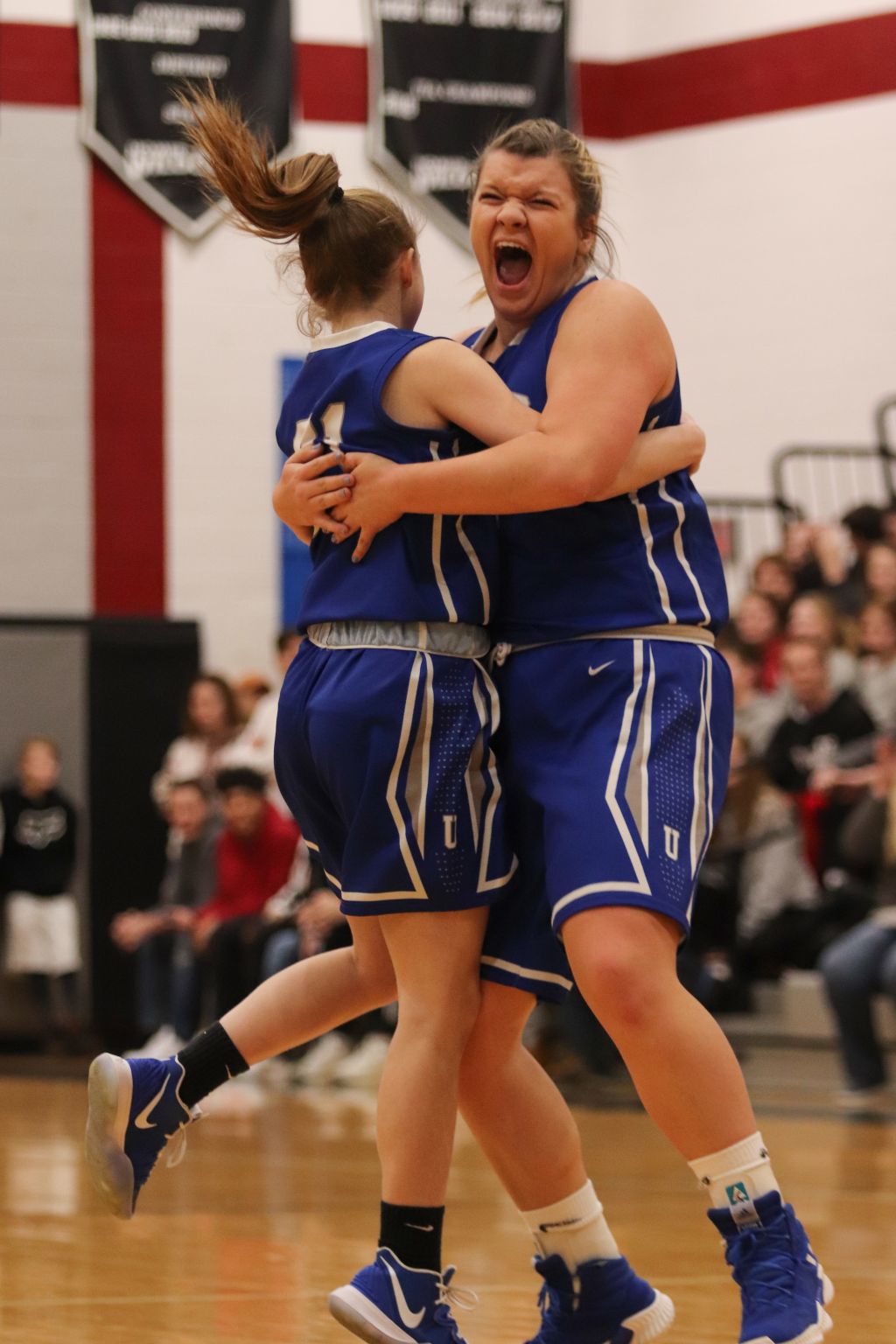 The Homer-Center Wildcats had a rotten week last week.

The Wildcats started the week by losing to Penns Manor by 45 points in a matchup everyone around the Heritage Conference expected to be a close game.

Then the Wildcats went out and got upset by Marion Center, 59-53.

This week started a whole lot better for Homer-Center.

The Wildcats pulled off their own upset, knocking off United, 48-46 at the HomerDome, and handing the Lions their first loss in conference play. Marlee Kochman, a sophomore guard, made two free throws with 1.4 seconds left to break a tie and provide the margin of victory.

“It’s a huge win,” Homer-Center coach Tom Lasher said. “It’s a great win for the girls. Basically they played probably one of their most mistake-free games of the season. I’m sure they wanted to prove they’re better than what they showed last week.”

Homer-Center, a 62-50 loser to United on Dec. 17, made a defensive switch to fuel this win. The Wildcats played a mixture of zones and very little man-to-man the Lions tore up in the first meeting. The idea was to hold down United junior standout forward Maizee Fry. Fry finished with 14 points and topped 1,000 for her career.

“We did something we haven’t done,” Lasher said. “We played almost the entire game in zone, so that had something to do with it. We were able to front her on the low blocks, and when she went up to the high block, we always had somebody right there with her. But she’s a good player and she still got her points, but we slowed her down a little bit.”

“We were ready for the zone,” United coach Paul Hall said. Ready for zone. “That’s what most people are going to do now. You’ve got to give Homer-Center credit. We knew they were a good team. Every game is going to be tough.”

Fry needed four points to reach 1,000 as a junior. She reached it with 33 seconds remaining in the first quarter.

“We come down there to Homer and it’s standing-room-only and probably three-quarters of the crowd is ours,” Hall said, “so it’s great to see all the fans that keep up with United basketball and her accomplishments she’s had. But that’s over with now and we’ve got to starting moving forward and get ready for our next game.”

United led 15-11 after first quarter, and after an even second quarter, the Lions held a 28-24 lead going into halftime.

Homer-Center forged a tie going into the fourth quarter, stopped United on its chance to take the lead inside the last minute. During a timeout with four seconds left, Homer-Center drew up a play for Kochman, and the sophomore drove to the bucket and drew a foul on Fry.

“We just got baskets at key times,” Lasher said. “They’d get a basket, we’d respond.”

Kochman scored a game-high 19 points. She was 6-for-6 from the line and the Wildcats were 7-for-7. Molly Kosmack and Kennidy Page scored 10 points apiece. Page hit a pair of 3s and had four rebounds and two blocked shots, and Kosmack grabbed seven rebounds. Vada Walbeck also had seven boards.

“Kochman had a really nice game,” Hall said. “She made those last two with the pressure on, and she was clutch.”

“Duplin getting in foul trouble at the beginning hurt,” Hall said, “but you’ve got to give Homer-Center all the credit. They capitalized on a lot of my defensive mistakes. And they had the ball last, and the officials called a foul on the last shot. It’s a hard way to end the game.”

Homer-Center improved to 11-4 overall and 8-2 in the conference and moved closer to clinching a conference playoff berth. The Wildcats play host to North Star in a non-conference game Wednesday.

United still maintains a strong hold ahead of Homer-Center in the Heritage North. The Lions are 14-3 overall and hold first place in the division at 9-1 going into Wednesday’s home game against Saltsburg.

“Mathematically we’re still alive,” Lasher said, “but United is a good team and I don’t think they’re going to lose very many games going down the stretch.”

PURCHASE LINE 53, MARION CENTER 43: Purchase Line held Marion Center to 11 points in the first half and withstood the Stingers’ comeback in a Heritage Conference game at home.

Purchase Line led by 18 points, 29-11, at halftime. Marion Center outscored the Red Dragons in the second half 32-24.

Laney Monroe led Marion Center with 24 points. She went 10-for-12 at the free throw line.

“She’s so athletic and does so many things well,” West Shamokin coach Frank Nagy said of the 5-foot-6 junior guard. “As the season is going on she’s really coming into her own. She’s definitely somebody I had high expectations for, and it’s nice to see her coming into her own and not just me expecting it, but it coming to fruition for her right now.”

“I felt we claim out flat, but credit to Northern Cambria. They worked their tails off,” Nagy said. “They were ready to go and their effort was really. Defensively we were a step slow, and I wasn’t really happy with the first half, but in the third quarter we picked it up to where we needed to be.”

West Shamokin (10-6, 7-3) plays host to Purchase Line and can secure a conference playoff berth with a win.

Northern Cambria (0-13, 0-8) plays host to Harmony in a non-conference game on Thursday.

KNOCH 63, INDIANA 42: A poor second quarter did in Indiana in a loss to Knoch in a WPIAL Class 4A Section 1 game.

Indiana trailed by two points, 19-17, going into the second quarter and then scored only two more points before halftime and trailed by 18, 37-19. The Indians couldn’t recover in the second half while playing Knoch close to even.

“They couldn’t miss (in the second quarter) and we couldn’t get anything to go down,” Indiana assistant coach Otto Peterson said.

Indiana (10-7, 4-5) plays at Apollo-Ridge on Thursday. Both teams are tied for fourth in the section.

WEST SHAMOKIN 73, KARNS CITY 47: West Shamokin stretched a 10-point lead out of reach in the second half while outscoring Karns City 45-29 in a non-conference game.