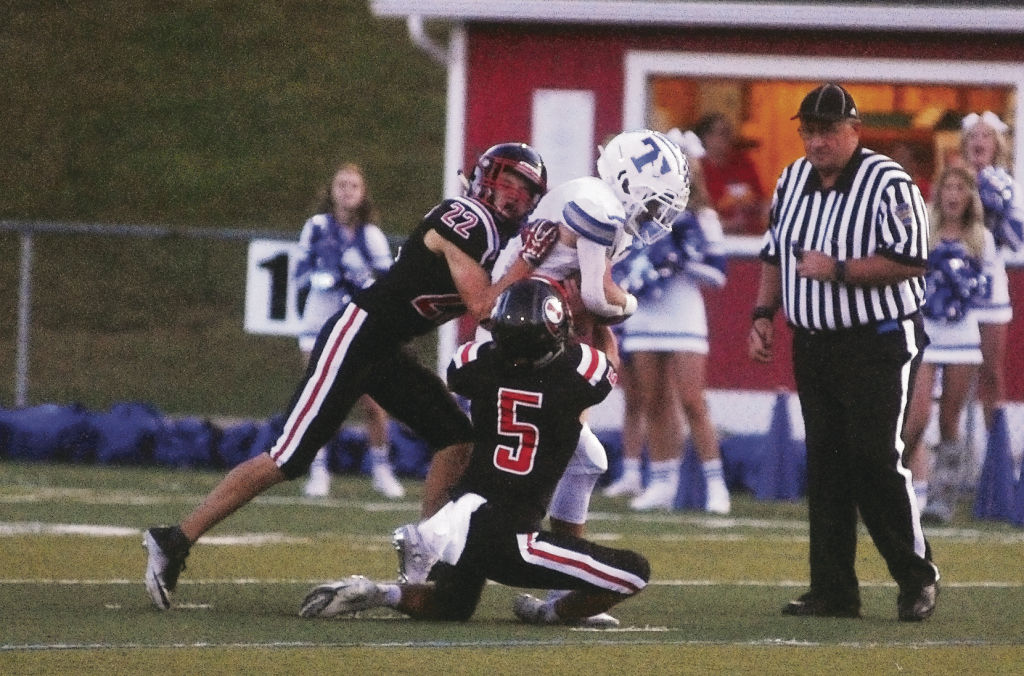 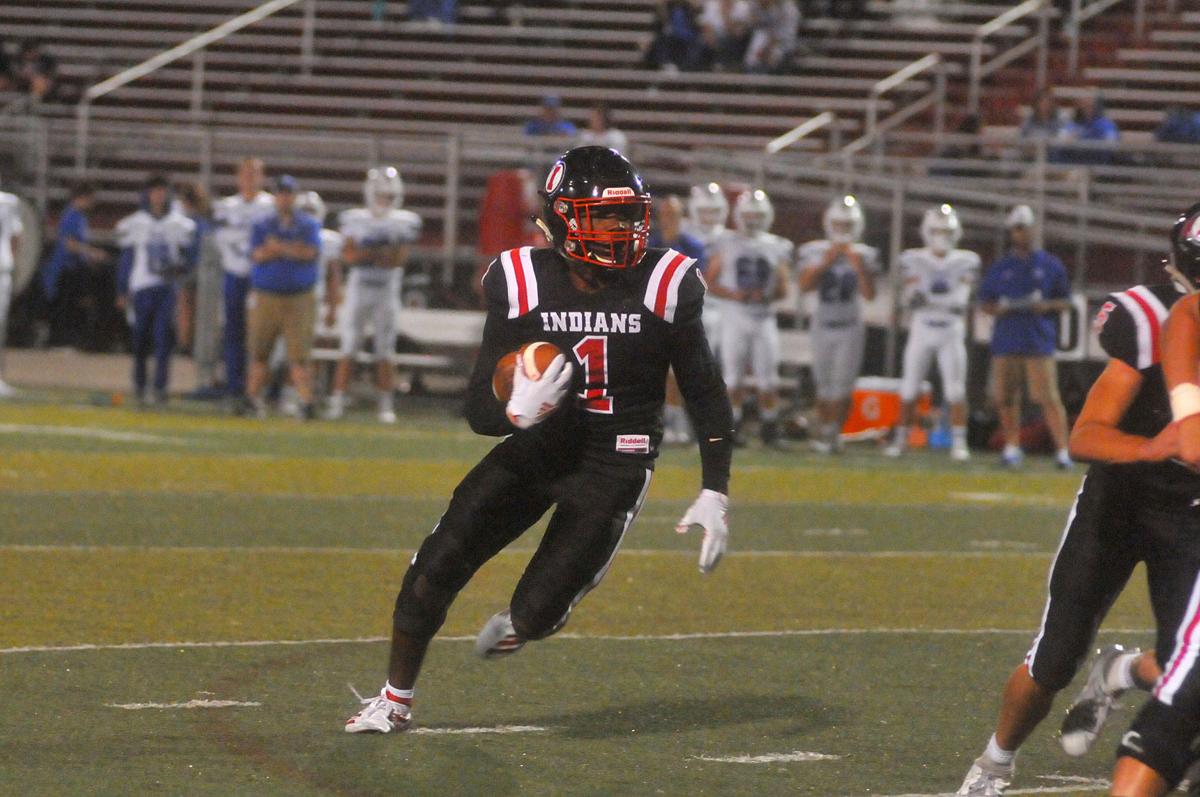 Indiana exited the locker room after halftime seeking a sense of d￩j￠ vu.

The Indians weren’t careful with what they wished for when they kicked back to Trinity on Friday night.

So rather than triumph for their second comeback victory over the Hillers in as many years, Indiana was eventually greeted with just more of the same — costly turnovers, defensive lapses and a scoreboard that was quickly shut off to erase a lopsided final score.

The Indians claimed their only lead on sophomore running back Devin Flint’s 57-yard touchdown run on the opening play of the second half. But in the span of just over two minutes midway through the third quarter, Trinity used a pair of Indiana mistakes to pull away in a 35-15 victory in a WPIAL Class 4A Big Eight Conference football game at Andy Kuzneski Field.

For a brief moment after taking a 15-14 edge, Indiana seemed poised to recapture the second-half spark that spoiled Trinity’s homecoming with a 27-21 overtime win one year ago today. It all rolled downhill from there as the Hillers scored a touchdown on a fake-punt run on their next possession and capitalized on an Indians fumble for another score that put Trinity ahead 29-15.

“We came out and a lot of us had the same vision as last year,” senior linebacker Justin Raible said. “Last year at Trinity we were down 21-6 at halftime and we came back in OT and beat them. So everyone was all hyped up. We were only down five. We just went out there and the first play we scored, which was a big momentum shift.

“Our defense fell apart a little bit. It wasn’t as physical as the first half. Trinity is a fairly physical team, so I have to hand it to them for doing that, but in the second half, we just didn’t match their physicality.”

Indiana (1-5, 1-4 conference) and Trinity (2-3, 2-3) both entered needing a win to remain afloat in the conference, with each team’s lone victory prior to Friday coming against winless section foe Ringgold.

Now, the Indians, who are just beginning to regain health following a rash of early-season injuries, will need plenty of help in the standings with a pair of unfavorable non-conference games next on the schedule.

Indiana will travel to Class 5A McKeesport (4-2) next Saturday afternoon then welcome former Class 4A Northwest 9 conference foe Blackhawk (3-3) before wrapping up the regular season with a pair of conference games.

Of course, a top-four finish and the program’s first playoff berth since 2014 appear to be distant aspirations for a youth-laden program struggling to simply keep a grasp on the present — Indiana lost two of its seven fumbles Friday night, stretching its total to 16 lost fumbles through six games.

After being outscored by a total of 123-7 by the top two teams in the conference, Thomas Jefferson and Belle Vernon, respectively, Indiana finally captured some momentum for the first time since a 28-13 win over Ringgold on Sept. 6.

Senior kicker Luke Ciocca drilled a 27-yard field goal with three seconds remaining in the first half that cut Trinity’s lead to five, 14-9. The play was set up by a 64-yard Flint run on third-and-16, which was only allowed when the Hillers called timeout prior in an attempt to regain possession.

Nineteen seconds after the break, Flint surpassed the century mark for the first time, rushing for his first career varsity touchdown, although Indiana missed on the two-point conversion attempt.

Flint accounted for 159 of Indiana’s 186 rushing yards on only 10 carries in just his third appearance this season after not being available to the team in the first three weeks.

Fellow sophomore Zach Herrington chipped in 32 yards on three attempts, including Indiana’s first touchdown from 5 yards that tied the game at 7-all in the second quarter, giving the Indians a glimpse of what could be a budding running group.

“I’m happy to be back,” Flint said. “It felt great, honestly. Us sophomores, we have two more years to grow. We have to use the offseason better. We have to go the weight room every single day and hopefully we can go somewhere some day.”

Of course, it all quickly unraveled following the go-ahead score.

Trinity top playmaker Michah Finley lined up to punt on fourth-and-13 when Indiana appeared to force the Hillers off the field on their first drive after the break. The 5-foot-7 junior then charged right up the middle for a 40-yard score that regained the lead, 22-15.

Three plays later, Indiana fumbled away possession when sophomore quarterback Fox Van Leer’s pitch was dropped in the backfield. And just over a minute later, a close game became a two-score deficit.

Trinity pulled out all the tricks — double reverses, flea flickers, multiple fourth-down conversions — but it wasn’t anything the Indians hadn’t seen before. It was just a lack of implementation.

“It’s all about the execution,” Raible said. “All of the starters are watching film all day and all night. We’re seeing every type of formation and different plays.”

And following a three-and-out on its next possession, Indiana did force the Hillers to punt with the help of two unsportsmanlike conduct infractions. Only this time, a running-into-the-kicker penalty on fourth-and-33 awarded Trinity a first down.

“Mainly, we’re just making dumb mistakes,” Overdorff said. “It’s fourth-and-13 and they fake a punt for a touchdown. That’s something we practiced all week because we knew it was coming — they have like five different punt formations — and we just ran right by him, both our linebackers. That hurt. Then, again, we turn the ball over too many times on offense. And we still have a chance, we have them on fourth-and-30-something, and we run into the punter.”

Finley was the catalyst for Trinity throughout, rushing for 254 yards and a trio of touchdowns on 35 carries.

Decimated by injuries in the early portion of the season, Indiana returned a trio of senior starters in two-way lineman Ty Olliver, running back and linebacker Malik Turner and Raible. However, Turner exited at halftime and did not return.

Indiana came out of Friday’s game with more positives than it has had in a while. Unfortunately, the result felt all too familiar for a team that has been rich in youth, but not much else.

“I feel bad for them because they need a payoff, and it’s just tough with our schedule and where we’re at in the program to get that positive step. It’s tough. We have to keep grinding. I just feel bad for them.”