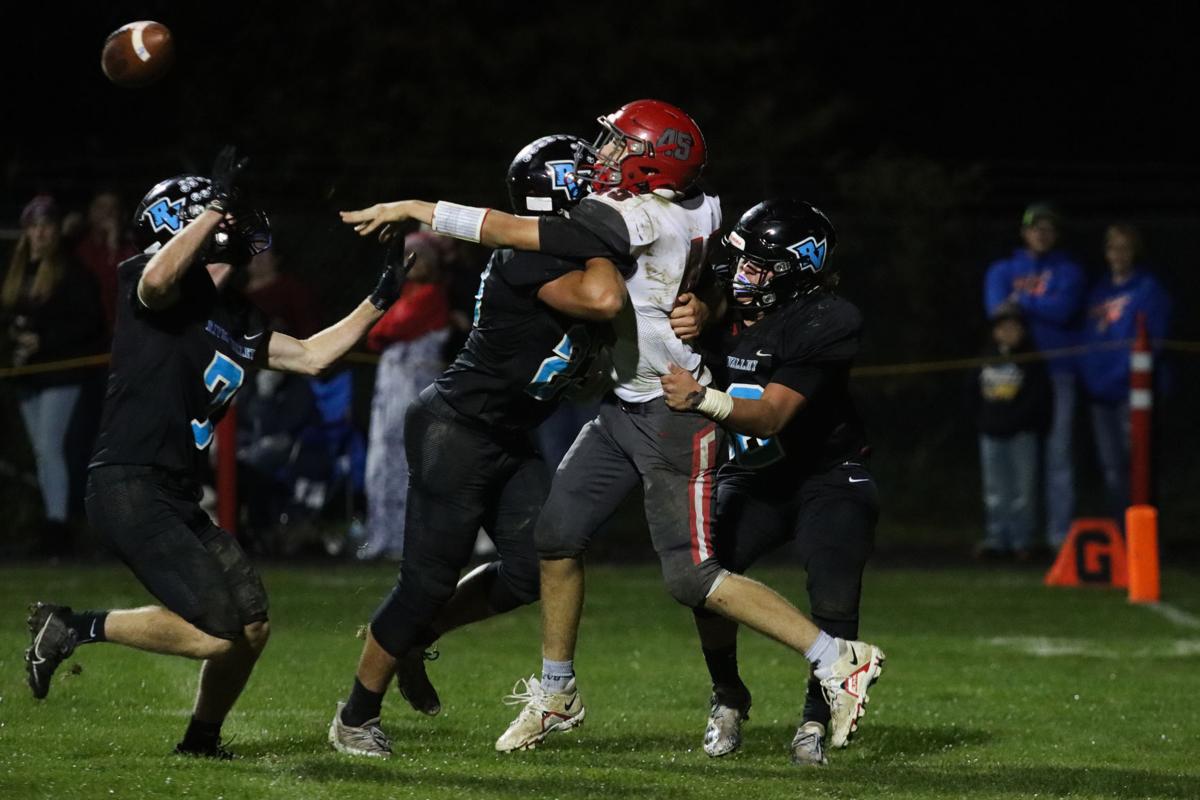 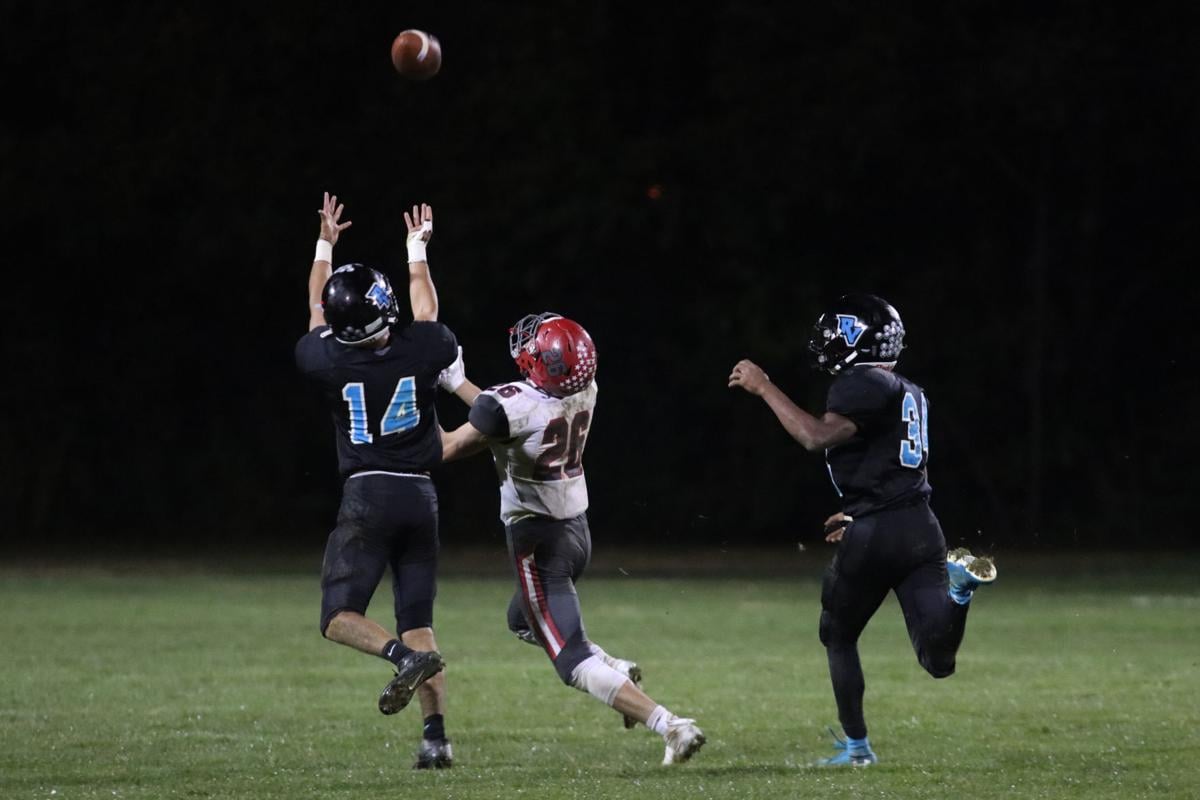 BLAIRSVILLE — Halloween came a few weeks early as River Valley, led by the Bartolini cousins, put up a performance that is sure to give the Purchase Line Red Dragons nightmares in the Panthers’ 43-18 victory on Friday.

River Valley seniors Angelo and Rocco Bartolini were breathing down the neck of Purchase Line quarterback John Elick the entire night. The cousins took down Elick in the backfield three times, blocked two of his passes and broke up two more.

The cousins also led the Panthers’ offense. Angelo, a running back, put up 102 rushing yards and two touchdowns on 17 carries, bringing him to 938 yards on the season. Rocco, a wide receiver, grabbed three passes off QB Braden Staats for a team-leading 106 receiving yards and a touchdown while running for an extra 26.

“We knew right off the bat that it was going to be a tough match,” said River Valley coach Jess Houser. “It was anybody’s game in the first half, but we came out in the second half and got the kids fired up. That’s when we started to pour it on.”

The first play of the game was an impressive 60-yard pass downfield from Staats to Rocco Bartolini for a score to give River Valley a 7-0 lead.

Houser was worried heading into Friday on how his offense would stack up against a Purchase Line defense that previously held its opponents to just 11 points per game and 3.7 yards per play. Turns out, he didn’t have much to worry about.

The Dragons showed life in the first half. Purchase Line matched River Valley’s touchdown with a score of its own on its first drive of the game. A 14-play, 77-yard drive that ended with Elick in the end zone and the Dragons within one point.

Purchase Line turned the tide when Angelo Bartolini’s second-quarter fumble was snagged up by Brock Lloyd and taken 9 yards to put the Dragons up 12-7.

Momentum shifted once again when Staats led a quick six-play drive that finished with a 21-yard pass to senior Hank Skirboll, an extra-point kick by Keith Behanna and a score of 14-12.

Purchase Line kept the pressure on and forced River Valley to start handing off the ball to more than just its top rusher and start stepping up the passing game to throw the Dragons off its scent.

River Valley kept rolling, forcing a fumble off a pass to Dragons sophomore Jaylin Robertson to end the first half.

Purchase Line ran out of steam to keep up. The Dragons defense that held the Panthers to just 45 rushing yards in the first half, allowed 142 in the second.

Senior running back Sincere McFarlin led a scoring drive that saw him run 50 total yards on three carries to extend the Panthers’ lead to 21-12. McFarlin ended the night with 59 rushing yards on six carries.

Angelo Bartolini followed with two consecutive touchdowns. The first a 12-yard rush and the second a 35-yard trek through defenders. The two-touchdown night is actually his lowest-scoring game of the season and the longest he’s been held out of the end zone.

“They were following me everywhere I was going, so my team picked me up,” he said of Bartolini being held to just 25 yards in the first half. “I couldn’t run. They were stopping me, so my team picked up and kept going. They didn’t know who the ball was going to, and it allowed for me to get a couple yards. It was a great team win. I couldn’t care less about the touchdowns. It just proves we can beat any team if we have the right mindset.”

River Valley sophomore defensive tackle Jake McKnight grabbed a bad snap fumble in the end zone to give the Panthers their final total of 43.

Purchase Line senior running back Mello Sanchez returned a kickoff 85 yards with less than two minutes on the clock to edge the score to 43-18, but it was simply too late to rally back.

“Our defense played great tonight,” Houser said. “All we heard all week was that Purchase Line has the best defense, but we wanted to prove that we had the best defense in the conference. We came out today and showed that.”

The River Valley defense held Purchase Line to just 136 total offensive yards. Elick never had room to breathe, completing just 6 of his 17 pass attempts for 85 yards, and spent the majority of his night on his back staring up at the Bartolini boys.

Friday night was a test for undefeated River Valley and a Purchase Line team gaining momentum after two big wins. Prior to facing each other, the Red Dragons and Panthers hadn’t played a team with a winning record and their opponents were a collective 10-34.

The victory gives River Valley confidence that it is as good of a football team as its record shows and that Purchase Line has work to do, which, according to coach Matt Falisec, is simply getting his players healthy and on the field.

Both teams head into a tough streak of games in their schedules, which each includes Cambria Heights and Homer-Center.