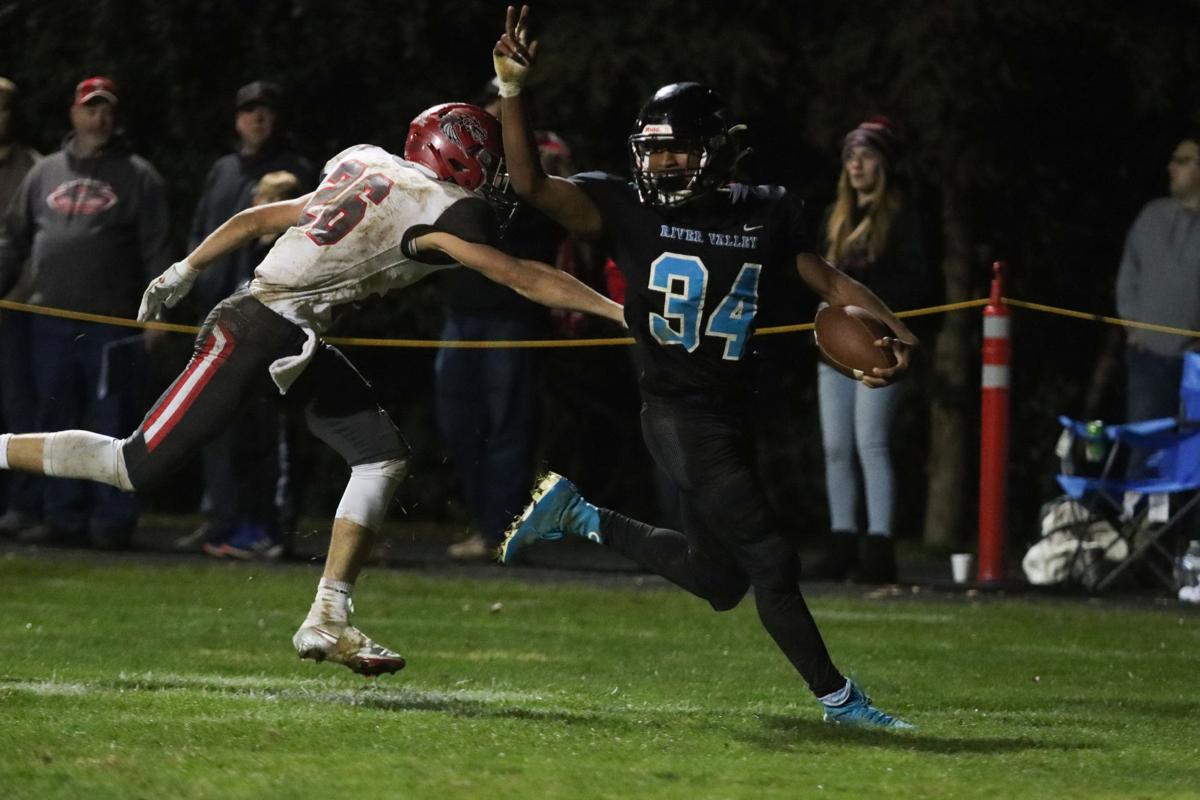 RIVER VALLEY’S Sincere McFarlin figures to see more action out of the backfield with Angelo Bartolini, the area’s leading rusher, out of action this week.

RIVER VALLEY’S Sincere McFarlin figures to see more action out of the backfield with Angelo Bartolini, the area’s leading rusher, out of action this week.

River Valley passed an important test when it broke through Purchase Line’s tough defense to secure a 43-18 victory and remain undefeated last week.

The Panthers (6-0) face a new test as they find themselves without standout running back Angelo Bartolini for Friday’s game at Homer-Center (5-1), which is hungry to prove its five-game win streak isn’t just the result of a lucky schedule when these two Heritage Conference powerhouses collide.

River Valley and Homer-Center rely heavily on their run games, with the Wildcats holding the top rushing offense in the Heritage with an average of 304.2 yards a game. The Panthers, despite only playing five games due to a Week 2 forfeit from West Shamokin, hold the No. 2 spot, averaging 274.4 yards a game.

“They’ve put it all together,” said River Valley coach Jess Houser. “They’ve been running and passing the ball. We’re going to have to play the defense we play by getting after the quarterback and try to create turnovers. We have to protect the ball up front at the line of scrimmage, our offensive line is going to have to get off the ball and get a good push and our defensive line has to put good pressure on their quarterback.”

River Valley will have to find a way to win despite losing its most dynamic offensive threat. Bartolini is sidelined due to an “infection in his leg from the carpet burn he got at Penns Manor (two weeks ago),” according to Houser.

Bartolini is sitting on 939 rushing yards and 18 touchdowns, averaging 10.3 yards a carry and 187.8 per game. He’s the conference’s leading rusher and scorer (110) and also contributes heavily on defense.

“He’s had a tremendous year,” said Homer-Center coach Greg Page. “He’s just a good football player. It’s disappointing, honestly, because you want him to play — you don’t want to see him miss games; it’s his senior year — and you want to play teams when they’re at their best.”

“With Sincere, we can get him going. We haven’t fully let him go all year,” Houser said. “We’ll move Rocco to fullback. We also have Isaac Witmer. He’ll play a bit of fullback, too. We just plan on doing what we do and get the guys going.”

McFarlin is River Valley’s second-leading rusher with 238 yards and four touchdowns on 26 carries. He averages 9.2 yards per carry and 47.6 per game. Witmer averages 15.7 yards on his three catches this season, while Rocco Bartolini averages 29.8 receiving yards on four opportunities in three games. Rocco had a breakout game against the Red Dragons with 106 yards receiving, 26 rushing and a touchdown.

The Wildcats will rely on 5-foot-11 running back Collin Troup, who is the league’s second-leading rusher (827) and scorer (74) after Bartolini. Troup, a senior, has 11 touchdowns and averages 6.6 yards per carry and 137.8 per game. Landon Hill, a 6-1 sophomore, is another playmaker for Homer-Center, averaging 6.7 yards on 69 carries.

Homer-Center may also have an edge on River Valley when it comes to passing. Wildcats quarterback Cole McAnulty has connected on 27 of 71 pass attempts for 555 yards with three three interceptions and five touchdowns. He averages 123.1 yards per game and 20.6 per completion.

His top target is Anthony Rowland, a 5-10 senior wide receiver who is averaging 18.6 yards per catch and has scored two touchdowns.

“We’ll have to win it on the defensive line and control their passing,” Houser said. “They like the deep ball, so we have to shut down their receivers and get pressure on their quarterback.”

Meanwhile, River Valley quarterback Braden Staats, a 6-1 senior, leads the Heritage in passer rating (254.3) with a relatively small sample size. Staats is 19-for-28 for 449 yards with one interception and five touchdowns.

The Panthers haven’t had to rely on their passing game because Bartolini has been so effective on the ground; however, they’ll be forced to utilize Staats more frequently to make up for Angelo Bartolini’s absence.

River Valley and Homer-Center’s powerful offenses will each need to break through equally tough defenses.

River Valley has held opponents to just 16.6 points per game, outscoring challengers 224-83. It also holds the best turnover margin in the Heritage at plus-8.

Since losing to conference-leading Cambria Heights on opening weekend, Homer-Center hasn’t faced a team with a winning record. Outside of the unbeaten Highlanders, the Wildcats opponents are a collective 7-23.

The Panthers were in a nearly identical situation heading into their clash with the Red Dragons. River Valley proved itself by expanding its offense outside of Angelo Bartolini, who was held to just 102 rushing yards and a touchdown on the night, and outshining a Purchase Line defense that previously held opponents to just an average of 11 points per game and 3.7 yards per play.

Homer-Center is eager to test itslef in a similar fashion, and it will come against a team that’s a reflection of its own.

“It’s a tremendous test for us,” Page said. “There’s a reason they’re undefeated. Their coaching staff since the summer time has done a whale of a job at getting that team to mesh and getting them on the same page. … Their kids are playing aggressive in all phases of the game, and that’s a reflection of the kids and the coaching staff.”

Page isn’t allowing the absence of Angelo Bartolini to affect his team’s strategy. Instead he’s preparing his team to continue the hard-fought football that has earned it five straight victories.

“I hope they come out with the same energy and determination they have all six weeks that we’ve played,” Page said. “Even the first week we lost, we played physical. We played some good football teams through the first six weeks, and we’ve gotten contributions from a lot of different guys. Our lineman upfront have been working very hard. We hope to continue that. It’s a matter of building what you’ve done and not getting complacent and wanting to take the next step.”

As for the Panthers, they’re accepting the challenge of proving that one player does not determine whether they remain undefeated. Houser’s strategy to accomplish that massive task is simple: “We’re just going to do what we do,” he said.