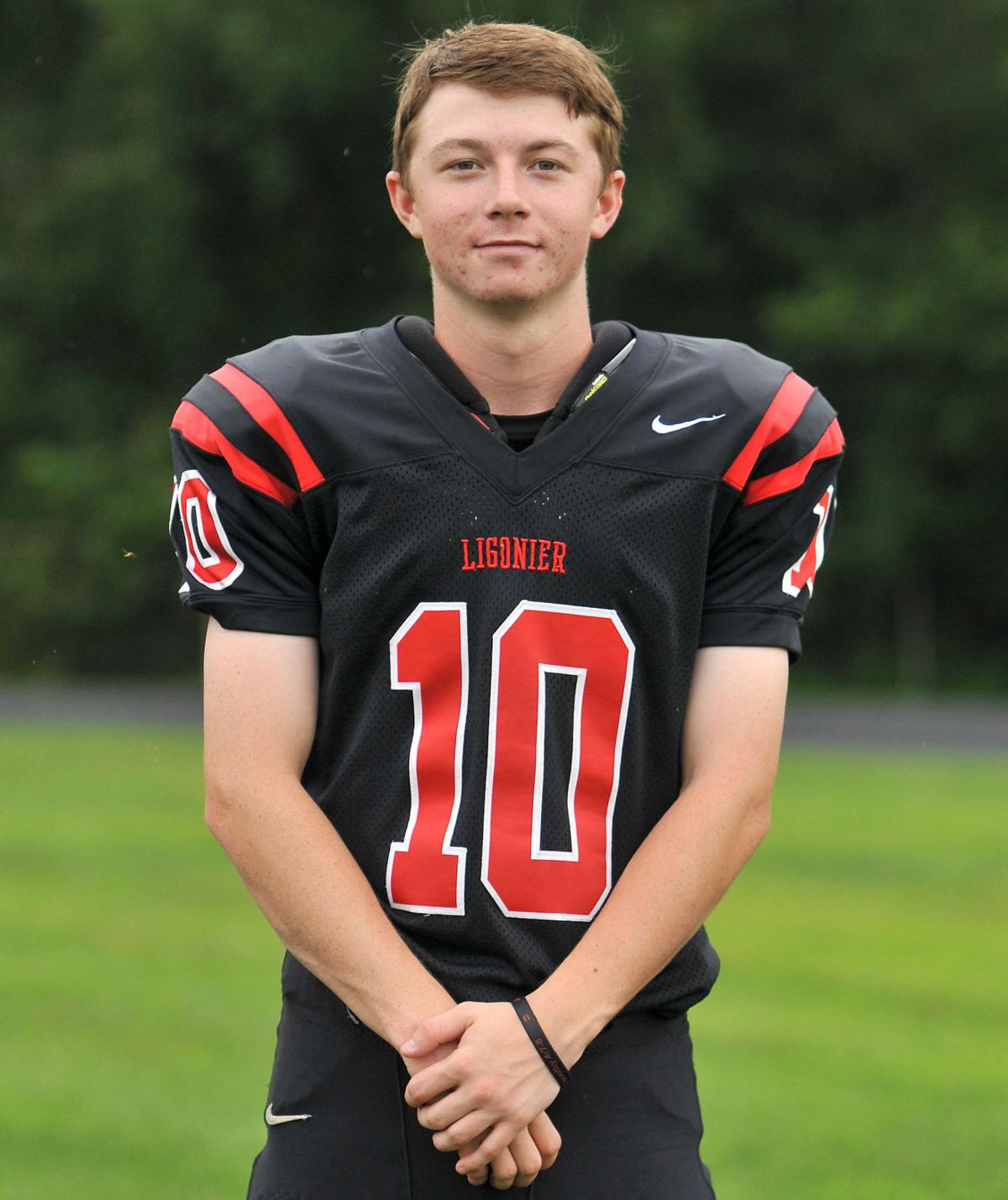 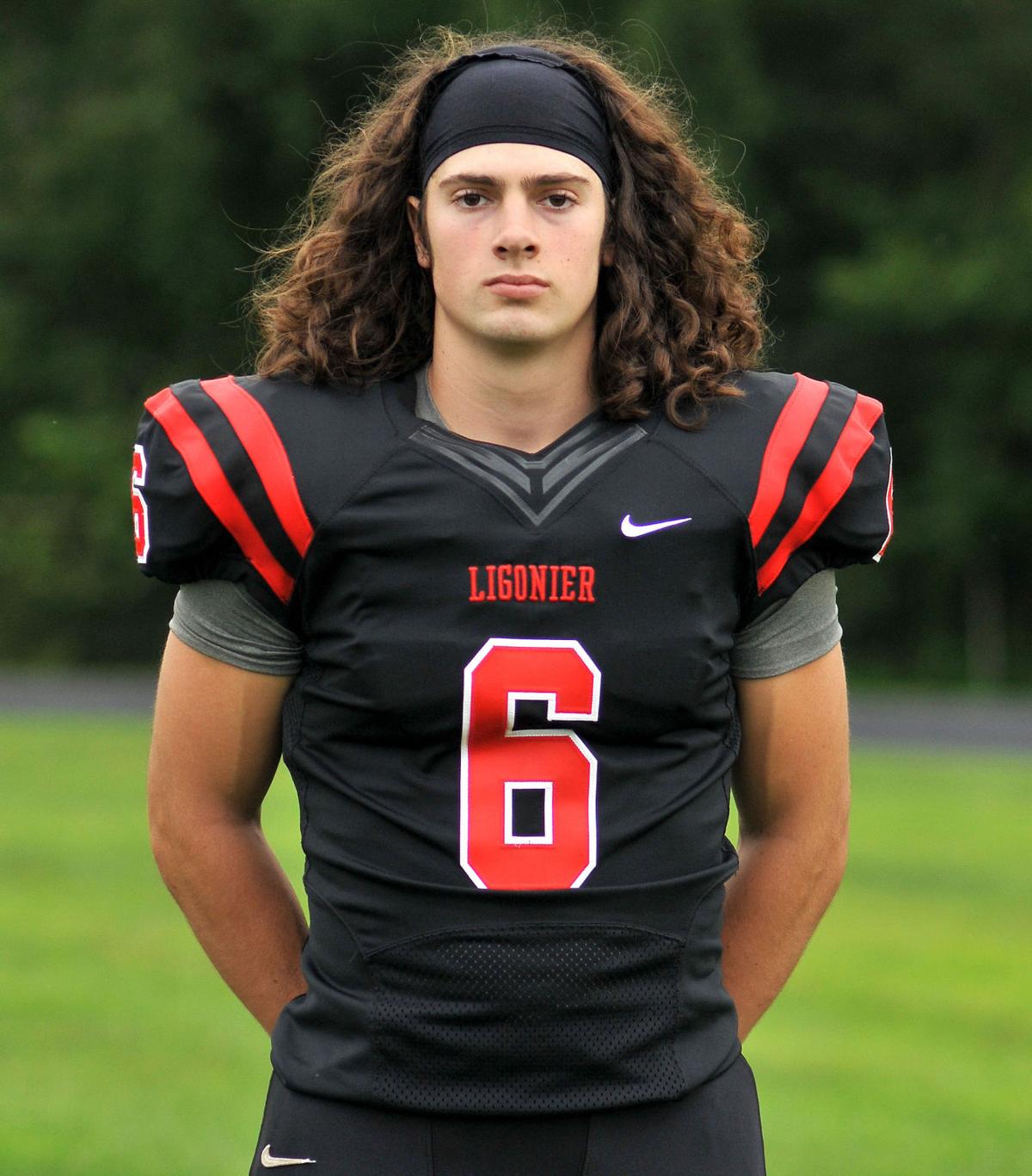 LIGONIER — It was a record-setting night for Ligonier Valley’s dynamic senior quarterback/wide receiver duo of John Caldwell and Aaron Tutino.

The Caldwell-Tutino combination also helped keep the two-time defending Heritage Conference champions unbeaten in league play at 6-0 while extending their league-best winning streak to 25 in a row with a 67-20 victory over Purchase Line on homecoming at muddy Weller Field.

Coach Roger Beitel gave game balls to Caldwell, whose seven touchdown tosses in a game are the most ever by an area quarterback, and Tutino. They teamed up for five touchdowns during a 40-point second-quarter explosion by the Rams.

“John and Aaron had great nights, and the records they broke are big-time records here,” Beitel said.

At halftime, Tutino was named the school’s homecoming king.

“I told him he should play the lottery,” Beitel said, jokingly.

Caldwell, who completed 20 of 23 passes, has 21 touchdown passes in five games and just two interceptions. The Rams also have a forfeit win over Saltsburg.

“(John) definitely deserves a lot more credit than he gets,” said Tutino, who finished with 12 receptions and has 11 touchdown catches this year. “He throws a great ball and he throws it to the right spot,

“It was a good night for both of us. Me and John, we have good chemistry.”

“We didn’t have the speed to catch him,” Purchase Line coach Matt Falisec said. “He’s quick. He has great hands. And he and Caldwell have great timing.”

Caldwell also threw a 12-yard scoring pass to John Beard with 15 seconds left in half, giving him six touchdown tosses in the second quarter.

Caldwell exited the game after connecting on a 12-yard scoring strike with Sam Sheeder a few minutes into the third quarter.

“We had everything clicking,” Caldwell said. “My line deserves a lot of credit. I don’t think I was touched all night, and that made things a lot easier for me.

“As for Aaron, he’s on another level. I just throw it and he goes and gets it.”

Ligonier Valley rolled up 553 yards of total offense and nine touchdowns, including two first-quarter rushing scores from Kyrie Miller of 31 yards and 1 yard. He managed a team-high 70 yards on 12 carries.

Third-string quarterback Miles Higgins scored on a 6-yard run in the fourth quarter.

Ligonier Valley has out-scored opponents 260-47, but the 20 points allowed to Purchase Line marks a season high.

The Red Dragons answered the Rams’ opening scoring drive with a score of their own as quarterback Jacob Barnett hit Josh Syster for a 35-yard touchdown in the first quarter.

But Purchase Line failed to convert the two-point conversion and Ligonier Valley took the ensuing kickoff and marched 12 plays and 56 yards and took a 14-6 lead on MIller’s second touchdown run late in the first quarter.

The Red Dragons fumbled on their next series, and Caldwell found Tutino two plays later for his first touchdown early in the second quarter to make it 21-6.

Purchase Line, which got a late fourth-quarter touchdown from Jayce Brooks, finished with 341 yards total offense, including 148 passing from Bartnett.

“I couldn’t care less what the score was,” Falisec said. “We played a good first half. But we kind of lost momentum after that fumble in the second quarter.”