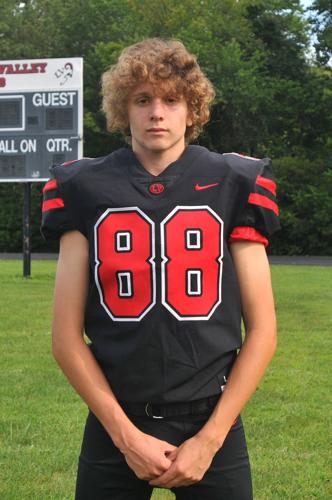 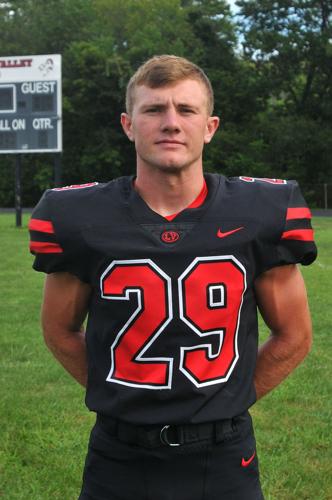 LIGONIER VALLEY — Ashton Perfetti, Ethan Kishlock, Cole Townsend and Robert Shirley: Some day they will all be answers to a special set of Heritage Conference football trivial pursuit questions.

“I’m excited that we just won our 37th conference game in a row, fourth consecutive conference championship,” said Ligonier Valley coach Roger Beitel. “I’m looking forward to the Appalachian Bowl next week. And that’s really all I have to say about that.”

The Bobcats spent most of the night pursuing Rams running back Kyrie Miller, who rushed for 258 yards, besting his own record by 2 yards, and scoring four touchdowns. With Miller leading the way, the Rams outrushed Blairsville, 417-24 and rolled up 561 total yards.

But those other names — Perfetti, Kishlock, Townsend and Shirley — played a role in Ligonier Valley’s apparent final Heritage chapter as well.

Perfetti, a junior Blairsville receiver, became the only opposing player to score a touchdown against Ligonier Valley’s first-team defense this season when he caught an 8-yard pass from Zak Artley in the third quarter.

As for Shirley, he scored the last points against the Rams when he caught the two-point conversion pass after Townsend’s touchdown. The 14 points represents the most scored on the Rams this season.

Blairsville stopped the Rams’ first drive of the game on a fumble recovered on the Bobcats’ 4, but tailback Sincere McFarlin was tackled in the end zone on the next play for a safety. It was one of eight times McFarlin would be tackled for a loss, and he finished the game with minus-13 rushing yards.

The Rams made it 9-0 when Miller scored on a 14-yard run later in the first quarter and extended the lead to 16-0 in the second quarter on a 35-yard pass to Cage Dowden.

Blairsville’s effort was hardly trivial. The Bobcats failed to score in the first half, but they held the Rams to their lowest first-half scoring output of the season at 23 points. To get there, Ligonier Valley needed to reach a little further than usual into the playbook.

Quarterback Sam Sheeder threw a 7-yard pass to John Beard on a curl route and Beard tossed a lateral to Miller, who took it the rest of the way for a 41-yard score with just 35 seconds left in the half. Blairsville argued that Beard’s lateral was a forward pass, but to no avail.

Nevertheless, Blairsville coach Rick Artley liked what he saw from his team in the first two quarters.

“We did some good things in that first half,” Rick Artley said. “I thought the big play was that we missed Cage (Kinney) on a touchdown (late in the half). We ran a hook-and-go and Zak threw it to the outside. It should have been a touchdown and it ended up being an interception (by Joe Ersick). But at that point, we were only down 16-0. We had a shot at making it 16-6 or 16-8, but didn’t take care of that and they get the hook-and-ladder right there at the end to take the 23-0 lead.

“(But) we were happy with a lot of the things we did in the first half. We put them in some third and fourth downs and they made some plays along the way. But there were things in that first half that just got away from us in the second half.”

Ligonier Valley made adjustments to its running game at halftime and it showed right away. Miller shot through a gap on the right side for a 56-yard touchdown run on the second play from scrimmage.

“In the first half, I was a little slow getting off the ball,” Miller said. “As soon as I got the ball, I was trying to take my time a little too much. In the second half, I just took off with it. I wasn’t going to wait. I needed to get yardage quick.”

After Perfetti scored, Miller brought the Rams right back with a 21-yard touchdown run on the next possession.

A 19-yard pass from Sheeder to receiver Matthew Marinchak on a crossing pattern through the end zone gave the Rams a 44-6 lead with a kick by Beard and triggered the mercy rule with 3:00 to play in the quarter. Beard finished 8-for-8 on PAT kicks.

With the first-team units off the field for both teams in the fourth quarter, Nick Beitel scored on 10-yard runs on back-to-back possessions to boost the Rams’ lead to 58-6.

Roger Beitel was most impressed with how Blairsville protected Zak Artley. The Rams defense failed to sack the Blairsville junior, who completed 13 of 24 passes for 197 yards.

Ligonier Valley will represent the conference next Saturday in the Appalachian Bowl against Portage at Penns Manor. The Rams will be looking for their fourth consecutive bowl championship before heading into the District 6 Class 2A playoffs.

The Appalachian Bowl caps the Heritage Conference-WestPAC slate of 10 games scheduled for next weekend. Blairsville, which put itself in the hunt for a District 6 1A playoff berth with back-to-back wins against Northern Cambria and Homer-Center, plays host to Blacklick Valley on Friday.