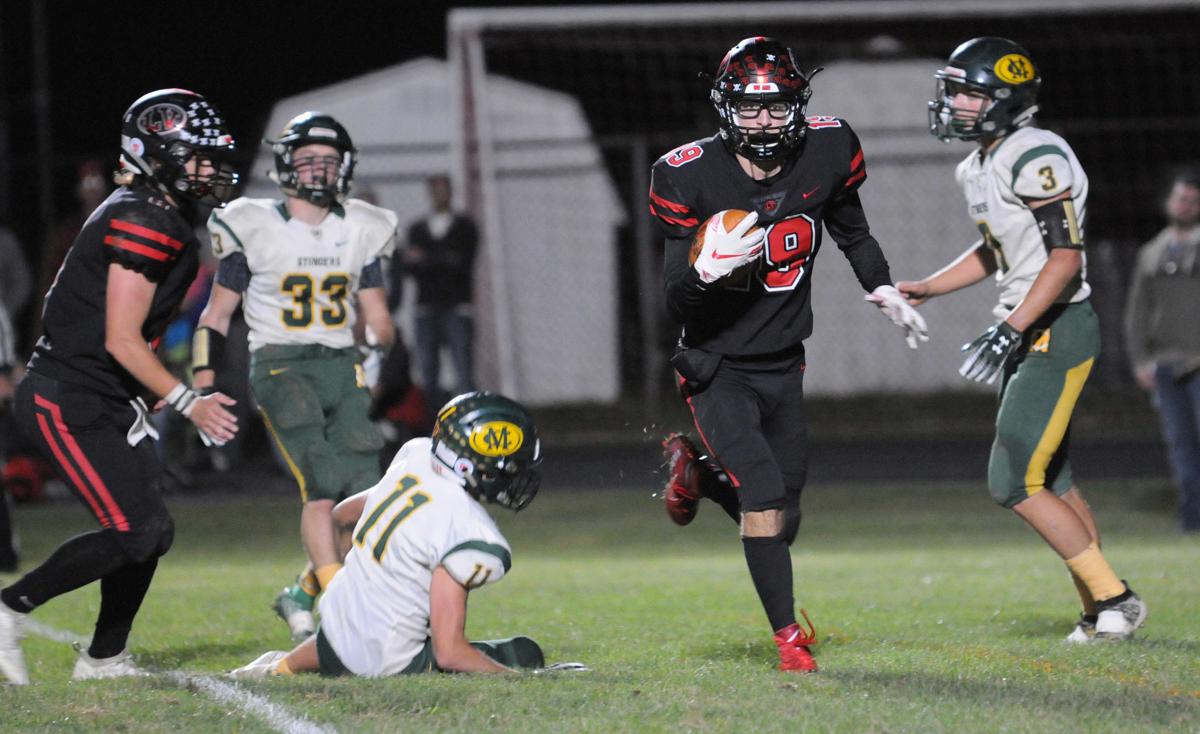 LIGONIER — The significance of the moment sure wasn’t lost on Roger Beitel.

Freshly doused in two coolers’ worth of ice water by his players, the Ligonier Valley coach could be heard raining praise of “legendary” from inside a crowd of Rams on Friday night.

It was just the first goal of many for a team that will be expected to again compete well beyond the regular season. But with another blowout victory — this time a 46-0 win over budding Marion Center at Weller Field — it was also one that had been accomplished only once before.

Ligonier Valley celebrated its homecoming by securing its fourth straight Heritage Conference football championship, matching the 2002-05 Blairsville teams for the most consecutive titles in league history on the night senior running back Kyrie Miller set the program record for career rushing touchdowns.

“We’re it. We’re the four-time Heritage Conference champions,” Beitel said. “Our kids, I’m proud of them. … For them to rise up, not worry about the outside noise and get after it the way that they do, I couldn’t be more proud of them.”

“It feels awesome, especially against a good football team,” Miller said. “They had high aspirations of beating us and they were in our way and that’s who we had this week.”

Ligonier Valley (7-0) won its 35th consecutive conference game and holds the tiebreaker for the title over the three two-loss teams.

The championship will send the Rams to their fourth straight Appalachian Bowl, a game that they have yet to lose, which will be played Oct. 25 at Penns Manor’s Pat Corrigan Field. The annual crossover game features the Heritage Conference champion and the winner of the WestPAC, which currently has a logjam atop of the standings with 7-0 Meyersdale leading 6-1 Berlin and Portage by one game.

If they survive a trip to Northern Cambria next Friday and a visit from Blairsville, the Rams will aim to punctuate their fourth straight undefeated regular season.

Meanwhile, Marion Center (5-2) remained in third place in the conference standings, losing the head-to-head tiebreaker to Homer-Center in the Stingers’ first defeat, a 35-13 decision on Sept. 13.

The Stingers will look to regroup in a visit from Penns Manor next Friday followed by a trip to United — teams that are a combined 2-12 — before its WestPAC crossover game. But despite a rare setback for a program that has turned a corner under second-year coach Adam Rising, Marion Center sees little reason to panic or look too far ahead.

“They’re going to react in a positive way,” Rising said. “From a mental standpoint, we have to a get a little bit tougher. There were some situations where we have to keep cool, calm, collected and poised and continue to move forward. But this is a good group of kids that likes to battle.

“Penns Manor comes to our place next Friday, and that’s what we have to get ready for. We have an area of the district where the kids on the left side of the road go to PM and the kids on the right side go to Marion Center, so it’s a good backyard rivalry, and that’s where our focus is going to be going into this week.”

Marion Center started strong defensively and accomplished what few have in recent years, forcing Ligonier Valley off the field on fourth down on two of the Rams’ first three possessions. Unfortunately, the Stingers’ offense sputtered amid multiple miscues, and Marion Center eventually gave way to the Rams’ 5-foot-9 senior workhorse.

Miller scored the Rams’ first three touchdowns on runs of 4, 45 and 27 yards, the last of which etched his named into Ligonier Valley’s record book. He increased his career rushing touchdown total to 48, breaking the mark set by Collin Moore in 2016.

Miller, who leads the area with 21 touchdowns this season, rushed for 116 yards on 14 carries while becoming the first in the area to break four figures at 1,041 yards.

Still, the record-breaking running back deflected all praise to the big Rams paving the way up front.

“Although it’s my title, technically, my line deserves most of the credit,” Miller said. “They’re the ones opening up the holes for me. Half the time I barely get touched until maybe 15 yards into the play, so honestly, the credit goes to them.”

Ligonier Valley quarterback/linebacker Sam Sheeder also had a hand in a trio of touchdowns. He threw a 13-yard touchdown to John Beard, tossed a 19-yard touchdown to Ethan Boring and returned one of his two interceptions 87 yards for a score.

It was Ligonier Valley’s defense, though, that arguably impacted Marion Center the most, including a an interception and a blocked punt by Beard and an interception by Ayden Kelley.

The Stingers entered Friday ranked behind only the Rams with 33.2 points per game and fourth in the conference with 211.7 rushing yards per game.

“We’re disappointed that we didn’t get to see the running game that we anticipated,” Beitel said. “We practiced all week and then the opponent comes out throwing it, empty and gun and things like that. So we had to get adjusted to that, because that’s not what we practiced all week. We practiced a pretty big, heavy front for a run game and never saw it. Our kids were really motivated to see that running game, but they took it right out of the playbook. I’m not sure why.”

Rising said that was the game plan going in, eluding to a Ligonier Valley defensive line that includes three Division I college prospects — Christian Jablonski, Michael Petrof and Wylie Spiker — and had allowed only 60 rushing yards per game entering Friday.

Marion Center had early chances to take advantage of the Rams’ aggressive defensive rush, but mistimed throws and drops plagued the Stingers throughout.

“We had opportunities to be with them. We were with them,” Rising said. “That first quarter and second quarter, we battled at times. Unfortunately, we just didn’t put enough plays together and take advantage of opportunities when they presented themselves.”

Clayton Coble had an interception for the Stingers, and Brady Tonkin led the offense with 43 receiving yards on a pair of catches.