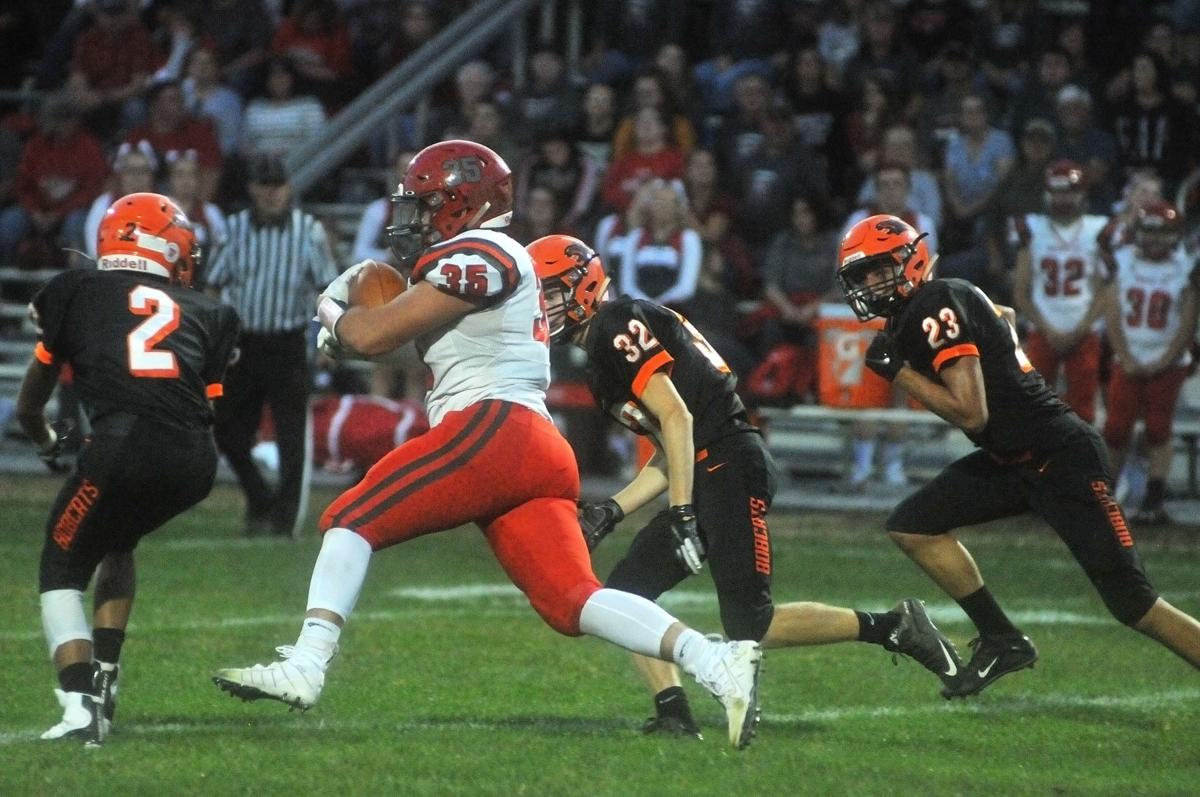 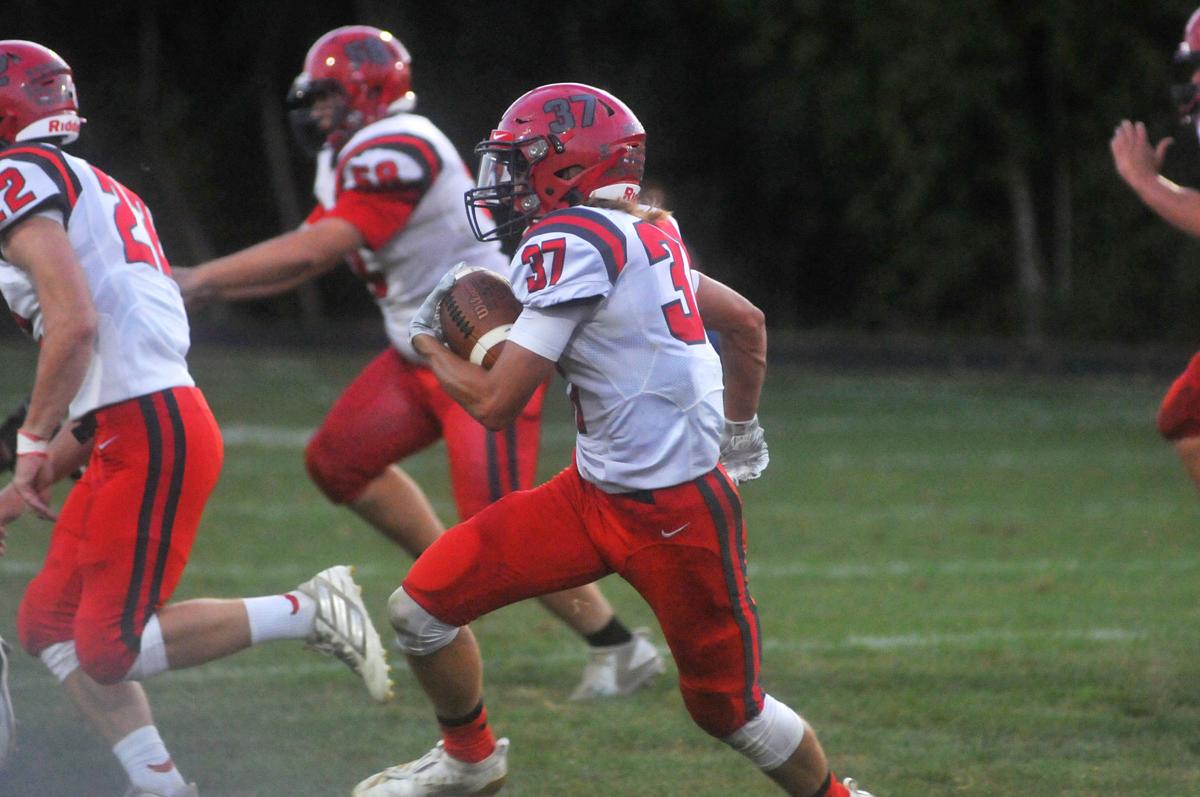 BLAIRSVILLE — Purchase Line center Matt Gooderham called them powers and skins, but they landed more like jabs, uppercuts and haymakers.

The Red Dragons delivered the punches and the Blairsville Bobcats failed to counterpunch. They took it right in the kisser in a Red Dragons’ 42-16 win on Ernie Widmar Field at Memorial Stadium Friday night.

Purchase Line’s offensive and defensive lines won round after round, rushing for 369 yards on 47 attempts (7.9 yards per carry) while pushing Blairsville behind the sticks again and again. The Bobcats were held to 13 yards on 24 carries. Throw in a team loss of 29 yards on a bad punt snap and Blairsville finished with minus-16 rushing yards.

Not counting the errant punt snap, Blairsville ran 53 offensive plays and 32 went for no gain or a loss.

“When teams punch you in the mouth, you have to have a response and we really didn’t,” Blairsville coach Rick Artley said. “We got dominated up front. We said it coming in: When you win the line of scrimmage, you’re going to win most games. That’s something they won easily tonight on both sides of the ball. It dictated the whole game.”

Purchase Line tailback Josh Syster accounted for 167 yards on 13 carries and fullback Cullen Goncher bulled ahead for another 81 yards on 13 attempts.

“We’ve been waiting for our offensive line to do this,” Purchase Line coach Matt Falisec said. “We challenged them a little bit. They stepped up and I thought they did a great job. We never punted the ball, and I think we could have scored more points.”

The Red Dragons scored enough in the first quarter.

Purchase Line scored 21 points before Blairsville finally gained a first down in the opening seconds of the second quarter, and the Red Dragons led the Bobcats 35-6 at halftime.

Blairsville actually appeared to have Purchase Line stopped on the opening possession of the game, but the Red Dragons opted to go for it on fourth-and-2 from their own 49. Quarterback Jacob Barnett picked up the first down on a 4-yard keeper, then two plays later, he delivered a 46-yard touchdown pass to a wide-open Syster, and the first-quarter romp was on.

After a three-and-out by the Blairsville offense, Syster scored again on a 23-yard run to cap a five-play drive. Then it was Kyle Day’s turn with a 6-yard scoring run on a counter late in the quarter.

Just about everything worked for the Red Dragons’ running game, which gained positive yardage on all but one of 27 attempts in the first half.

“We worked a lot this week on how their ’backers blitzed and how to pick them up,” Gooderham said. “It was a lot of just good blocks. Powers … we were trapping well, getting the guts up in … and skins, it was great. We were just getting on people and driving them. We were getting 5, 10 yards every time.”

Blairsville finally recorded a first down when tailback Sincere McFarlin picked up 2 yards on a fourth-and-1 play 50 seconds in the second quarter, but a few plays later Blairsville turned the ball over on downs when quarterback Zak Artley failed to connect with Robert Shirley on a fake-punt pass.

Later in the quarter, the Red Dragons took advantage of that bad snap over punter Devon Witmer’s head. Purchase Line defenders chased Witmer down at the Blairsville 11, then Syster scored on the next play to give Purchase Line a four-touchdown lead.

Zak Artley and McFarlin combined for Blairsville’s only bright spot of the first half on a 35-yard screen play to the Purchase Line 1. McFarlin took it over the line two plays later, and tight end Cole Townsend caught Artley’s two-point pass to make it 28-8 with 4:00 remaining in the half.

Goncher scored on a pair of 2-yard runs, one just before halftime and another midway through the third quarter, to wrap up Purchase Line’s scoring.

Blairsville added a late touchdown by Zak Artley, a 1-yard dive with 2:59 left in the game, set up by a 24-yard pass to wideout to Jacob Mocek.

Artley completed 10 of 29 passes for 171 yards with two interceptions. While McFarlin managed little on the ground with just 38 yards, he caught four passes for 96 yards.

If Purchase Line failed in any department, it was in speeding up the outcome. Beginning with Goncher’s second touchdown in the third quarter, the Red Dragons had three opportunities to put the game under the mercy rule and did not.

After the second Goncher touchdown, instead of going for two points, Purchase Line opted for kicker Logan McCracken to make his sixth point-after boot of the game, and he did, giving Purchase Line at 34-point lead. Thirty-five points are needed for the mercy rule to take effect.

The Red Dragons had another opportunity on the first play of the fourth quarter. With Syster and Goncher out of the game on offense, senior Hunter Antisdel got the call from the Blairsville 5 and ran wide toward the pylon, only to have the ball stripped by Mocek. The ball rolled inside the pylon for a touchback.

On the next possession, the Red Dragons took another shot at the end zone on a pass by backup quarterback Andrew Beer, but the throw was picked off by cornerback Jesse Klingensmith, who had dropped another interception opportunity late in the first half.

But while it didn’t reach a mercy-rule lead, Purchase Line scored the most points it has ever tallied on Blairsville in regulation dating to at least 1960.