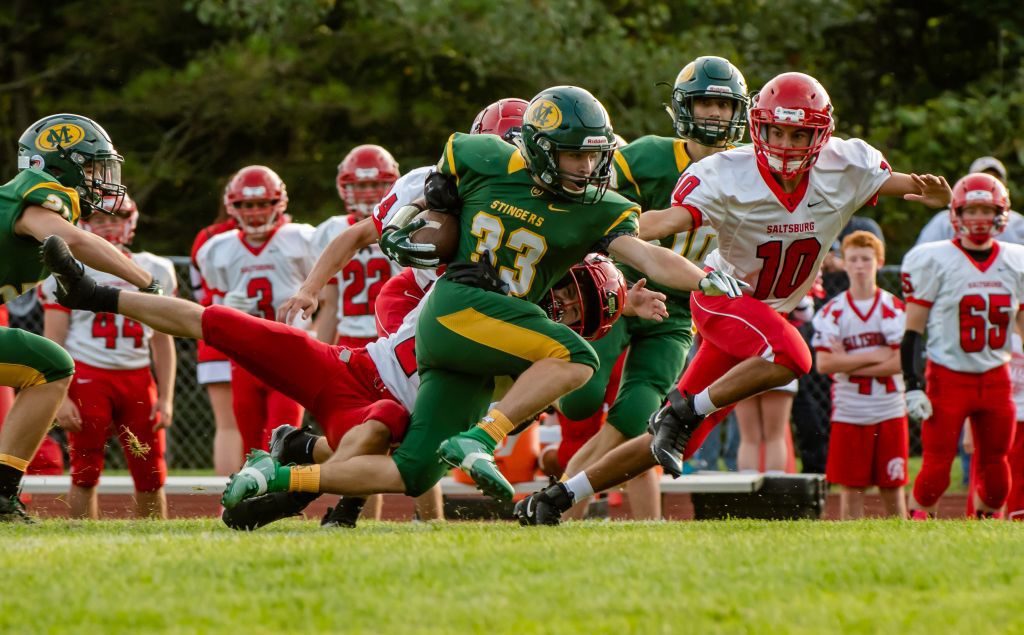 Marion Center's Garet Wells took off as part of a 240-yard effort in Friday's season-opening win over Saltsburg. 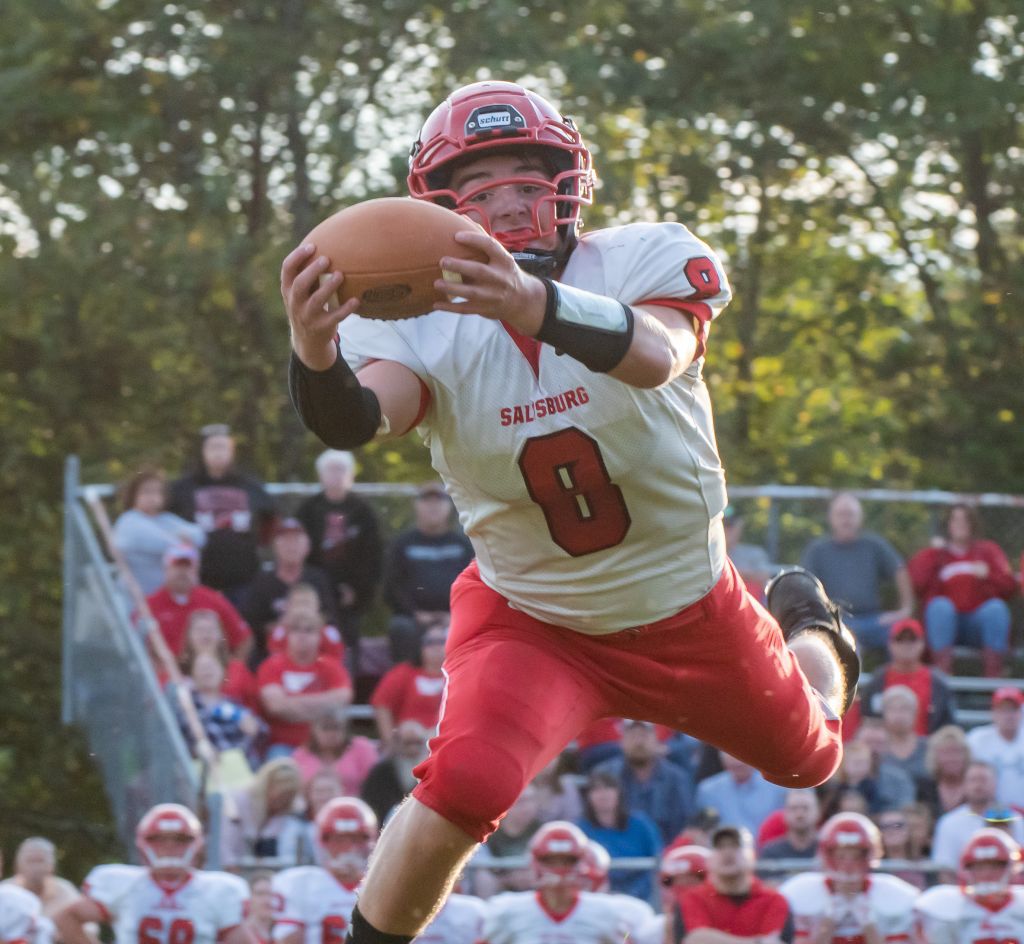 Saltsburg's Gino Bartolini hauled in a pass that helped fuel the drive for a touchdown on his team's opening possession.

Marion Center's Garet Wells took off as part of a 240-yard effort in Friday's season-opening win over Saltsburg.

Saltsburg's Gino Bartolini hauled in a pass that helped fuel the drive for a touchdown on his team's opening possession.

MARION CENTER — It was only the first game of the year, but Friday night’s matchup at John R. Malino Stadium felt like an important Week 7 game.

At times, both teams looked in midseason form. Other times, it was clear that it was the opener. Nonetheless, the back-and-forth shootout between Saltsburg and Marion Center was an exciting start to the 2019 season.

Garret Wells rushed for 240 yards and scored the go-ahead touchdown for the Stingers with 3:14 left to play, and Marion Center hung on for a 41-34 victory over the Trojans despite Saltsburg’s best effort in the final two minutes.

Marion Center capitalized on back-to-back turnovers by Saltsburg in the second quarter to take a 33-20 lead into halftime. The Trojans responded by scoring on their first two possessions of the second half to take a 34-33 lead with 6:36 remaining.

“It’s just a great feeling all around,” Marion Center coach Adam Rising said. “I’m proud of our kids with the process, and to be able to pull it out Week 1, especially in the fourth quarter.

“Our kids, we got punched back — they took the lead — and we had that mental toughness to be able to stay in there and continue to battle.”

Wells scored four touchdowns on a night when Rising was committed to giving the ball to his workhorse as the offense continues to progress early in the season. Wells finished with 31 carries.

“It felt great,” Wells said. “Give props to our line. They’re the ones that really stepped up. If it wasn’t for them, we wouldn’t have even been close in that game.”

Josh Gibbons rushed for 140 yards, passed for 157 yards and scored twice for Saltsburg.

Gino Bartolini, Angelo Bartolini and Alex Lassick also scored for Saltsburg, which was playing without coach Mike Leasure, who missed the week with an injury.

Gaven Palko added two touchdowns for the Stingers, who were looking to get a win over Saltsburg after losing to the Trojans early last season.

“Give our kids all the credit in the world,” Rising said. “To get a win Week 1 — and especially in a shootout game — our kids have worked really hard up to this point. We were so close last year against them.”

Saltsburg looked to be set up to put together the game-winning drive when it got the ball back with 2:25 left. But the Stingers were finally able to slow down Gibbons and hold on for the win.

“We were just trying to get the ball down the field,” Gibbons said. “We only had two minutes to do it, so we were trying to get little chunks at a time and work it down the field. We were trying to stick to our passing game and trying to pick up a couple yards here and there. Our running game wasn’t too bad today, so we tried hammering it up the middle a couple times. They played solid defense, and they held us down and kept our receivers from getting open.”

“They’re a good ball team,” Wells said of Saltsburg. “We knew Gibbons was going to scramble and throw the ball, and we knew we had to make big plays when we had the opportunity to.”

Saltsburg opened the scoring with a 7-yard run by Gibbons with 4:34 on the clock in the first quarter. Marion Center answered on its next play from scrimmage when Wells scored from 22 yards.

“Football is his sport,” Rising said of Wells. “He eats, breaths, sleeps it and some of it is in his blood. He works hard in the offseason. Pound-for-pound, he’s a tough kid. We just kept feeding him. The line did a great job up front. Hats off to Hunter Lydic and Landin Bennett, who is a sophomore tonight starting. Gavin Effinger, Clayton Coble, Marvin Beatty, Jonah Vaglia — all those guys up front deserve a lot of credit, and Garret would be the first one to say that.

“Keegan Whitfield also ran the ball real well and Xavier Vaglia, so we have some really nice complementary backs, but Garret is a workhorse, and he gets those tough yards when the opportunity presents itself.”

Wells scored again with 9:04 left in the second quarter, but the Trojans responded with a big 65-yard touchdown run by Gino Bartolini to tie it at 14. Marion Center then scored on three straight possessions — two off turnovers — to gain the halftime advantage.

Lassick scored on a 2-yard run with 10:10 left in the third, and Gibbons scampered 45 yards for a touchdown and the lead with 6:36 remaining.

“Today, whoever had the ball had the momentum,” said Saltsburg receiver Nathan Slapinski, who caught four passes for 48 yards. “We have a good offense — that’s the way it’s been for the last couple  years with Josh QBing, but our defense really needs to step up in the coming weeks because we can’t let up 41 points in a game and expect to win.”

“They’re primarily a Wing-T offense, so we studied the film, and they hammered it to us,” Bartolini added. “We need to make some changes on defense to try to figure out how to stop that.”

Marion Center finished with no passing yards and the Trojans outgained the Stingers 393-262, but they were able to eat up yards and clock with their running game.

Both teams look to build on the good and the bad of what they learned from Friday night’s early-season showdown. Marion Center, which gained momentum throughout last year, hopes to continue its climb while the young Trojans want to get rolling after winning their first playoff game since 1991 last season.

“For half of the guys on the football team, this was their first high school game,” Gibbons said. “Whether they’re freshmen or just their first year playing, they got some good experience with this game tonight. Marion Center is a really good ball team. They hit hard every time you play them, and Garret Wells, you just have to give him props for what he did tonight. You hit him behind the line, and he just powers ahead for 7 yards. It’s tough.”

“We have to get better at tackling,” Rising said. “We’re going to see nice backs like Gibbons. That’s one thing that’s sticking out right now is executing from a defensive standpoint. We made enough adjustments at the end here to hold on and win. Some of these younger guys on the field definitely learned a lot of football this evening. We’ll be eager to get back to work on Monday.”