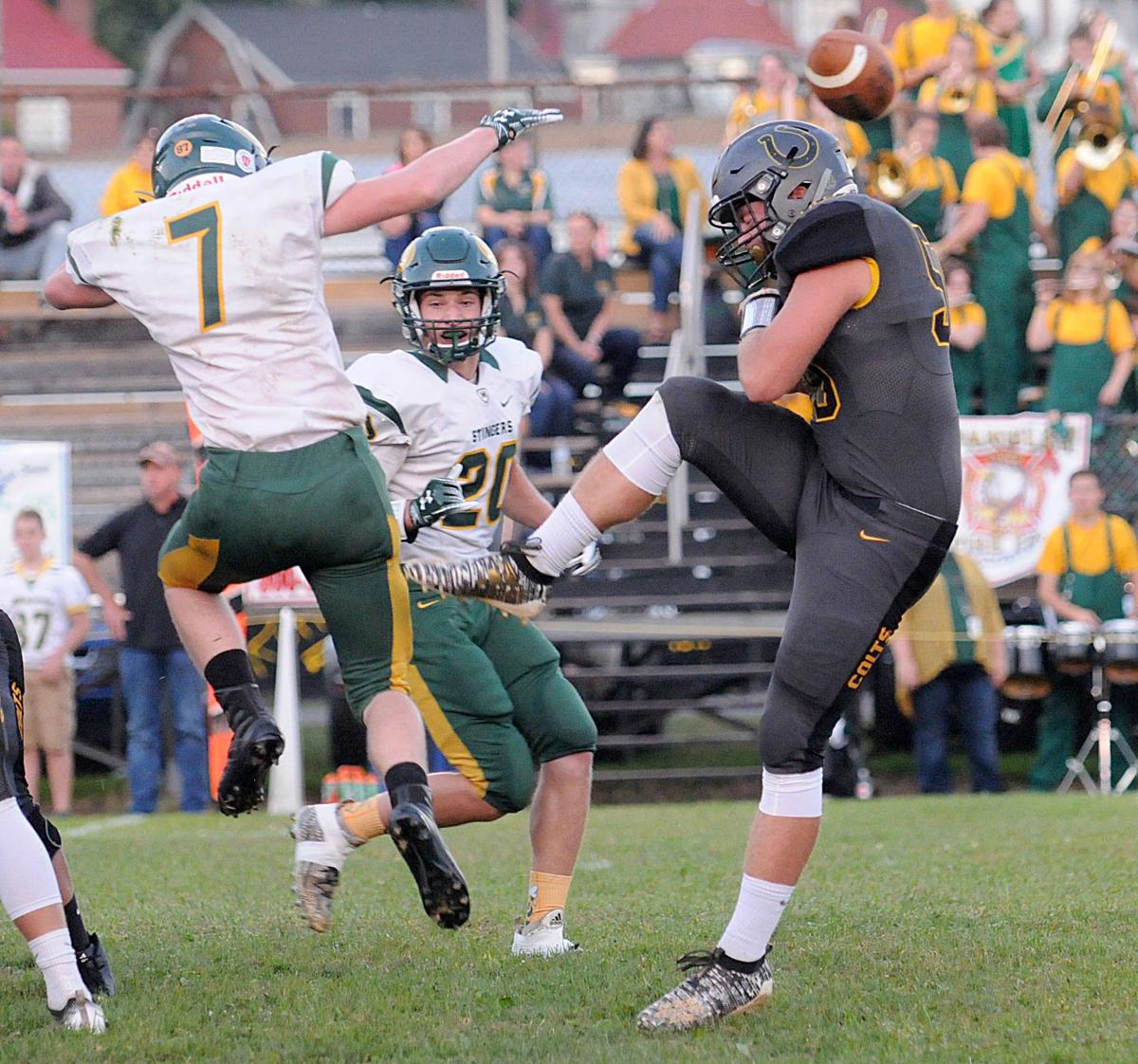 Marion Center’s Mike Wise (7) blocked a punt attempt by Northern Cambria’s Jorden Wise, and Xavier Baglia (20) scooped up the ball and returned it for a touchdown. 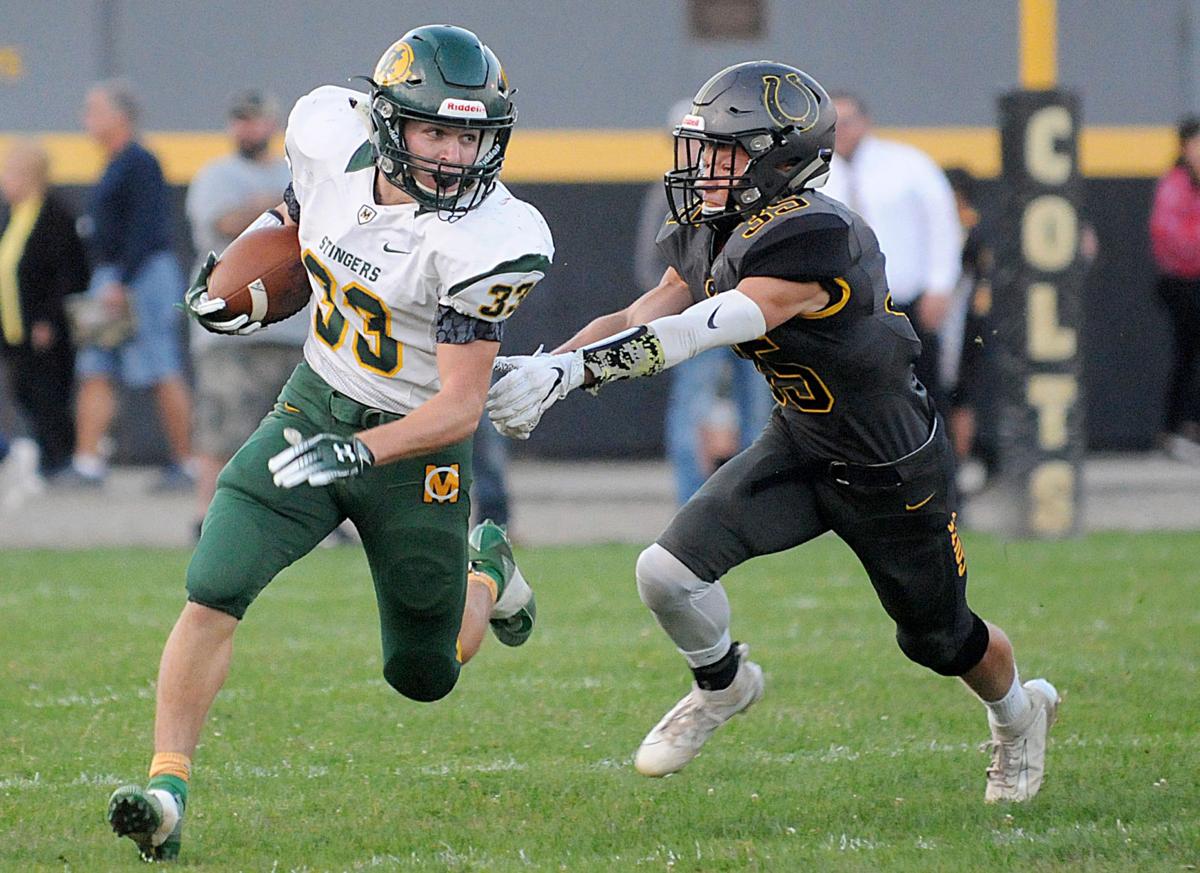 “We do it like every Thursday. That’s about it,” Stingers senior Mike Wise said. “We just go over it.”

The Stingers’ special teams are turning in a special season, anyway, though.

Wise blocked a punt that was run back for a touchdown, and Garret Wells had two long punt returns in the pivotal third quarter as Marion Center bounced back from its first loss of the season with a 24-7 Heritage Conference victory at Northern Cambria’s Duffy Daugherty Stadium on Friday night.

The Stingers raised their record to 4-1.

“This is an important win, because last week, we didn’t come out very well. We left it on the field. We didn’t get the ‘W,’” Stingers senior captain Clayton Coble said. “This week, we came out and got it done.”

Wells rushed for a team-high 73 yards and caught a game-high five passes for 57 more yards. He took over the game in the third quarter, though, when he accounted for 123 all-purpose yards, scoring on a 7-yard run and a 30-yard reception that broke the game open after Marion Center led by just six at halftime.

Both of Wells’ third-quarter touchdowns were set up by long punt returns, the first covering 22 yards and the second 37 yards. The touchdown catch was a thing of beauty, as Wells snared a Ty Ryen pass one-handed in the flat, shook free from Colts defensive back Adam Kopera, and then raced down the sideline before cutting back against the grain into the end zone to make it an 18-point difference.

“It was important to get our momentum going and to get back into it, knowing that we could do it,” Wells said. “It was tough coming off a loss, but we got back after it (at practice on) Monday. We were all mad that we lost. We just got back at it. We beat each other up all week, then we got out here and got to hit new people.”

The biggest hit might have been from Wise early in the contest. He poured in on Northern Cambria punter Jorden Wise at the conclusion of the Colts’ first series and blocked his kick. The ball rolled back 22 yards to the Northern Cambria 12, where Xavier Vaglia gathered it in and took it into the end zone less than three minutes into the game.

“The special teams does a nice job,” Marion Center coach Adam Rising said. “I think that’s the third or fourth punt we’ve blocked this season. It’s been instrumental. All the way around the board, special teams have been really, really good.”

The Stingers actually were outgained by the Colts, 252-222, but they were able to capitalize on shorter fields to overcome that. In addition to the blocked punt and Wells’ punt returns, Marion Center also tackled Jorden Wise for a 10-yard loss before he could get off a punt, tackled Gavin Dumm for a 1-yard loss on a fake punt and recovered an onside kick.

“It helped us out a lot,” Mike Wise said of the special teams. “That gave us a lot of motivation. It kept us going.”

Northern Cambria was celebrating homecoming. The Colts received 93 yards rushing from Owen Prasko, who was playing behind center in place of injured quarterback Mike Hoover. Kopera added 78 yards on the ground.

However, the Colts’ only points came as a result of Prasko’s 6-yard run in the final minutes. It was the second straight game Northern Cambria (2-3) was held to single-digits and also their first home setback in nine games.

As if things weren’t difficult enough for the Colts, starters P.J. Copeland, Joe Rezk, Kopera and Isaac Noll got injured during the game and didn’t return. Kopera and Noll were carried off the field after being hurt on Marion Center’s last touchdown, a 16-yard pass from Ryen to Gaven Palko with 4:13 left.

Kopera and Noll both were walking around under their own power later, but it was the continuation of a problematic trend for the Colts this season.

“You have a senior or junior who is seasoned and ready to play, and then you have to bring a freshman in who is not ready. That’s where we’re at right now,” Northern Cambria coach Sam Shutty said. “There was a time when we had four guys who weren’t normally there. I’m sure they were asking questions.”

Shutty expressed satisfaction with Prasko’s performance, moving from running back to fill in for Hoover. The Colts ran more read option than with Hoover, who is more of a passer. The metamorphosis is going to have to continue.

“It was different. A lot of players got hurt, so we’re going to have to change up a little bit of our offense. It’s pretty tough,” Prasko said.

The Colts drove into the red zone three times, but were stopped on downs at the Marion Center 9 in the first quarter when they had a chance to take the lead, then were turned away again late in the third quarter after Kopera’s 36-yard run gave them a first-and-goal at the 10.

Marion Center, meanwhile, pulled to within one win of reaching last season’s victory total. The Stingers will try to match that next week at home against Blairsville.

“It’s good to string some wins together. We just want to keep it rolling,” Coble said.

“We knew we had to come out and win,” Wells said.