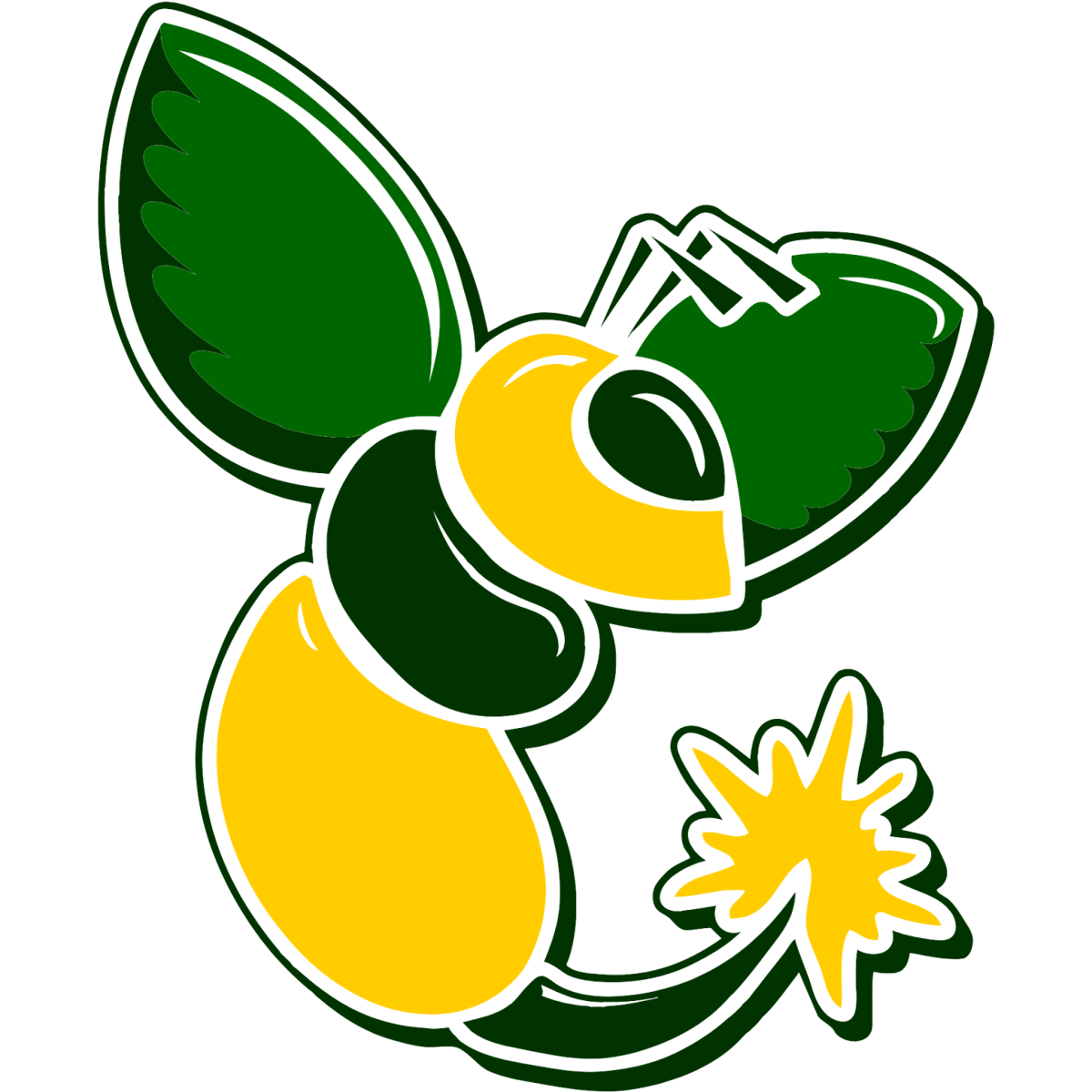 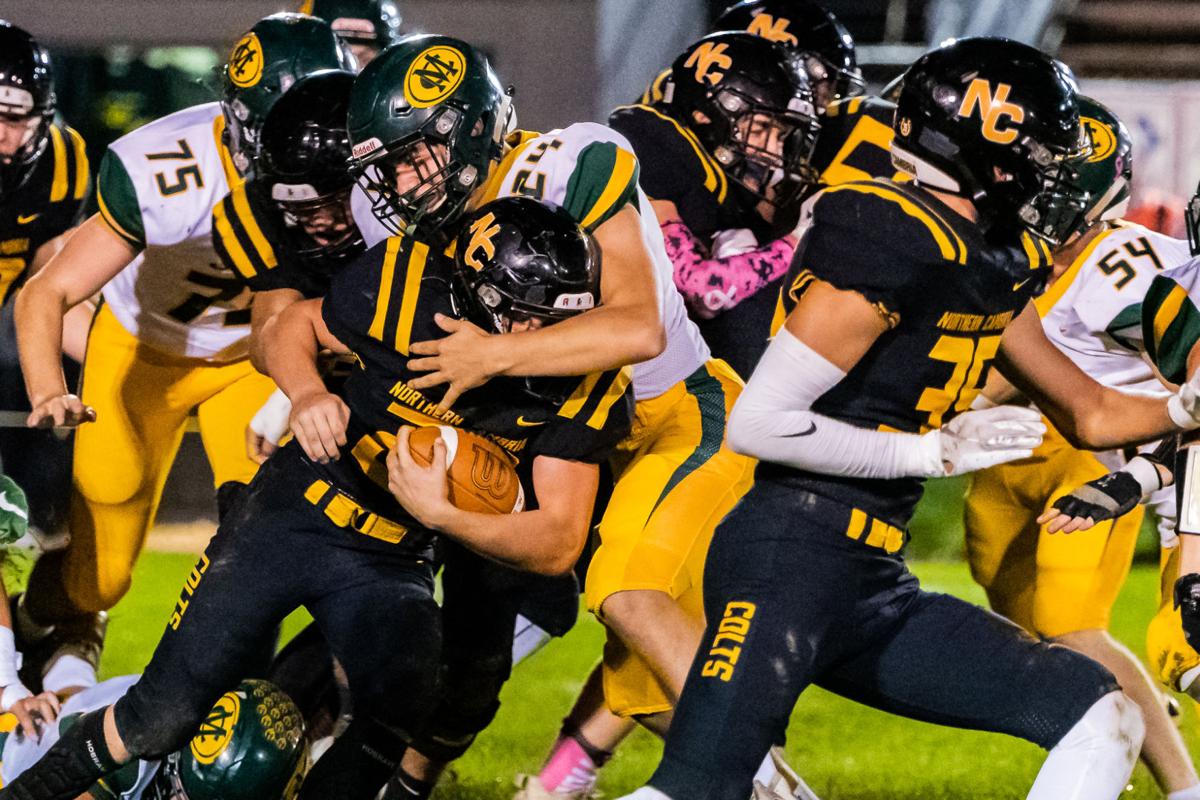 NORTHERN CAMBRIA — While his plan was to beat Northern Cambria on the ground Friday night, Marion Center coach Adam Rising received a pleasant surprise from his special teams unit.

Shooting the gap and overwhelming Northern Cambria up front, the Stingers blocked two punts that eventually resulted in touchdowns and shut the door defensively against the reeling Colts to escape with a 21-7 victory.

“Our special teams play was huge and made a big difference in the game tonight,” Rising said. “We saw a few things on (Northern Cambria’s) punt team that we thought we could maybe attack, and we executed touchdowns off of two punt blocks. We take a lot of pride in special teams. It’s one-third of the game, and we’ve gotten a lot better over the last couple games.”

Special teams was a major factor for Marion Center (3-4) from the get go.

With his back close to his own end zone, the punt from Northern Cambria punter Cody Dumm was blocked by a sea of defenders, and Marion Center hopped on the sputtering football to take over at the Colts own 14-yard line.

Two plays later, junior running back Leo Cornetto fought through a pair of defenders and scampered into the endzone for an 8-yard score.

“Special teams is just as important as offense and defense, and coach constantly preaches that to us,” Cornetto said. “I think special teams was really the difference tonight.”

Creeping toward the midway point of the third quarter, the Stinger special teams unit cashed in again. Junior 6-foot-3 lineman Parker Black burst through the Colts line and leaped in front of the kick from Dumm, setting his team up for first-and-goal.

Three plays later, Stinger quarterback Ty Ryen fought the trenches on a quarterback keeper and scored from 1-yard out to provide Marion an insurmountable 21-7 lead.

“I just cut through the guard and center and put my arms up,” Black said of his crucial punt block. “I was lucky enough to block it.”

Northern Cambria (1-6) fell short despite outgaining the Stingers with 191 yards of total offense.

Much of the Colts’ yardage was through splash plays from junior running back Peyton Myers.

Myers tied the game at 6:49 of the second quarter after he carried the ball on a triple right rush and burst upfield untouched for a 69-yard touchdown run, and he produced 103 yards rushing on only five carries.

It was a chippy game between conference rivals, with plenty of yellow laundry sputtered throughout the field.

The Stingers were flagged seven times for 85 yards, including three blindside blocks called all on one punt return in the second half. There were six personal foul penalties assessed between the two teams.

“We have to be more disciplined,” Rising said. “We have to keep our poise and play with a little more composure.”

While Marion Center may have been a bit too aggressive in the first half, it reigned in the emotions for the second half but still deployed an aggressive style of football.

Northern Cambria was stuffed twice on fourth down, including once from the Marion Center 3-yard line, which helped keep the two-touchdown lead entact.

When they didn’t have the best field position to start a drive, the Stingers doubled-down on the ground game to inch upfield.

Cornetto and senior running back Brady Tonkin carried much of the weight on the ground by hogging up 24 of Marion Center’s 33 carries, and the Stingers threw the ball just seven times, with the quarterback Ryen completing four passes for 23 yards.

“We ran the ball much better tonight than we have earlier this year,” said Tonkin, who paced the Stingers with 15 carries for 93 yards. “We haven’t really been able to establish the run game the past few games, and we wanted to capitalize on letting people know that we can make the blocks and run hard. I think we did that tonight.”

Despite having the week off after forfeiting last week’s matchup with West Shamokin, Northern Cambria suffered its sixth loss this season.

Although his team has faced plenty of adversity this season and has found itself on the losing end several times, Northern Cambria coach Sam Shutty said there were several positive takeaways from the bout with Marion Center.

“I’m really proud of our guys and how they played,” Shutty said. “They played hard, and they played with a lot of heart. They played a little mad today and a little angry, but I think their confidence is really starting to grow. I think we needed a game like this. Unfortunately we didn’t win on the scoreboard, but I think we won in many other ways.”

Marion Center was able to get its season back on track after enduring a four-game losing skid. The Stingers opened the season with convincing victories against Blacklick Valley and Penns Manor, but they have been on a downward trend for the past few weeks.

After a convincing showing against the Colts, the players at Marion Center said they feel the team is trending upward again.

“It was very important for us to get back on track,” Cornetto said. “We haven’t been playing our best lately, but I feel like we’re climbing the mountain more rather than sitting on a plateau. We have to keep getting better every week.”

Marion Center will look to keep the momentum rolling when it hosts United next week, and the Colts will continue to search for their second victory of the season on the road against Penns Manor.