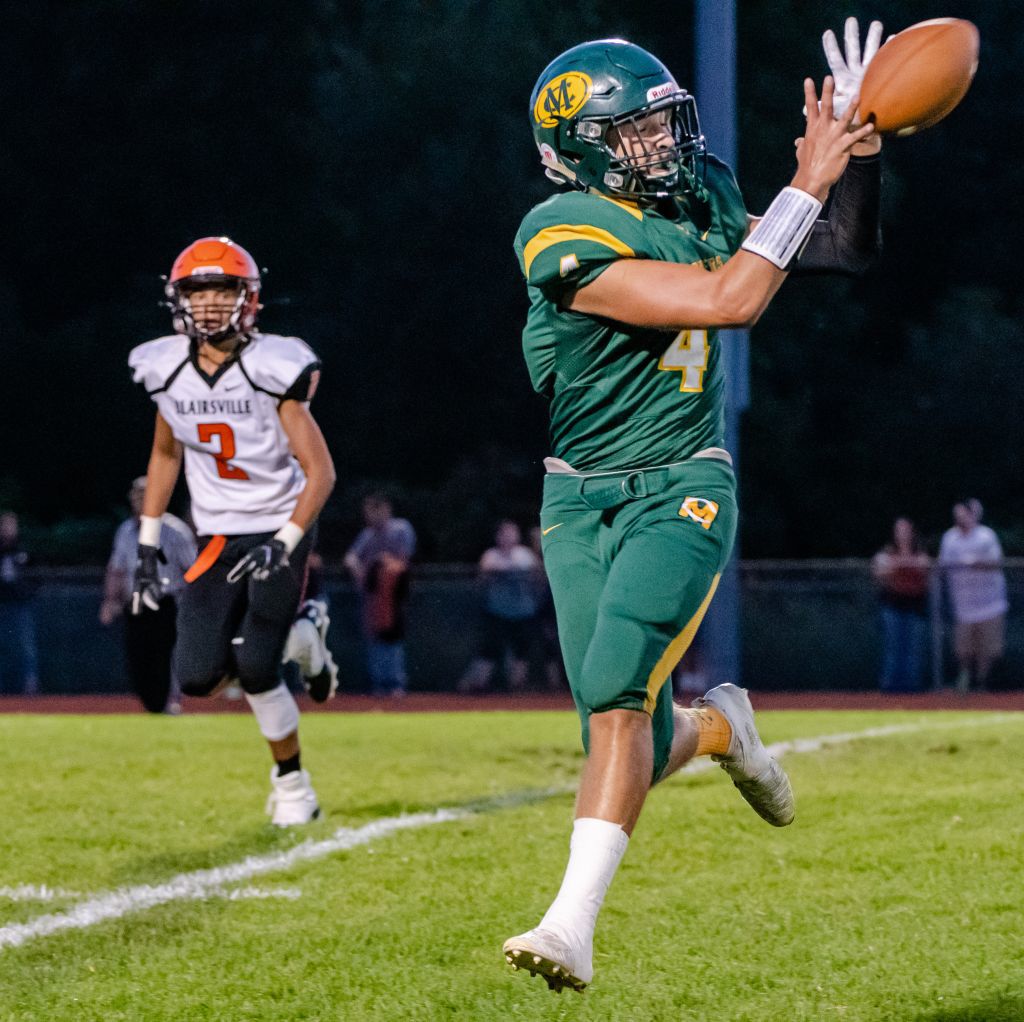 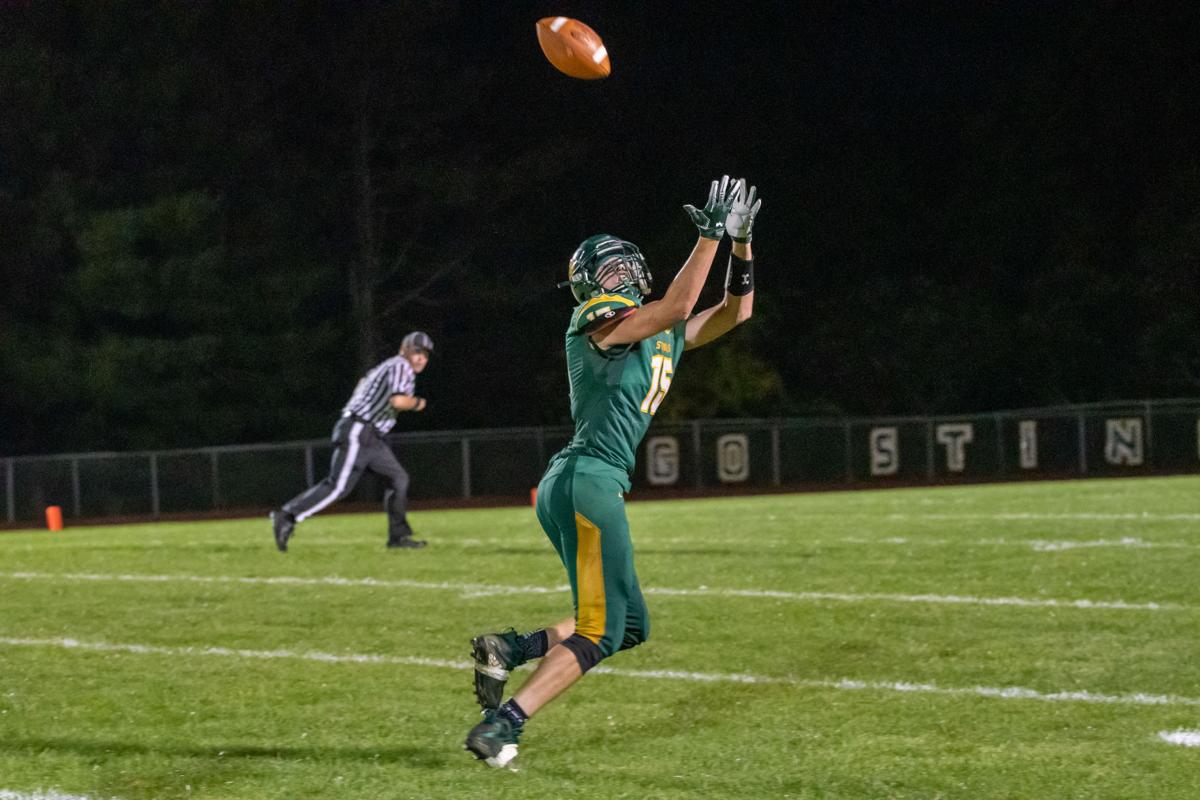 MARION CENTER — The lights went out at John R. Malino Stadium at exactly 9 p.m. between the third and fourth quarters, delaying the Heritage Conference game between the Marion Center Stingers and the Blairsville Bobcats for 20 minutes.

When play resumed, Marion Center finished its 45-6 thumping of Blairsville.

The lighting issue had nothing to do with the outcome, but it was the third time in the last 12 Blairsville games that the field went dark on the Bobcats. The first two times didn’t turn out any better for Blairsville in a 22-20 loss at Purchase Line last season and a 16-14 home loss to Penns Manor to open this season.

But at least those games were closer and winnable. This one wasn’t. The Stingers saw to that by knocking Blairsville’s lights out much earlier than the fourth quarter. Marion Center scored on four of its first five possessions, while allowing the Bobcats just one first down in that same time frame.

In those five possessions, Marion Center converted four of six third downs and both of two fourth-down situations.

“I’m at a loss for words right now,” Blairsville coach Rick Artley said. “I mean, we had them third-and-long and fourth-and-long probably eight to 10 times tonight and couldn’t make a play at that point. Against any type of team, you’re not going to have a shot, but against a good team, you have zero chance.

“Honestly, that quarterback at times wouldn’t have been touched. If it had been a tag football game, we wouldn’t have tagged him. He ran around sometimes for five or six seconds back there. If you can’t get to him, sooner or later someone is going to be open down field.”

Four of the early conversions resulted from throws made by elusive quarterback Ty Ryen. Two more were picked up on runs by Marion Center running back Garet Wells.

Wells rushed for 135 yards and two touchdowns and caught four passes for 42 yards and another touchdown. His two rushing scores left him two short of reclaiming a school record for the family.

Wells’ father, Jason Wells, set the single-season school record for rushing touchdowns with 14 in the 1990s. Luke Sitosky claimed the record with 16 in 2000. With a 3-yard touchdown in the second quarter and a 24-yard touchdown in the third quarter, Garet Wells brought his season total to 15. But after the game he downplayed the impending achievement.

“Records really don’t mean (anything),” Wells said. “It’s a team effort. As long as we get out and win every week, that’s the only thing that matters.”

Marion Center improved to 5-1 by outrushing Blairsville 318-0 and adding 166 passing yards by Ryen for balance. Ryen completed 13 of 17 passes, and he scored on a 2-yard dive to cap a nine-play, game-opening drive. Jocilyn Thompson added a PAT kick and the Stingers had all the points they would need.

“I’m very pleased,” Marion Center coach Adam Rising said. “I feel this was the first football game (in which) we came out full-steam ahead and played football early. Hats off to our defense, which really got at it, swarming to the football.

“I was very proud from an offensive standpoint. We’ve been challenging the guys all week. We’ve been stuck in the mud a little bit, especially early in the game, so for us to come out early and for some guys to really step up and establish the run game, but also be well-balanced with throwing the football, was very positive for us.”

Wells caught a 14-yard pass in the flat and made Blairsville defenders Hank Skirboll and Jesse Klingensmith miss on his way to the end zone for Marion Center’s second score.

The Stingers lost their third possession on a fumble early in the second quarter, but the setback was temporary. Blairsville lost 3 yards on the next possession and punted for a third time. The Stingers went back to work and scored on eight plays, covering 77 yards and scoring on a 5-yard pass to Justin Peterson.

Clayton Coble, who was crowned homecoming king at halftime, intercepted an overthrow by quarterback Zak Artley to end Blairsville’s next possession. The Stingers cashed in three plays later with Wells’ first touchdown, and Marion Center led 27-0 with 5:15 remaining in the first half.

Wells’ second touchdown put the Stingers up 33-0 at the 8:22 mark of the third quarter. The 24-yard scamper converted another fourth down for the Stingers.

Gaven Palko scored on a 12-yard reverse to cap off the Stingers’ second possession of the second half, putting Marion Center ahead 39-0 and triggering the mercy rule.

Blairsville crossed the 50-yard line for only the third time on the final possession of the third quarter. The Bobcats drove 11 plays from their own 43 to the Marion Center 1 when time ran out in the third quarter and the lights went out as the officials were walking the ball to the other end of the field.

When play resumed, Blairsville tailback Sincere McFarlin took a pitch to the left for the 1-yard score.

McFarlin was held to just 2 yards on 13 carries. Five of those carries resulted in losses.

Zak Artley ended up with 25 passing attempts and completed just nine for 120 yards.