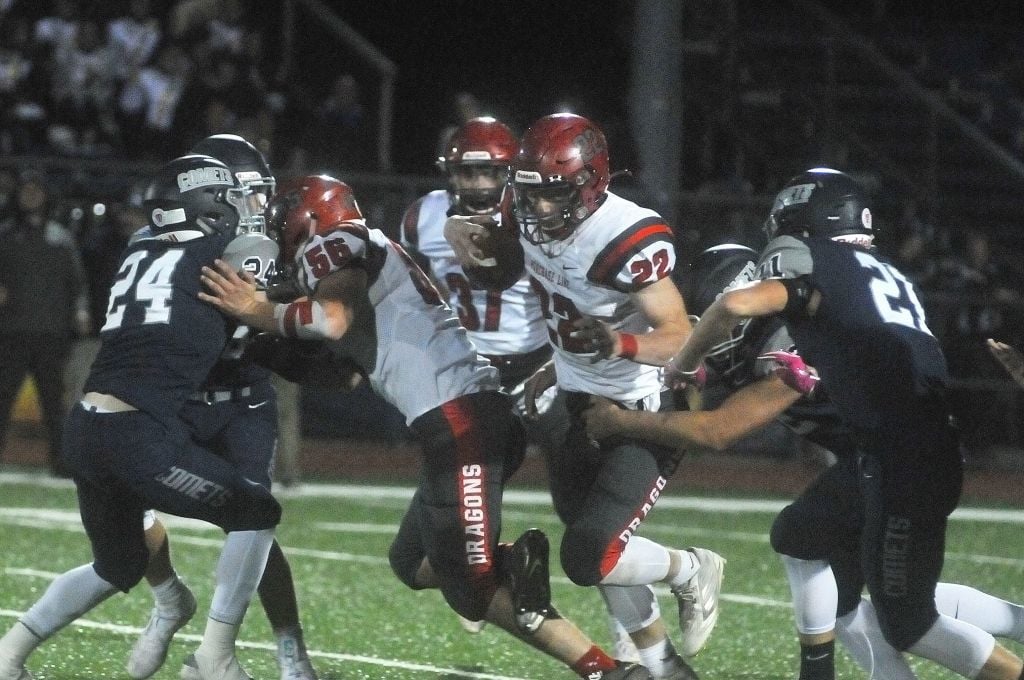 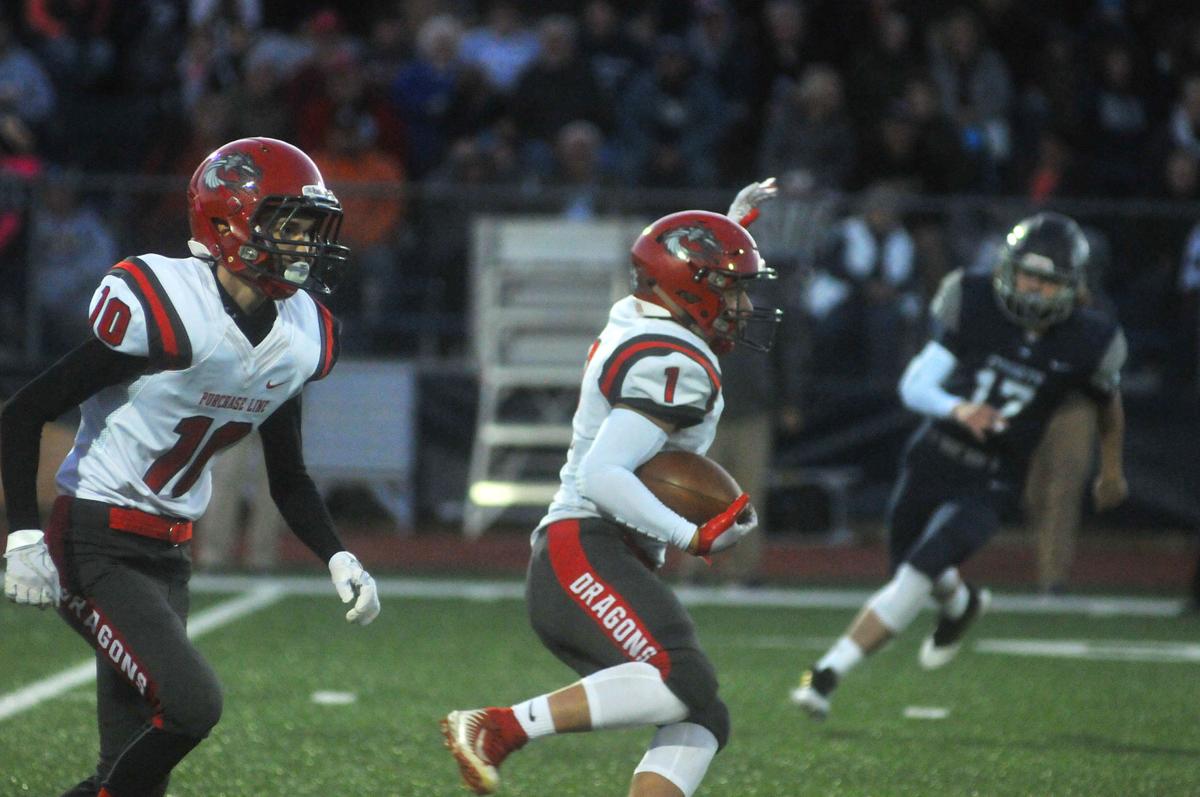 KENWOOD — Josh Syster and the Purchase Line Red Dragons had a night to remember.

Syster rushed for 258 yards and five touchdowns, and Purchase Line rolled for 421 yards on the ground and pulled away from Penns Manor in the fourth quarter for a 36-14 victory in a Heritage Conference football game Friday night.

“We went right at them,” Red Dragons coach Matt Falisec said. “As hard as Josh ran, the line blocked awesome tonight. Cullen was doing a great job on the (isolations), and the kids battled back.”

The Red Dragons received the kickoff to start the game, and each team’s first possession ended with a turnover on downs. That left Purchase Line crammed against its end zone and set up good field position following a punt, but Penns Manor against turned the ball over on downs.

The Red Dragons’ offense then proceeded to take flight. Kyle Day’s 40-yard run from the Comets’ 44-yard line put Purchase Line in scoring position. Syster finished the job with a 2-yard run, putting his team ahead of the Comets 6-0 midway through the second quarter.

Penns Manor fumbled away two of its next three series, and Purchase Line gave away one, leaving the score at 6-0 at halftime.

In the second half, Penns Manor did nothing on its first possession.

Purchase Line had no such problem. Syster broke free on the next play from scrimmage, going 74 yards for his secnd touchdown and a 12-0 lead. Syster ran for the two-point conversion to make it 14-0.

Trailing by two scores, the Comets needed to get creative. Penns Manor executed one of its patented catch-and-lateral plays, from Max Hill to his brother Austin to Dimitri Lieb. The play netted 32 yards inside the Purchase Line 20. Lieb covered the final 12 yards for his first touchdown of the season, and the failed two-point attempt left the comets trailing 14-6.

Purchase Line executed a flawless response to Penns Manor’s score. Following a 24-yard run by Day, Jacob Barnett hooked up with Syster on a 40-yard scoring strike, stretching the lead to 22-6 after the two-point conversion.

Down two scores, Penns Manor went to the passing game, with Max Hill connecting with Lieb for 35 yards. Three plays later, the Comets faced fourth-and-8 at Purchase Line’s 18-yard line. The quarterback evaded heavy pressure and found his brother, who was double-covered in the end zone but made an impressive catch. Lieb scored on the two-point run, making the deficit eight points at 22-14.

Once more, Syster carried the workload for the Red Dragons. In six carries, he ran for 69 yards and eventually scored on an 8-yard run with just over seven minutes left in the game. Day’s run on the two-point attempt was successful, restoring the two-possession advantage at 30-14.

After holding Penns Manor on its next possession, the Red Dragons put the game away when Syster dashed 51 yards for a touchdown with six minutes left.

“We started off slow in the first half,” Syster said. “But then in the second half, my linemen executed just how they should have, and we scored points.”

“Syster had some big runs, and that was a killer,” Penns Manor coach Bill Packer said. “But I thought we improved defensively. We played right up to the end with them, and if weren’t for those couple big plays, we would have been right in it.”

While Purchase Line improved to 4-3, Penns Manor fell to 2-5 and needs a late push to extend its consecutive District 6 playoff appearances to 13.

“I saw some emotions tonight, and it’s the first time I’ve seen that in a while,” Packer said. “When I talked to the kids afterward, I said, ‘You guys improved and played a good game.’ But we have to stop the mistakes, and if we get enough big plays, then we’ll be all right.”