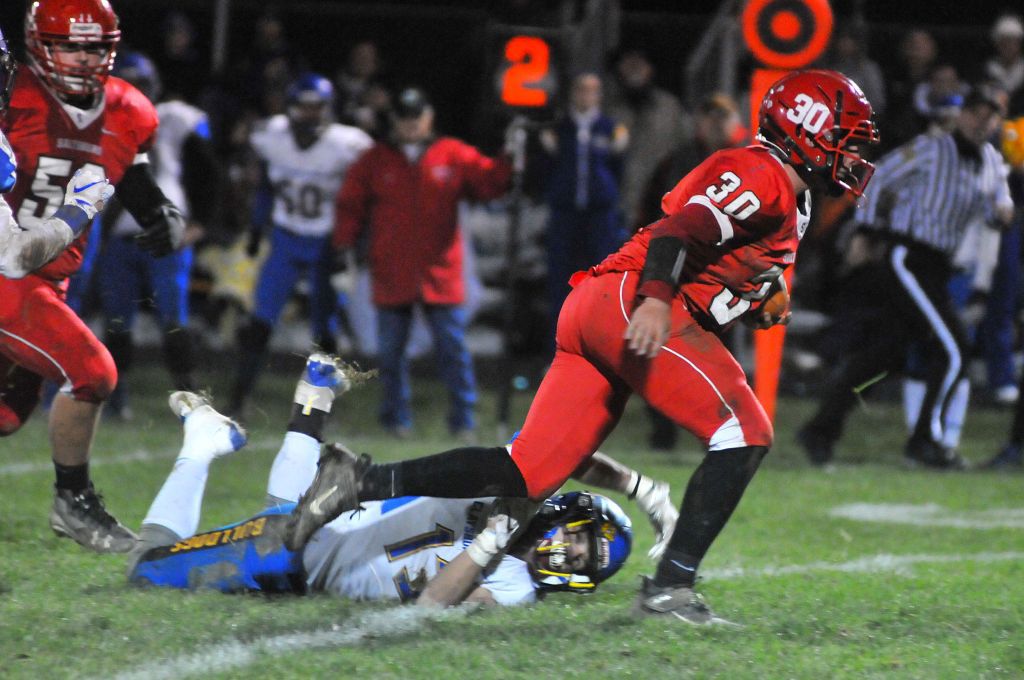 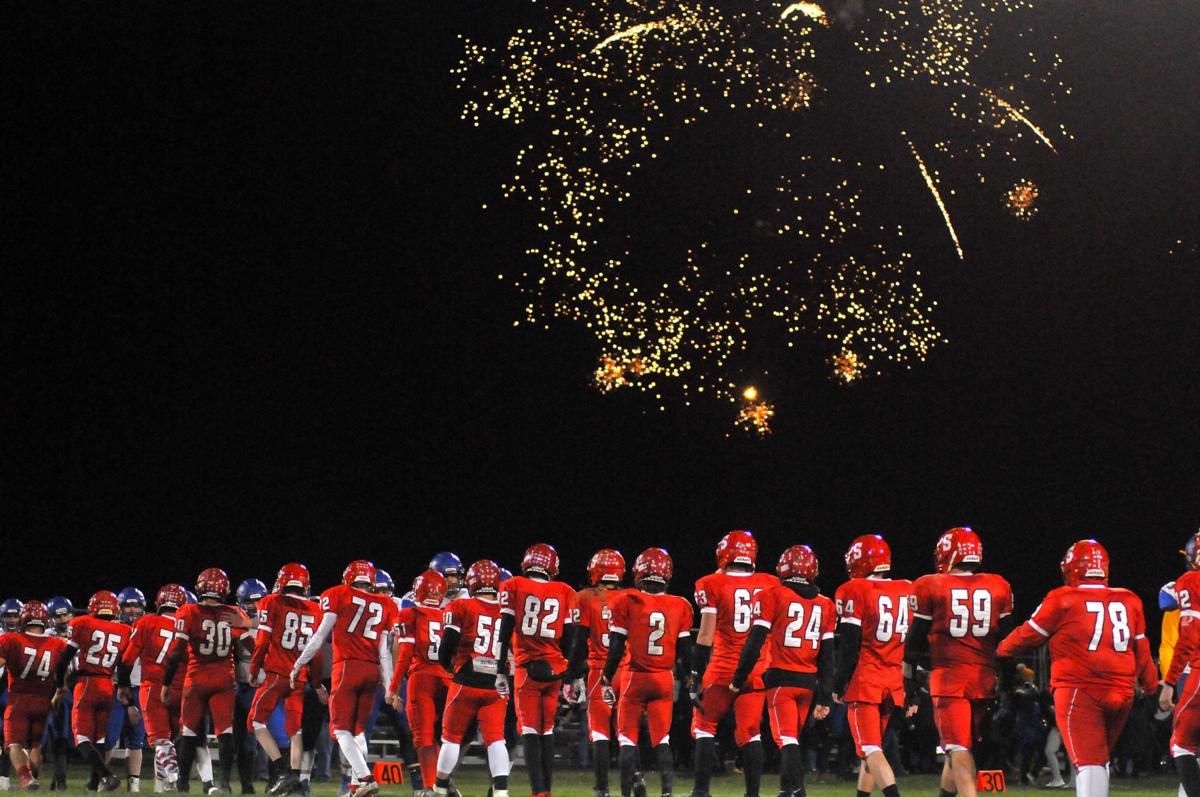 Saltsburg celebrates their win as fans set off fireworks.

SALTSBURG — The Saltsburg Trojans made school history on Saturday night with their first district playoff win on their home field with a 39-14 victory over Claysburg-Kimmel in the District 6 Class 1A quarterfinals.

Saltsburg, the No. 4 seed, advanced to a semifinal showdown with No. 1 Bishop Guilfoyle next weekend.

Appropriately, running back Angelo Bartolini rushed for 203 yards and three touchdowns against Claysburg-Kimmel.

“Angelo is one of our hardest-working kids and I could not be prouder of what he did tonight,” Saltsburg coach Mike Leasure said. “Our offensive line did very well up front. All of those guys blocked well. To have a 200-yard rusher against that defense, they’re a good physical defense, so I’m very proud of everyone tonight.”

Bartolini’s performance came almost 28 years to the day after his father, Mike, quarterbacked the Trojans to a playoff win against the same school. Saltsburg then defeated Guilfoyle the next week to win the district championship.

Saltsburg won that first game against Claysburg-Kimmel, 37-8, and the Bulldogs didn’t score until the fourth quarter. This time, Saltsburg didn’t begin to dominate until late in the second quarter.

Claysburg-Kimmel scored on its first possession on a 12-yard run by running back Seth Mussellman. Saltsburg answered with less than a minute remaining in the first quarter when quarterback Josh Gibbons hit wide receiver Tristan Roessler with a 4-yard pass in the corner of the end zone.

Claysburg-Kimmel came back quickly, scoring on two plays to take back the lead for the last time with just 36 seconds left in the quarter. A 32-yard run by Kobe Harr and his two-point conversion run gave Claysburg-Kimmel a 14-7 advantage.

Both teams struggled to make a stop on defense, and Saltsburg scored six plays into the second quarter on a 2-yard run by Bartolini. Colin Roessler’s kick was wide, so the Trojans still trailed, 14-13.

Claysburg-Kimmel seemed well on its way to answering again. The Bulldogs advanced to the Saltsburg 14 on 13 plays, but a host of Trojans defenders stopped Preston Bush for a 1-yard loss on fourth-and-2.

“That was a big play for us,” Leasure said. “You know, our coaches made some adjustments that we needed and slowed their run down a little bit. We played some man coverage and our D-backs did a great job.

“It took us a little bit into that second quarter before we really started to play. We were physical. We turned it on, so I’m really proud of the kids tonight.”

Saltsburg dominated from that point, taking the lead just before halftime. The Bulldogs appeared poised to make their own fourth-down stop, but Saltsburg converted a fourth-and-4 with a halfback option pass from Gino Bartolini to Nathan Slapinski for a 27-yard touchdown.

The second half belonged to Saltsburg. The Trojans held the Bulldogs to minus-3 rushing yards and just 38 passing yards. Claysburg-Kimmel gained only four first downs, including two by penalty.

On the offensive side, Angelo Bartolini gained 159 rushing yards in the last two quarters, including 7 yards on the team’s last play.

“Our linemen were making great blocks tonight,” Angelo Bartolini said. “I had blockers out in front of me, I made some cuts, get down the field and end up with a lot more yards than I usually get.”

Angelo Bartolini broke through the middle of the defense for a 55-yard touchdown run seven minutes into the third quarter, and Tristan Roessler caught a second touchdown pass of 11 yards later in the quarter.

With a 32-14 lead, Saltsburg ended Claysburg-Kimmel’s last hope at a comeback when it stopped running back Zach Claycomb for a 13-yard receiving gain on fourth-and-14 one minute into the fourth quarter.

Angelo Bartolini capped the scoring with a 4-yard run late in the fourth quarter.