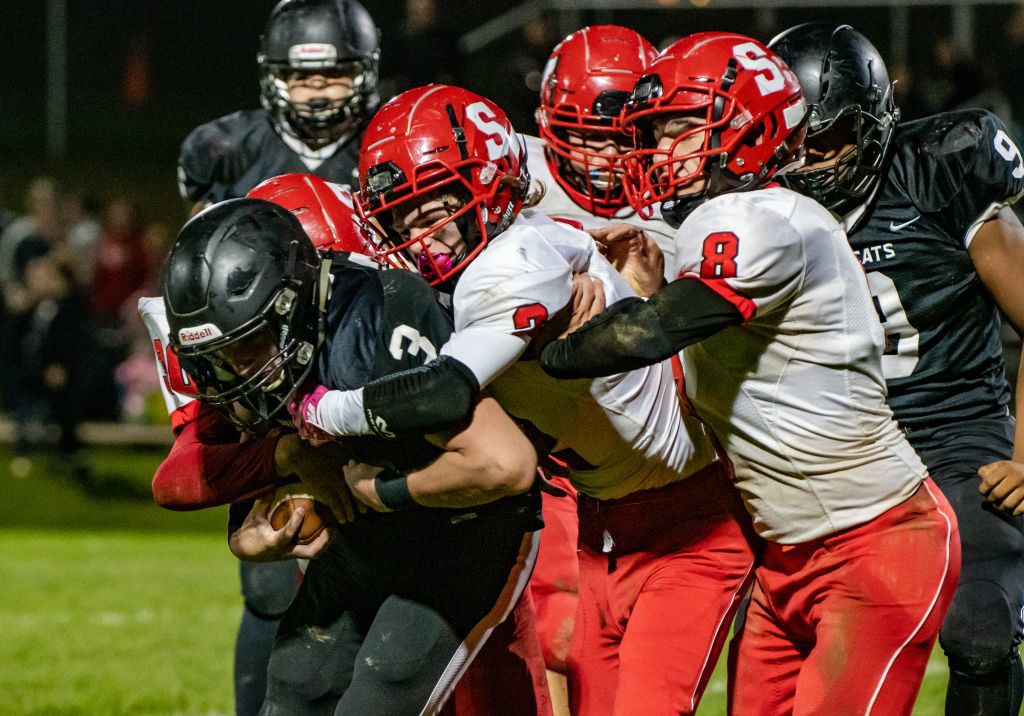 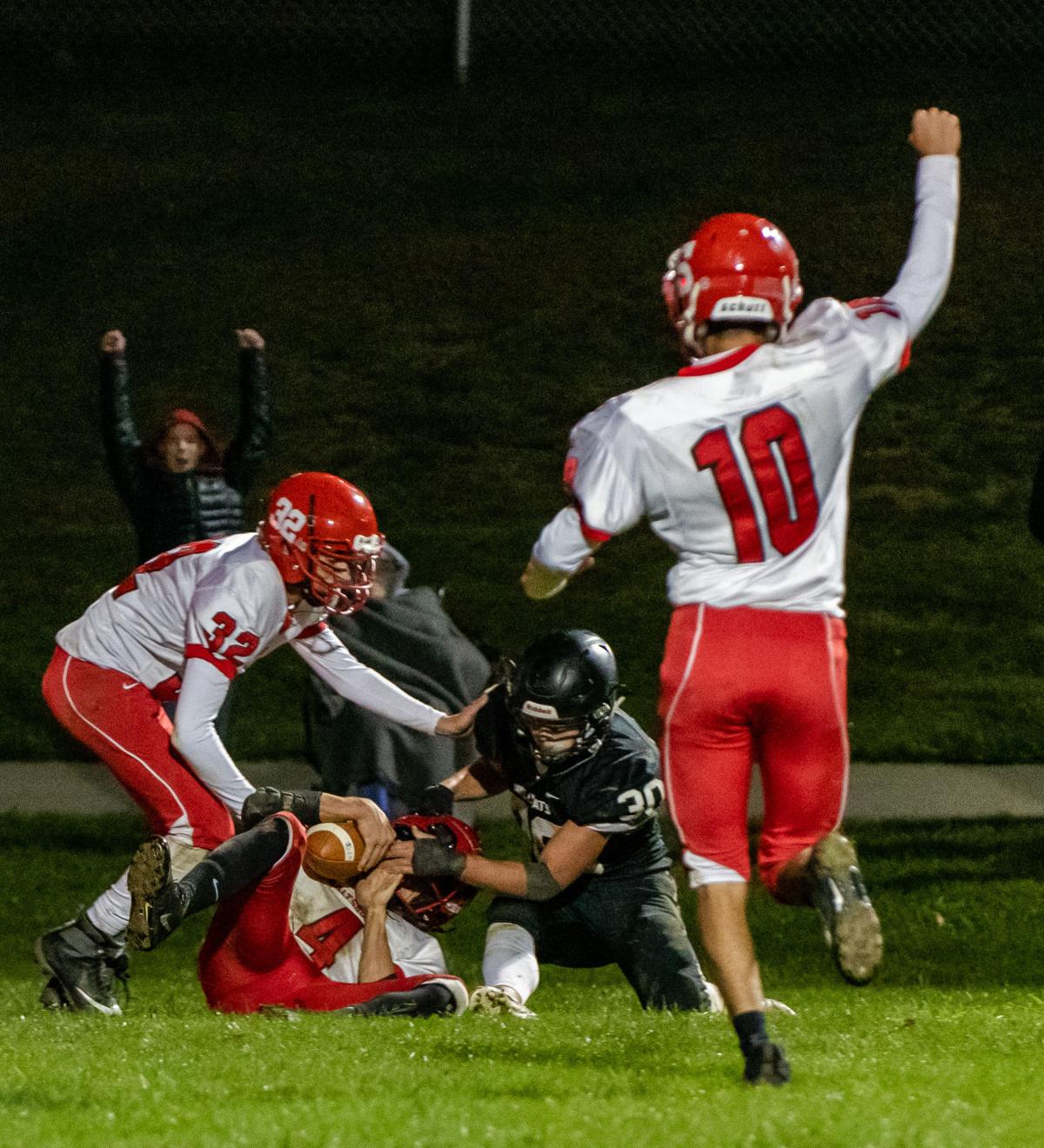 HOMER CITY — Saltsburg took the field Friday with the hopes of picking up a signature win for its on-the-rebound program. The Trojans hadn’t beaten Homer-Center in a while and were ready to do whatever they needed to take down the Wildcats on their home turf.

On a night full of adversity, Saltsburg used all aspects of its game to prevail and score a 27-26 victory over Homer-Center in a memorable battle at Memorial Field.

The Trojans, facing a 14-0 deficit early in the second quarter, fought back with a big second half to take the lead and hold off the resilient Wildcats.

Homer-Center scored on a 28-yard touchdown pass from Ben Schmidt to Drew Kochman with 1:13 left in the second quarter to take a 26-7 lead and looked in line to roll to its sixth straight win. But Saltsburg wasn’t ready to throw in the towel, and Josh Gibbons hit Cade Grguric on a 19-yard touchdown pass with eight seconds remaining before halftime to pull within 26-14 entering the break.

“It was a nice win tonight,” Saltsburg coach Mike Leasure said. “These kids — I can’t say enough about this group of kids. We were struggling in that first half, but in the second half they really came out and made adjustments.”

On the first possession of the second half, a bad snap on a punt attempt forced the Wildcats to turn the ball over on downs at their own 32-yard line. Two plays later, the Trojans scored on an 18-yard touchdown pass from Gibbons to Nathan Slapinski to get within six, 26-20, after a missed extra point.

On its next drive, Homer-Center fumbled the ball away at the Saltsburg 2, and the Trojans responded with a 95-yard scoring drive fueled by Angelo Bartolin’s 80-yard run and capped by an 8-yard touchdown  pass from Gibbons to Grguric with 1:13 left in the third to tie the game. Colin Roessler booted the tiebreaking extra point.

“We had our opportunities, but we failed to execute,” Schmidt said. “We made too many mistakes, turned the ball over and they were just the better team tonight.

“They just got on a roll, and once they get momentum, they’re a hard team to stop. They’re scrappy and they never quit.”

Homer-Center’s next — and final — four possessions featured the Trojans getting pressure on Schmidt, which resulted in four straight interceptions.

“We didn’t handle their pressure very well at times, and that put him under the gun,” Homer-Center coach Greg Page said. “We can look at all the interceptions, but we have to be able to do something where we don’t have to get rid of the ball in a second. Those are some things that hurt us. They have an interesting defensive scheme, so sometimes you don’t know where everybody’s coming from. They’re going to put the pressure on and make you get the ball out of your hands quick. There were times we made some great reads and made some great adjustments and hit some nice pass plays, but again, when we needed to be consistent in certain situations and get that go-ahead score, we weren’t able to do it.”

The Wildcats were able to get a couple more chances when the Trojans fumbled the ball away with 7:53 left in the game and when Gibbons was picked off with 3:21 left, but Homer-Center struggled to get any momentum back.

“We weren’t moving the ball well, and Homer had a groove with their offense,” Leasure said of the first half. “They were moving the ball. Defensively, though, we made some big-time adjustments in that second half. Coach (Glenn) Richards did a good job with the defense to help slow their offense down a little bit. Rocco Bartolini had a couple big interceptions, Payton Fischer played a heck of a game on the D-line, so I’m just proud of our efforts tonight. Proud of these kids. This was a tough place to come up here and win, and our kids were able to handle the adversity.”

Homer-Center lost receiver/defensive back Cobe Daugherty to injury in the first half and he never returned, and the Wildcats then lost lineman/linebacker Brock Houser in the second half to a serious leg injury.

“You have to give Saltsburg a lot of credit,” Page said. “They came in, they played hard, they have a veteran team and they made plays. A couple of things were quirky, but that’s what good football teams do. They were able to take advantage of some things and seize the momentum.”

After the Wildcats jumped out to a 14-0 lead on a 6-yard run by Noah Henry in the first quarter and a 1-yard run in the second by Schmidt that was set up by an 85-yard pass from Schmidt to Daugherty, Gibbons took some of the momentum away by scampering 75 yards for a touchdown on the ensuing kickoff.

Homer-Center got on the board again with a 21-yard touchdown pass from Schmidt to Travis Mock with 4:33 left in the second quarter to take a 20-7 advantage.

The Wildcats, who entered the game with a plus-3 turnover margin, turned it over five times Friday night.

“We did (slow him down) at times, but he’s such a great player. It’s tough to contain him all game,” Leasure said. “We thought we’d give up about this many points. We knew we had to score, and we were able to score enough tonight to win.”

Angelo Bartolini led the Trojans with 150 yards on 12 carries, with 124 of those yards in the second half. Gibbons went 16-for-31 for 250 yards and the three touchdown passes.

Both teams sit at 5-2 after a game that had District 6 Class 1A playoff ranking implications.

With its win over Marion Center, another 5-2 team, unbeaten Ligonier Valley clinched its fourth straight Heritage Conference championship, putting the other teams in a race for second place.

Homer-Center will look to bounce back at rival Blairsville next week. Page feels confident his team will rally after a funky loss full of injuries and turnovers and get back on track.

“Your two choices are you can fold it, or you can come back Monday with a renewed purpose and realize now with a loss maybe we do need to refocus things a little bit more than what we have,” Page said. “When you’re winning, sometimes you get blinded by some things, and you just let it go or you’re just kind of cruising along and people telling you how good you are. At times we are a good football team, and at times we’re very inconsistent, and Saltsburg made us see that tonight. My particular feeling is we’re going to see the side of our kids that’s going to want to bounce back, especially when you’re going to go down and play your main rival next week.”

Saltsburg hopes to carry its momentum into West Shamokin, where it can secure its first winning season since 1996.

“This group of seniors, our four years of being here, we’ve never beaten this team,” Gibbons said of Homer-Center. “So to come out here on their field and do that to them — especially up here at Homer-Center. This is a tough place to play. They have a great crowd out here and they played a heck of a game. Our guys stuck in there, had a rough first half but came out in the second half and made stuff happen.”