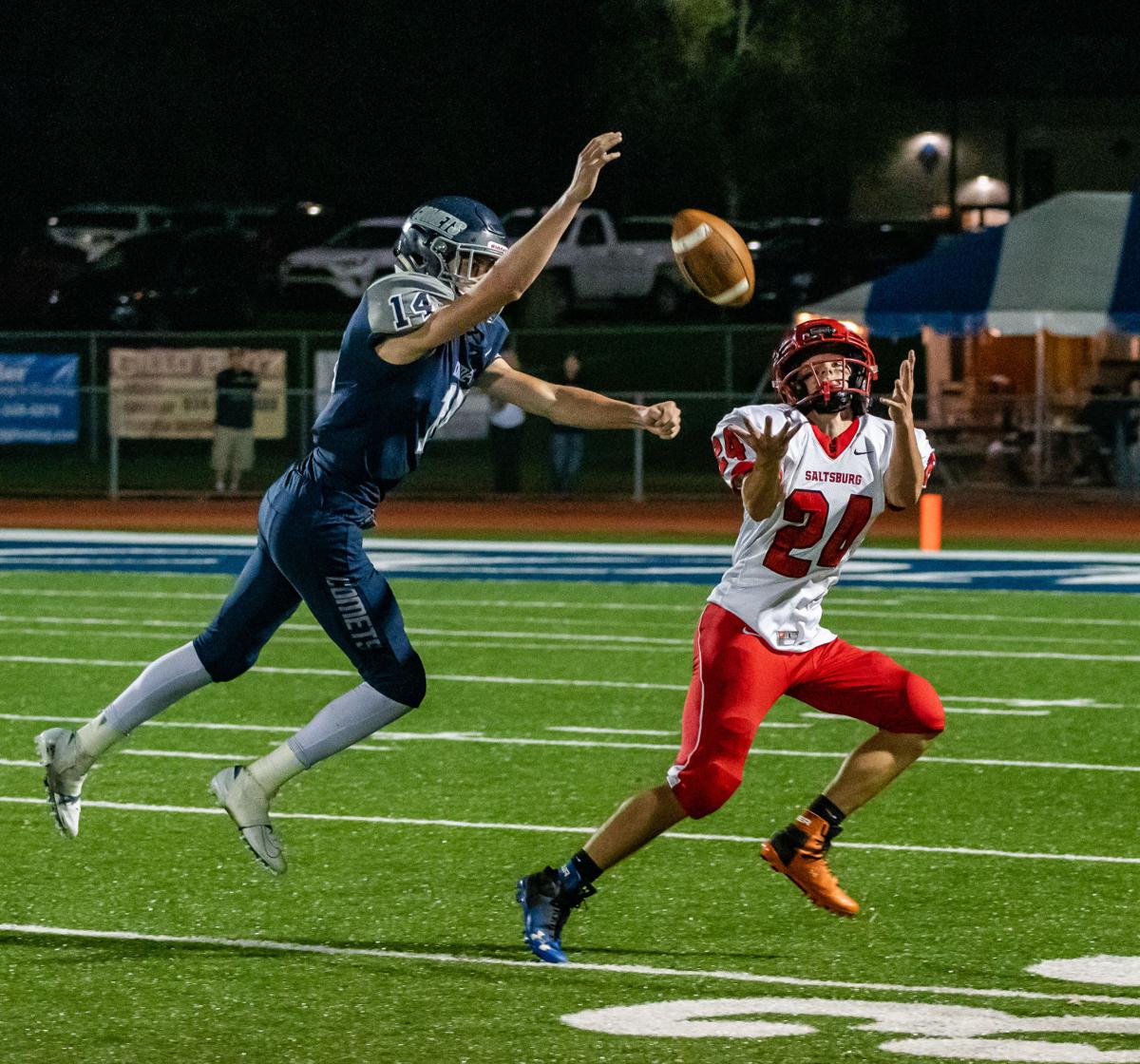 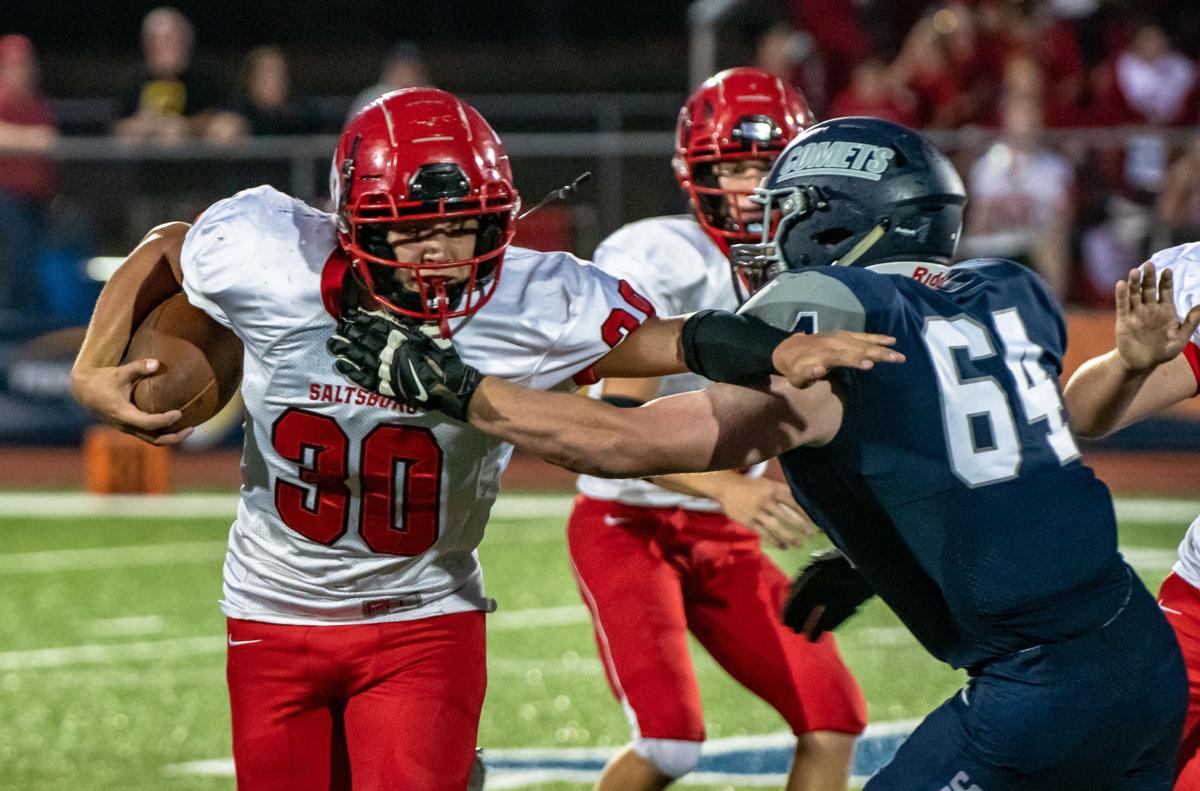 Josh Gibbons and Nathan Slapinski supplied the splash plays in the first half, and Saltsburg’s defense had five takeaways for the game. This proved to be too much for Penns Manor to overcome as the Trojans came away with a 34-20 victory in a Heritage Conference football game on the Comets’ homecoming night.

Gibbons threw for 224 yards on 10 completions, with Slapinski on the receiving end for almost half of it. As Penns Manor experienced major failures on offense and defense in the second half, the Trojans ran away from the Comets to improve to 3-2.

“The kids played a heck of a second half,” Trojans coach Mike Leasure said. “They played a tough game, and these kids are great kids. They get after it, and we had a heck of a week in practice, and they wanted to come back on this turf. I’m proud of what they did against this Penns Manor team.”

The Trojans elected to receive the opening kickoff. On their first set of downs, Saltsburg was faced with third-and-3 from the 39-yard line. For his first completion of the night, Gibbons found an uncovered Slapinski for a 61-yard touchdown. The score was 6-0 after the extra point attempt was unsuccessful.

Resembling their strategy from Week 3 against United, the Comets were dedicated to the rushing attack on their opening possession. They were eventually forced to go for the conversion on fourth-and-8 in positive territory. Max Hill’s first pass was intercepted by Gibbons, who returned it 10 yards but fumbled, returning possession to Penns Manor. The Comets took full advantage of Gibbons’ mistake and scored a 7-yard screen pass to Dimitri Lieb. The failed extra point attempt made the score 6-6 late in the opening quarter.

Penns Manor held the Trojans to a three-and-out and began their next series at Penns Manor’s 14-yard line. In only six plays, their drive consisted of two offensive penalties and an 8-yard sack, and was punctuated with an interception by David Stuller at midfield. Despite great field position, the Trojans’ following possession fell flat after Lieb intercepted Gibbons’ pass in the end zone for a touchback.

Both offenses, while limiting the turnovers, remained silenced throughout the rest of the second quarter, but in the waning moments of the half, the Trojans caught fire. A 44-yard catch-and-run by Slapinski was enough to position Saltsburg in goal-to-go territory. Slapinski scored two plays later on a 10-yard run, putting the Trojans ahead 13-6 at halftime.

It took only two plays for the Comets to strike back at the beginning of the second half when Kevin Baum pushed through traffic and sped past Saltsburg’s secondary for a 63-yard score. Following the touchdown, Penns Manor aimed to take the lead by faking an extra point, but the unfazed Trojans forced Hill’s pass to go incomplete to protect a 13-12 advantage.

After a short kick and a 9-yard return by Rocco Bartolini, the Trojans were set up in great field position at midfield. They never faced a third-down situation as they worked downfield, and a 10-yard run by Angelo Bartolini ended the drive with a touchdown. A successful extra point kick by Colin Roessler put Saltsburg ahead 20-12.

After Saltsburg’s touchdown, the Comets tried to convert on fourth-and-4. On the play, the Trojans blitzed Hill, who desperately tried to evade the pressure before getting sacked 14 yards behind the line of scrimmage.

Saltsburg took over at the Penns Manor 45-yard line. The Comets allowed only 2 yards on the first three plays to force fourth-and-8, but the Trojans responded with a devastating blow when Gibbons found Gino Bartolini for a 43-yard touchdown.

Looking at a 15-point deficit, the Comets were in serious need of a touchdown. Their methodical approach to the next series appeared promising. They reached the Trojans’ 35-yard line, but after an incompletion on third-and-5, Hill threw his third interception of the night, this one going to defensive lineman Payton Fischer near the end of the third quarter. Saltsburg’s offense proceeded to deliver the final blow on a six-play drive capped by Gino Bartolini’s 3-yard run that made it 34-12.

Penns Manor had no choice but to attempt a fake punt on fourth-and-22 inside its territory. Lieb picked up 7 yards before getting stopped well behind the first-down marker, allowing Saltsburg to retake possession. The Trojans punted back to Penns Manor, but a fumble on the drive’s first play put the Trojans’ offense back on the field at the 5-yard line.

Because of numerous penalties and poorly executed plays, a surefire scoring opportunity for Saltsburg led to a turnover on downs back to midfield.

Penns Manor’s Mark Bagley broke loose for 35 yards and then went 9 yards for at touchdown. Ashton Courvina caught a two-point pass that cut the deficit to two touchdowns at 34-20 with two minutes remaining. Though the Comets recovered their onside kick, their effort to close the gap ended when Gino Bartolini intercepted Hill’s pass.

“We’ve talked about how it’s big to be a team and come together,” Gibbons said. “Even in those situations when I throw a pick, these guys are always there. They pick me up and get me back on my feet.”

Comets coach Bill Packer was pleased with the success of the running game.

“I thought Kevin Baum did a tremendous job,” he said. “He made some nice cuts and put some nice moves on them, and Dimitri always runs hard, but we had a hard time running inside with (Connor) Keith. But once you get all three of them going, that makes us a lot better.”