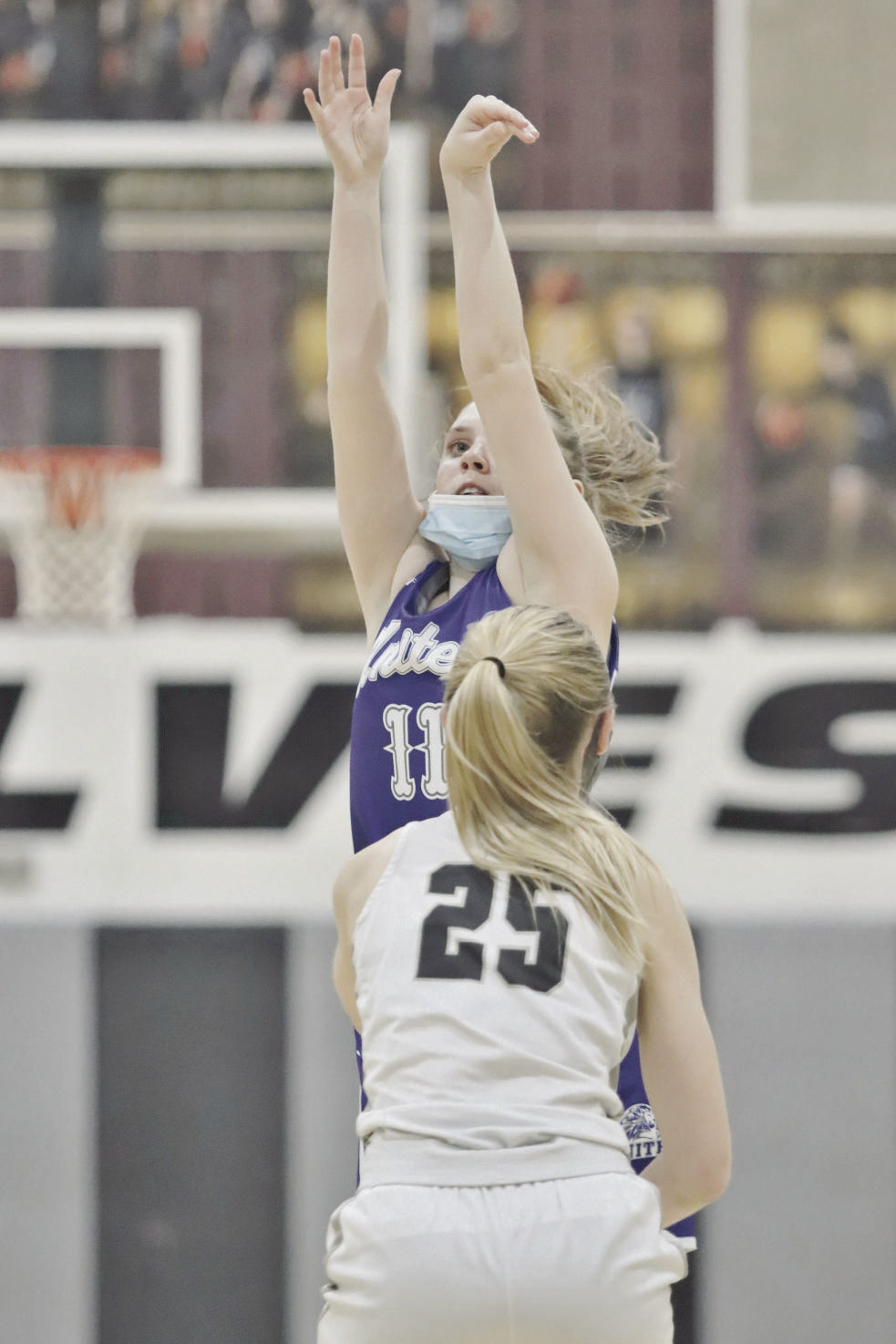 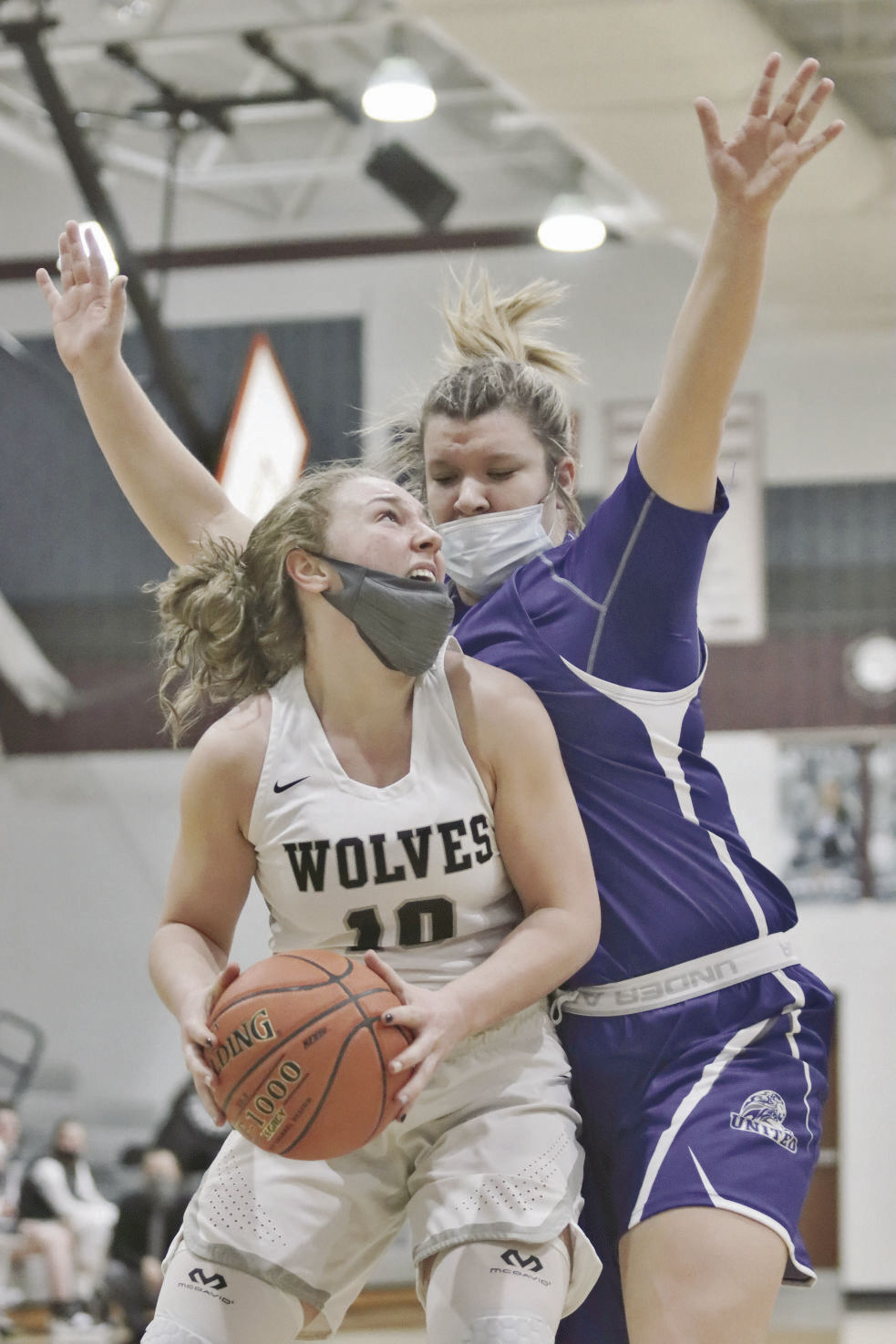 NuMINE — Once the United Lions figured out their angles, they started clicking.

The West Shamokin Wolves are still trying to figure out the Lions.

United beat West Shamokin for the second straight game, following up a blowout win at home Saturday with a narrow 42-36 decision on the Wolves’ court that shook up the top of the Heritage Conference girls’ basketball standings. West Shamokin (15-3, 13-3) fell from the top perch to No. 3, and United (14-3, 12-3) jumped to No. 2 with an outside shot at the top seed, which is now Homer-Center’s for the taking, if the Wildcats (13-4, 12-3) beat Purchase Line on Wednesday.

The Lions straightened out their offense in the second half, leaned on their rejuvenated defense and led the rebounding after halftime of a game that turned into a tale of two halves. West Shamokin held United scoreless for all but the last 1:08 of the second quarter to build a 10-point lead the Lions cut to five with a late surge.

With the possession of the ball to start the second half, United found the proper angles to feed their stalwart senior forward, Maizee Fry. Fry took a pass in the low post on the first possession, converted it into points and established her second-half presence. She scored all but one of her game-high 17 points in the second half.

Then, with the game hanging in the balance, United struck from deep when Madison Duplin drove the left baseline and spotted a wide-open Lauren Donelson at the top of the key. Donelson drained a 3-point field goal with a defender flying at her and broke a 36-36 tie inside the last four minutes. Fry and Donelson scored all but two of the Lions’ 26 points in the second half.

“It was bad angles,” United coach Paul Hall said of the Lions’ offense in the first half. “West Shamokin’s defense pushes you out further, and we had to get set up where we get better angles to get the ball to Fry. We couldn’t get her the ball in the first half. They pushed us out and made us try to pass from the outskirts, and you can’t do that. … The way to stop Fry is put a little bit of pressure on our guards. We made some adjustments at halftime with some screens and better angles and were finally able to get her the ball.”

As a result, United shot better than 50 percent in the second half. West Shamokin finished closer to 30 percent for the game and scored only 10 points in the third quarter and five in the fourth. Lily Jordan scored 13 points for West Shamokin and Lydia McIlwain had 10, but leading scorer Sophie Fusaro was held to two.

“I thought the boards was the biggest thing,” West Shamokin coach Frank Nagy said. “We were getting five on the defensive boards and four on the offensive boards in the first half, and that was able to get us our lead. The second half, we had two on the boards and threw watching and hoping someone else would do it, and that’s the disappointing thing.

“No. 2, they knocked down shots, and we didn’t. I thought we had some very good looks from some very good shooters. So that was the big difference, the boards and baskets.”

West Shamokin entered Saturday with a hold on the top seed going into Thursday’s semifinals. Then the Lions came roaring along.

Because of a postponement earlier in the season, the teams’ first meeting was moved to Saturday, setting up a back-to-back showdown with Monday night’s regularly scheduled game. United took Round 1 in a blowout, 57-27, and its victory in Round 2 created a three-way tie in which the Lions have two wins over West Shamokin, which has two wins over Homer-Center, which has two wins over United. The tiebreaker criteria is point differential, which falls in Homer-Center’s favor.

Round 3, most likely, will be playhed Thursday at United. If Homer-Center loses, however, United is first, West Shamokin second and Homer-Center third. Penns Manor (13-5, 10-5) is the fourth seed and defending champion.

Regardless, the Lions know they’re playing at home Thursday. They got there by shoring up their defense in the past week, allowing 32.8 points per game over the past four outings after getting torched for better than 60 in a four-game stretch that included an upset loss to Marion Center.

“It’s the girls,” Hall said. “They’re digging deep. The last three games, our defense, that’s what wins championships. That’s what I was always taught and that’s what I preach to them, and they’re finally coming around on defense, knowing when to help, when to switch. I think it’s finally clicking.”

Donelson has added an nice outside complement to the offense in recent outings. Her 3 in the third quarter got the Lions out of a little slump after they had fallen behind by five. Earlier, her bucket at the 5:50 mark gave United and brief 36-34 lead. All off her buckets came at the open end of West Shamokin’s gym, which is considering a bad backdrop for shooters.

“The last three games she’s stepped up,” Hall said. “When I need a clutch shot, she usually hits it for me. Her shot is so smooth, and she isn’t afraid to shoot the ball at clutch times.”

Madison Duplin also hit a big 3 in the first half, capping the second quarter that cut the last of the 10-point deficit in half. United outshot the Wolves from 3-point range, 5-2. Each team had 15 field goals, and there was a three-point difference in United’s favor in free throws.

“You’ve got to give both teams credit,” Hall said. “It was a defensive battle. I knew Coach Nagy would come out with a plan, and he did, and I’m glad we fought back and were able to come out the winner.”

West Shamokin, which won its first 12 games, is 3-3 since, with the other loss coming to Penns Manor.

“Just focus on the positives,” Nagy said in mapping his team’s approach moving forward. “I told the girls coming into today to forget about Saturday; they played exceptionally well, and we played exceptionally poor. I knew it would be closer. We were the better basketball team for a half, and they were a better basketball team for half. I know our potential, and we just have to turn the page and do it for 32 minutes now.”