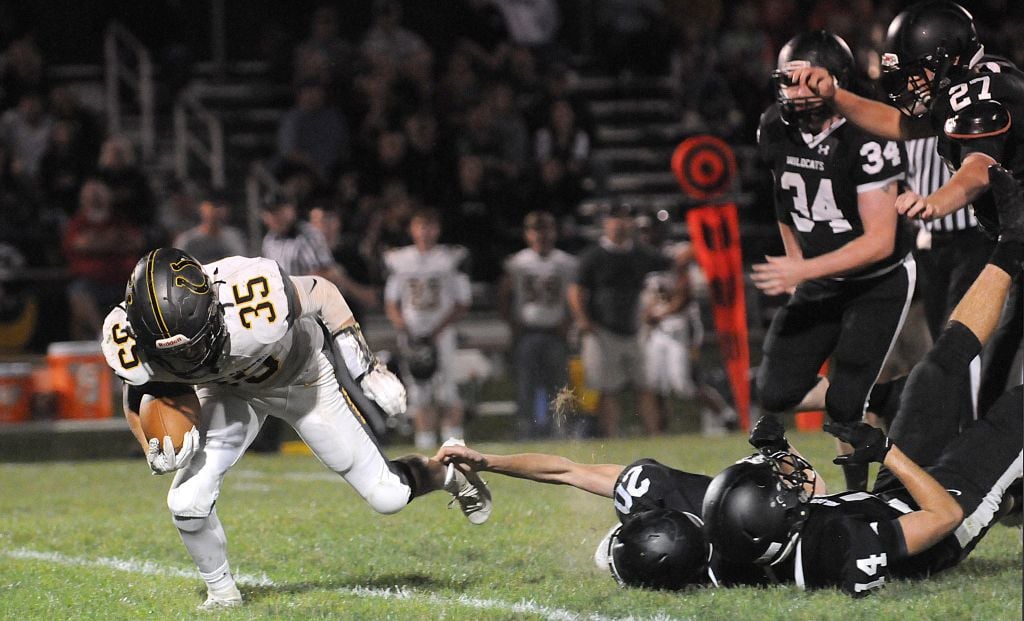 Homer-Center’s Shane McCoy (20) nipped just enough of Northern Cambria’s Adam Kopera to trip up the quarterback during the Wildcats’ victory on homecoming at Memorial Field on Friday night.

HOMER CITY — The Homer City community had more than enough to celebrate during their 2019 homecoming game against the Northern Cambria Colts.

To commemorate the 25th anniversary of Homer-Center’s 1994 District 6 championship team, several members of the squad were recognized in a powerful pregame ceremony. At halftime, Morgan Farris was crowned homecoming queen, and the 2019 Wildcats completed the trifecta with a commanding 34-6 victory over the offensively weakened Colts.

Junior split end Drew Kochman was one of the many players who helped contribute to Homer-Center’s fifth consecutive win of the season, racking up four catches for 56 yards along with one touchdown reception.

“I’m hoping we can continue this streak,” he said. “I just like helping the team and I believe that we have come together. It’s a good offense, and we’re well-rounded.”

The Colts deferred to Homer-Center after winning the coin toss. The Wildcats were unsuccessful on their opening drive and failed to convert fourth-and-2 from the Colts’ 40-yard line. Northern Cambria began the night with eight rushing plays, but Homer-Center forced a turnover on downs after they netted only 20 yards.

From near midfield, Homer-Center reclaimed possession and began with a 20-yard scramble by Ben Schmidt to convert third down. Following the conversion, a 15-yard penalty against the Colts helped move the Wildcats into the red zone, and two plays later, Schmidt connected with Cobe Daugherty for a 13-yard touchdown for the first points of the game.

After holding the Colts to a three-and-out, Homer-Center’s offense went back to work, but the Wildcats were immediately stopped in their tracks. In a battle for the ball between Adam Kopera and the opposing receiver, Kopera made a spectacular interception at the Wildcats’ 49-yard line.

However, Northern Cambria committed a turnover when Alex Pribesh recovered a fumble by Kopera and returned it inside the Colts’ 15-yard line. Daugherty finished a quick, three-play drive for Homer-Center with a 12-yard touchdown, and a successful extra point kick put the Wildcats ahead 14-0 at the beginning of the second quarter.

Another three-and-out by Northern Cambria gave Homer-Center an additional scoring opportunity. Beginning their next drive from midfield, the Wildcats opened with a 31-yard completion to Daugherty but faltered on the following set of downs and came up short on fourth-and-2.

Behind by 21, Northern Cambria needed a change of momentum, particularly regarding its passing attack. Colts quarterback Owen Prasko, playing in place of injured starter Mike Hoover for the second straight week, did not have a completion to that point. The Colts traveled no further than the 47-yard line before facing third-and-8, where Kopera and Prasko hooked up for a 7-yard completion, Northern Cambria’s first of the night. Facing fourth-and1, the Colts were penalized for a false start and needed 6 yards on fourth down. They tried a fake punt that came up short.

Reaching into their bag of tricks after Homer-Center punted, the Colts tried to catch the Wildcats off guard with a halfback option pass. Gavin Dumm’s deep throw to Isaac Noll was slightly overthrown, and the pass fell incomplete.

The Colts fumbled the ball shortly after, and the return set up Homer-Center at the Colts’ 14-yard line. Homer-Center struck on Schmidt’s pass to Kochman on the next play for a 28-0 lead in the late stages of the third quarter.

Northern Cambria started from midfield as a result of a failed onside kick by the Wildcats. With a small flicker of momentum, the Colts caught a break on third down in positive territory. Prasko found a hole between the linemen and sprinted for a 42-yard touchdown. The extra point was unsuccessful, but the touchdown allowed Northern Cambria to escape the shutout.

Starting from their 49-yard line, Homer-Center executed a slow-paced and methodical series. The drive featured a third-down conversion, but its most impactful play occurred on fourth-and-3 within the red zone. Schmidt was able to find Daugherty, who made the catch for his third receiving touchdown for a 34-6 lead early in the fourth quarter.

The next drive for Northern Cambria immediately collapsed on a tipped pass and interception by Travis Mock on the second play. He made a 23-yard return to open Homer-Center’s next series in positive territory. Both teams punted on their next possessions, and Homer-Center then spent the final six minutes killing the clock.

“It’s an offense that if we make the right reads and we spread the field out, we’re going to have opportunities to get the ball to different guys,” Wildcats coach Greg Page said. “We saw that tonight. We even hit Robinson on the nice swing pass, though we had it called back. We tried to get Noah Henry more involved, but with Drew and Cobe on the outsides and Mock on the slot, it’s a good combination.”

“We struggled,” he said. “Owen was making some bad reads and doing some things that I don’t know why he was doing it. He just needed to stay on the course and follow his progressions, but I think he was just trying to do too much. Sometimes that’s detrimental, and I think it was tonight.”