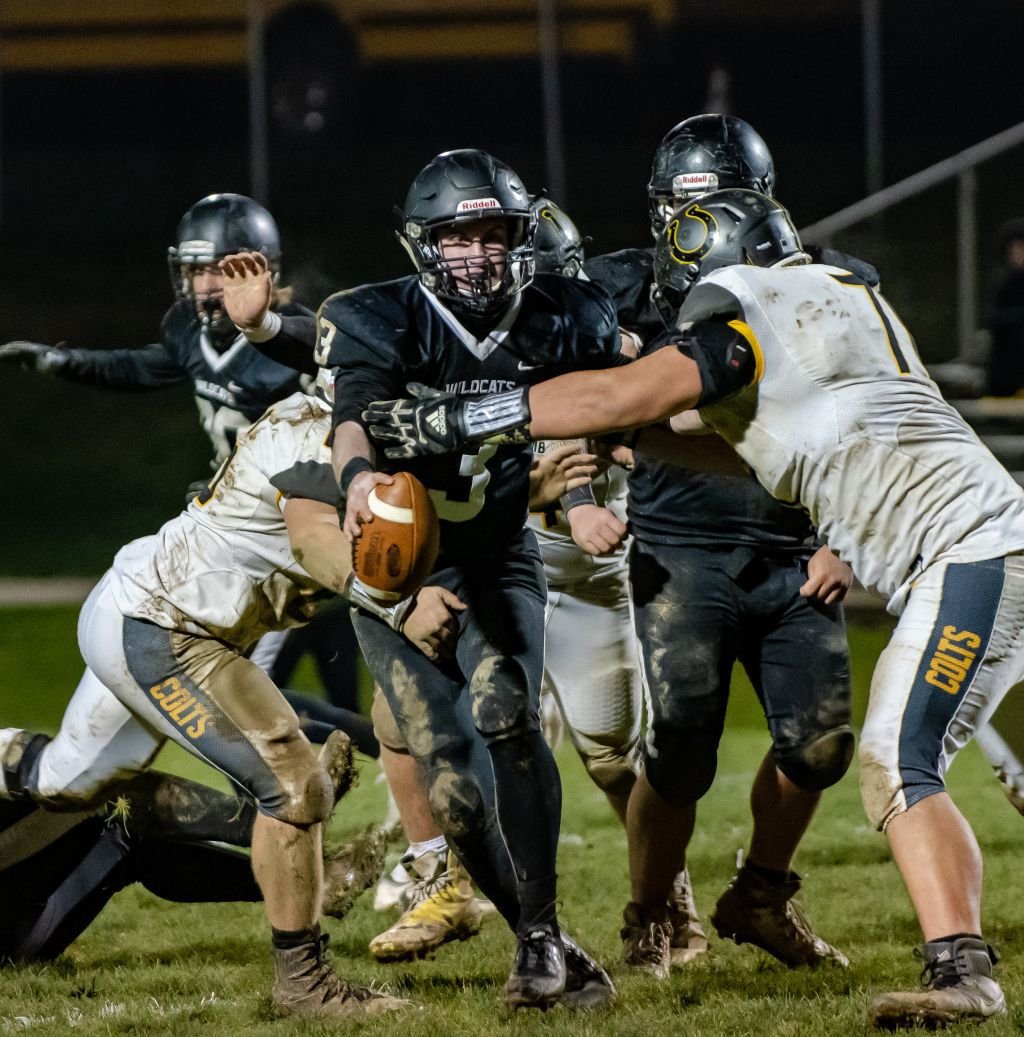 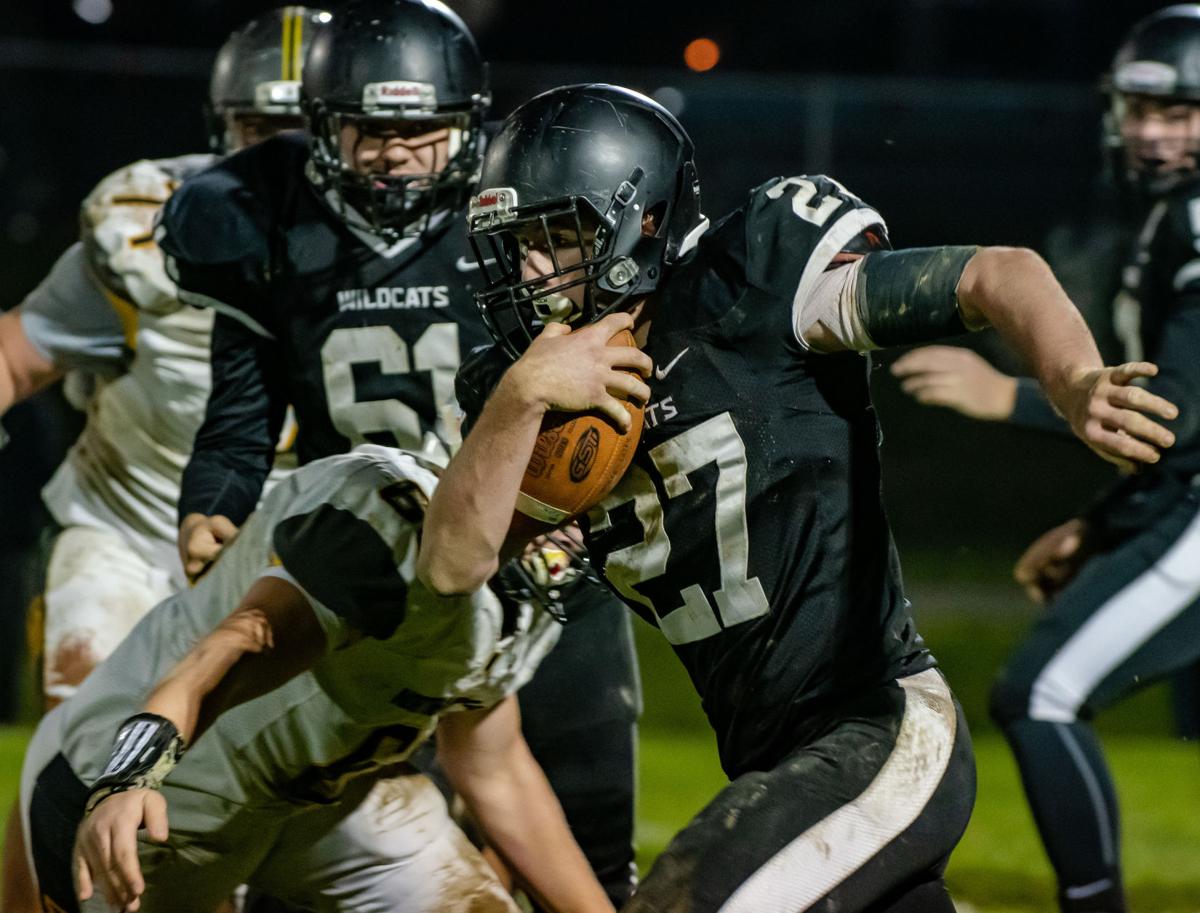 HOMER CITY — When Homer-Center and Northern Cambria were tasked with taking each other on in the first round of the playoffs, both teams felt a sense of relief knowing they’d be matching up with a familiar opponent.

However, both teams also felt a tad anxious about clashing with a conference foe because a lot had changed since the Wildcats beat the Colts just a little more than a month ago.

In an otherwise even game Friday night, sixth-seeded Homer-Center dispatched 11th-seeded Northern Cambria, 24-6, in a District 6 Class 1A first-round playoff game on a chilly night at Memorial Field.

The Wildcats beat the Colts 34-6 on Sept. 27, but since then have had to overcome injuries and a downslide after a strong first half of the season. On the other hand, the Colts seemed to find their footing and grew stronger as the regular season came to an end.

“There’s the familiarity, but I had an uneasy feeling all week because of the matchup,” Homer-Center coach Greg Page said. “When they came in about a month ago, they were kind of hobbled and (Adam) Kopera wasn’t at his best and (Mike) Hoover didn’t play. And they’ve been kind of on a roll lately. They’ve basically dismantled the last few teams they’ve played, and we’ve been the ones kind of hobbling over the last few weeks.”

Despite all that, the Wildcats managed to come out on top again and advanced to the second round to face third-seeded Juniata Valley (8-2), the defending district champion, next Saturday night.

“It’s an advantage, but it’s a completely different season now, and teams play differently in the playoffs,” Homer-Center quarterback Ben Schmidt said. “The stakes are much higher, so you never know what will happen. Not everybody gets to keep going and keep playing, and we’re able to at least play another week, so hopefully we can continue and go even further.”

Schmidt rushed for 145 yards on 15 carries and caught a touchdown pass to help lead the Wildcats after being hampered by injuries in recent weeks. Homer-Center finished with 203 yards on the ground, and Northern Cambria had 202, and both teams passed for 119 yards. Schmidt was 3-for-13 for 109 yards, and Hoover went 12-for-20 for 119. Kopera, the area’s second-leading rusher going into the weekend, ran for 115 yards on 25 attempts. The major differences in the game were just a few big plays.

“We knew what to expect,” Northern Cambria coach Sam Shutty said. “They did pretty much what we expected. We weren’t sure of the health of their team. We knew they’ve been battered. Obviously we were hoping they were a little more injured than they were. They obviously bounced back. Ben had a heck of a night on the ground. He’s a tough kid, and he does well for his team and made some conversions that really took us out of this game.”

Homer-Center wasted no time getting on the board. The Wildcats marched 69 yards in nine plays on the first drive of the game and scored on a 1-yard run by Justin Walbeck with 8:03 left in the first quarter. After forcing a Northern Cambria punt, Homer-Center put together another solid drive and scored on a 5-yard run by Walbeck that was set up by a 25-yard run by Schmidt. The Wildcats took the 12-0 lead with 3:17 on the clock in the opening quarter, and the score stayed the same going into halftime. Homer-Center had a 22-yard field goal blocked with three minutes remaining in the second quarter, and Northern Cambria failed to get in the end zone even though the Colts were able to move the ball.

“That’s been one of the things we’ve been dealing with all season is just not capitalizing on drives offensively,” Shutty said. “We had a lot of opportunities, but had a lot of little mistakes. We focused on the little detail things this week, and we talked about it extensively. But we just weren’t able to get it done tonight.”

The Colts took their opening possession of the second half 68 yards, a drive that was capped by a 36-yard touchdown run by Owen Prasko. The TD was preceded by a 23-yard run by Kopera and put Northern Cambria right back in the thick of things.

“We gave up two big plays on their touchdown drive,” Page said. “We had been playing really physical and did a nice job defending their run. Then, boom, the wraparound draw, which they’ve been running for 58 years. Then a nice jet sweep. They locked into us, kid got around everybody. You can’t give up those scores.”

But that was all the points the Colts managed to get. On the ensuing kickoff, Coby Daugherty returned it 76 yards for a touchdown to put the Wildcats up 18-6 with 7:03 left in the third. Daugherty then hit Schmidt with a 10-yard touchdown pass to put the game out of reach with 2:27 remaining in the game.

Northern Cambria ended its season with a 4-7 record and loses four linemen and Kopera to graduation in the offseason.

“He had been a backup player on offense for the last three years, and you just knew he had the talent,” Shutty said of the running back who holds the school records for most rushing yards in a season. “He finally got the opportunity, and he made the most out of it this year.”

The Wildcats now will set their sights on a Juniata Valley team and hope their health continues to improve throughout the week so they can give the Hornets their best shot.

“We’re excited. In playoffs, you live to move on. Your mindset should always be good and excited for the next phase because you’re still playing. That means you won the week before. We’re going to take a look at them and see how much film we can get on them. We’re going to meet, put a plan together and hopefully we have another great week.”